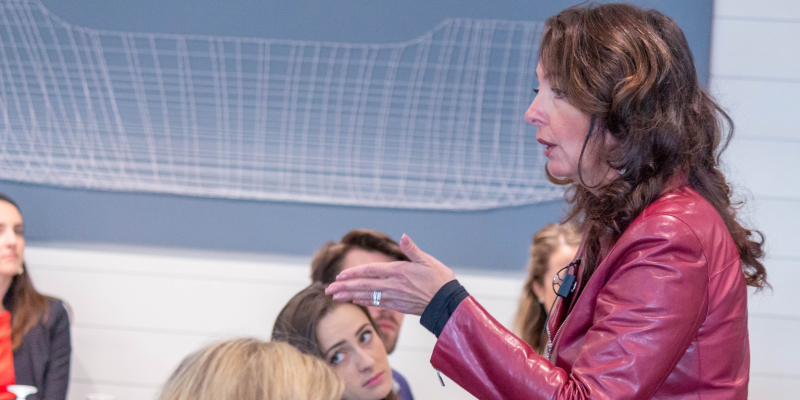 In a recent study of women in the workplace by McKinsey & Company, the consulting group reported that while for the last four years, companies have reported that they are highly committed to gender diversity, that commitment has not translated into meaningful progress. Women continue to be vastly underrepresented at every level, and only about one in five senior leaders is a woman.

With that as the backdrop, the role and empowerment of women in the workplace was addressed by globally renowned leadership speaker Holly Dowling recently at a special event in Burlington.

Hosted by the MBA Women for Change, a student group of the Sustainable Innovation MBA program (SI-MBA) at the Grossman School of Business, and Westport Hospitality, guest speaker and change management and leadership expert, Holly Dowling, led a spirited conversation about women in leadership at the Courtyard Marriott in Burlington.

The event was the brainchild of the MBA Women for Change; a group started in the fall of 2018 to promote and advocate for gender issues in the workplace within the SI-MBA program.

The idea for the event gelled when a personal connection to Holly Dowling surfaced, and the group saw the opportunity to host an event that not only started a conversation around these issues, but was an appropriate way to widen the discussion out into the community, strengthen relationships with other organizations such as the Vermont Women’s Fund, as well as raise the profile and awareness of the SI-MBA program itself.

“Holly was a perfect speaker for us, having an aligned focus and goals of getting women into leadership as a conversation and she gave us this gift with her time and energy to be able to come here” said organizing committee member Emily Klein.

Meryl Schneider, another committee member said “It was great to be able to invite other women from all over the community, friends and family, and men, to this event to take part in something like this.”

The event also provided a platform to build bridges, extending the network and encouraging collaboration. Alyssa Schuetz noted “It was great being able to establish relationships with other community groups like the Vermont Women’s Fund, the Burton’s women’s group as well as with our donors, to further connect and establish lines of communication.”

She continued “We deliberately invited men and asked Holly to tailor the conversation so that it was inclusive to all genders, so everyone could get the benefit. Because we know that it’s not just the women who have to make a change, men are a huge part in this. We wanted to make it as open and accessible to as many people as possible."

Meg Smith, Director of the Vermont Women’s Fund, a nonprofit organization that provides support for women’s economic self-sufficiency, entrepreneurship and an event sponsor said “This event that brings people together to have a conversation is important as everyone gains strength from one another. The realization that by collaborating, the sum is greater than the parts. There is an ongoing need for women in the workforce, and to create an inclusive, friendly workplace. My organization is focused on positive change for women, but it cannot happen in a vacuum, you cannot do it alone.”

With the success of this initial event, the group hope to continue their work including hosting guest speakers from the Women’s Center and an International Women’s Forum dinner with PhD students and the dean from UVM’s Rubenstein School. The group also realize that with the SI-MBA program being just one year, it’s a challenge to maintain momentum from cohort to cohort.

They plan to stay involved after graduation and provide assistance wherever possible, as some from previous cohorts have done, and hope that future cohorts will continue to build out the work of the group, and keep advocating and pushing for gender issues and equality. 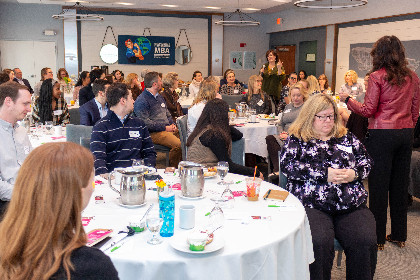