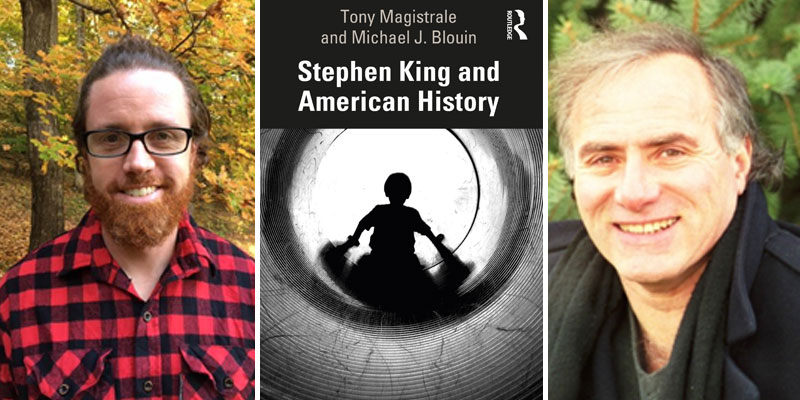 Killer clowns, haunted hotels, alien invasions. Stephen King, “the King of Horror,” has scared generations of readers with his wild and chilling imagination, amassing hundreds of titles and writing credits to his name along the way. If wading through the entirety of King’s corpus seems like an exhaustively bad dream, then Michael Blouin ’06 is living in a nightmare.

“I had to look at his whole body of work, which is a very considerable amount of work. He's very prolific. But I think to prove your case you really have to have as much evidence as possible,” Blouin says of his new book, “Stephen King and American History” (2020 Routledge), co-authored with UVM professor Anthony Magistrale.

The book is an exploration of how America’s violent and tumultuous history has influenced King’s writing. It brings to light repetitions of war, conflicts for natural resources, international interventions and grief, especially over the Vietnam War, that subtly appear throughout King’s canon. In fact, Blouin says once they realized how important war was to King as a writer and a person, it became “glaringly obvious” in his works.

In “Pet Semetary,” for instance, “there's a line in the book about how the train would speed through towns and drop off dead soldiers,” Blouin notes. He also calls attention to imagery of a highway and truck accident that act as a metaphor for the destructive oil industry  — “which has gotten us into so many wars,” Magistrale adds — and for the catastrophic costs of America’s unstoppable interests.

And according to Blouin and Magistrale, that makes total sense considering King’s formative years at school. As a student at the University of Maine in Orono during the 60s, he narrowly avoided the draft and began to question the version of the American Dream the generation prior had known. Magistrale notes that King was ultimately disillusioned by America at the time, “both in terms of its official governmental policy and the use of the military, and the way in which the counterculture reacted to it,” that it jaded King’s outlook on America and the ways he writes about it.

If ever a time to publish a book about how life-altering, turbulent times left their mark on the King of Horror and his work, the year 2020 is surely it. Blouin and Magistrale, a former student-teacher duo dating back to the early 2000s at UVM, have long wanted to collaborate on a book together, but the timing was just never right. An opportunity arose while Magistrale was on sabbatical a few years ago, the same time at which Blouin had wrapped up a book on Stephen King and American politics. With all the Stephen King that Blouin had ingested, he found he still had strong material on the cutting room floor to work with. “It just seems like a perfect time to do it, like there wouldn't be another moment in time or that all of the stars aligned,” Blouin says.