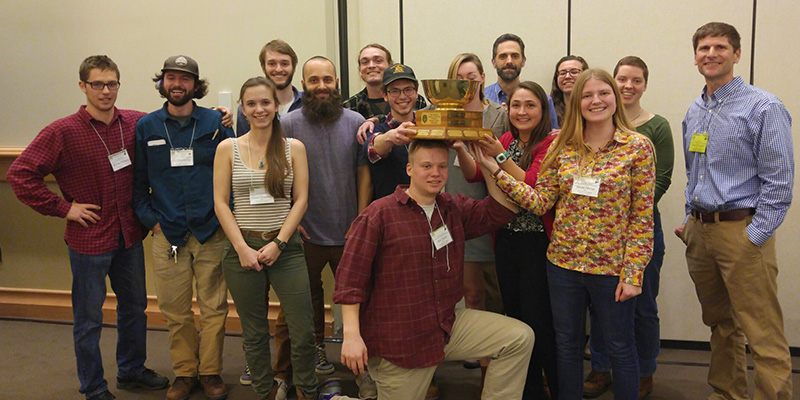 The Rubenstein School undergraduate team of Diana Gurvich, Helena Murray, Jonah Salzman-Cohen, and Katlyn Williard, won the annual Student Quiz Bowl. This is the School’s second victory in the past three years of competing at the New England meeting. The School also won the New England Quiz Bowl in 2015 with Katlyn on the team. Katlyn, Jonah, and Diana also competed at the National SAF Convention in November 2016 in Madison, Wisconsin with travel support made possible by 1976 UVM environmental studies alumnus Averill Cook.

“It's incredibly exciting because this is the third SAF Quiz Bowl I've participated in, so to me, winning the Quiz Bowl this year is a direct reflection of how much we've learned in the past year of classes,” said Diana, a junior forestry major and co-president, with Jonah, of the UVM SAF Chapter. “When we were preparing for the Quiz Bowl last year, I remember struggling to teach myself silvicultural terms without any background knowledge. This wasn't a problem this year after taking Silviculture with Tony D'Amato during the fall semester. Classes like Natural Resource Ecology and Assessment I & II, Silviculture, and Forest Ecosystem Health taught by Justin Waskiewicz, Tony D'Amato, and Kimberly Wallin, along with extra practice slides provided by Tony, set us up for success at this year's Quiz Bowl.”

The second exciting award went to Dr. Tony D’Amato, who received the New England SAF Mollie Beattie Young Forester Leadership Award given annually to a young forester, less than 40 years of age, who shows great leadership in the field of forestry.

The award was created in honor of Mollie Beattie, a 1980 University of Vermont forestry graduate alumna, who died in 1996, and who accomplished a tremendous amount at a young age in the fields of forestry and natural resources. Mollie Beattie served as the first woman director of the U.S. Fish and Wildlife Service, executive director of the Richard A. Snelling Center for Government in Vermont, deputy secretary for the Vermont Agency of Natural Resources, and commissioner of the Vermont Department of Forests, Parks and Recreation.

"I feel humbled to receive an award that honors a person who was such a great product of the UVM forestry program and outstanding steward of Vermont's landscapes,” said Tony, a Massachusetts native who joined the Rubenstein School faculty from the University of Minnesota in 2015 and began advising the student SAF Chapter. “This award truly reflects how fortunate I have been to have crossed paths with so many amazing people over the years, ranging from my undergraduate forestry professors to the students and foresters I get to interact with each day in my current job. Getting to serve a profession and discipline you love is a great privilege, particularly when surrounded by the wonderful forestry community we have here in New England."

As co-director, with Professor William Keeton, of the Rubenstein School undergraduate forestry program, Tony’s leadership is helping to change the face of forestry in New England and has helped to actualize the University of Vermont’s application for SAF accreditation, an effort being led by Dr. Keeton. Last spring, Tony organized the first annual UVM Forester’s Day and hosted an alumni panel this fall to highlight the profession of forestry. He has also mentored a number of graduate students at UVM and the University of Minnesota.

“Tony is addressing the social challenges we face by raising the profile of forestry and re-defining it as an updated, relevant field for students looking for a way to help the environment,” wrote Dr. Paul Catanzaro, extension associate professor at the University of Massachusetts, Amherst, in his letter nominating Tony for the award. “Tony is training the next generation of foresters and showing them the value of involvement in SAF. He has brought a renewed excitement for forestry and SAF to UVM.”

Tony demonstrates strong leadership at the state, regional, and national levels of SAF. He is the Education Chair of the Green Mountain Division Chapter of SAF, a member of the NESAF Program Committee for the 2017 winter meeting, Forest Science coordinator for NESAF, Forest Ecology subject-matter editor for the Journal of Forestry, and was a member of the Planning Committee for the 2015 SAF National Convention and committee co-chair for the 2016 National Convention.

A highly-published researcher, Tony conducts an impressive program of silviculture and applied forest ecology research, which he is able to successfully implement on the ground.

“Tony possesses a rare ability as an academic to translate science into practical, on-the-ground recommendations,” wrote Paul. “He can often be found out in the field with county foresters, industrial foresters, and policy makers learning about their needs and sharing his work with them.  He understands that to have impact, we must reach critical local decision makers. He has also taken a leadership role in the Northeast Climate Science Center and through his leadership of research and practical implementation of silvicultural techniques, he is helping the forestry profession find ways to use silviculture to address the ecological challenges we face.” 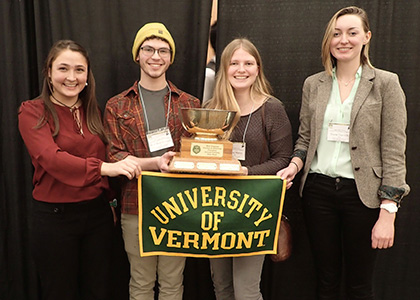 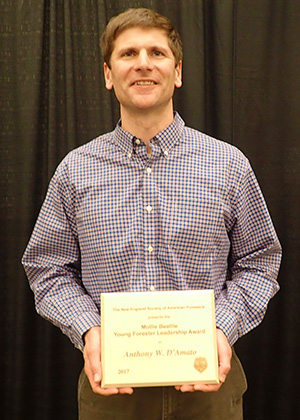 Associate Professor Tony D'Amato received the Mollie Beattie Award for his leadership in the field of forestry. Photo by J.P. Barksy.