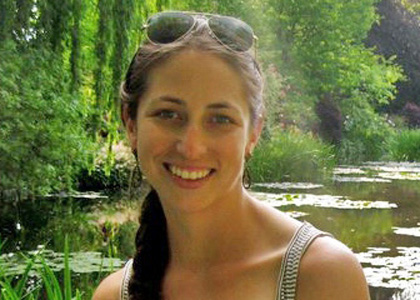 On any given day I might return to my office to find on my desk a local pear, an Italian pastry, a jar of crystalized ginger, or an inspiring quote. There is no name attached but I suspect it is Elise Schadler (MS-NR '12), a person who embodies a spirit of community in her thoughts, actions, and daily work as the Community Based Learning Coordinator in the Rubenstein School.

Elise joined the Rubenstein School initially as a Master's student studying urban and community forestry. She assisted me in an undergraduate diversity course where I learned that Elise is a list-maker, not just of daily tasks but big things, important things, goals that stretch and challenge and point to a desire to make the most of everything while bringing others along. Elise brought this mixture of creativity, community, and detail-orientation when she joined the RSENR Office of Experiential Learning (OEL) in 2011 to support community engagement initiatives in the School — service-learning courses in particular.

Support for service-learning in RSENR began in Fall 2005 with the creation of a Graduate Assistantship. In Fall 2005, RSENR faculty taught 16% of the designated Service-Learning courses across campus. This grew to 46% of all service-learning courses in Fall 2013. Our list of community partners numbers well over 100, many of these relationships built over several years and projects.

Elise has worked to support faculty, secure community partners, design projects, and facilitate reflection activities in several courses such as Sustainable Landscape Architecture, Adaptation to Climate Change, the Charlie Ross Environmental Public Service Practicum, and the senior capstone, NR 206 Environmental Problem Solving. In recent years, RSENR students have participated in over 100 projects annually with over 100 distinct community partners.  These experiences have often been cited by students as some of the most rewarding while at UVM.

In August 2012, Elise’s role changed through a collaboration with the Vermont Urban & Community Forestry Program (UCF). With UCF she supported Vermont municipalities in the management of their urban and community forests while at the same time connecting UVM students to these projects. It’s been a great match that has resulted in valuable connections between RSENR students and the larger community, including several paid internships.

In February 2014, Elise’s role changed again to become a full-time staff member with UCF. Of the things on Elise’s “Big To Do” list, I’m sure one of them was to affect greater change in communities and the natural environment across Vermont. Check.

Elise’s talents and accomplishments with the Rubenstein School would easily number over 100 small and big actions to build relationships and strengthen community engagement. She is poised to do even more for the State of Vermont. We wish her all the best and look forward to future collaborations!