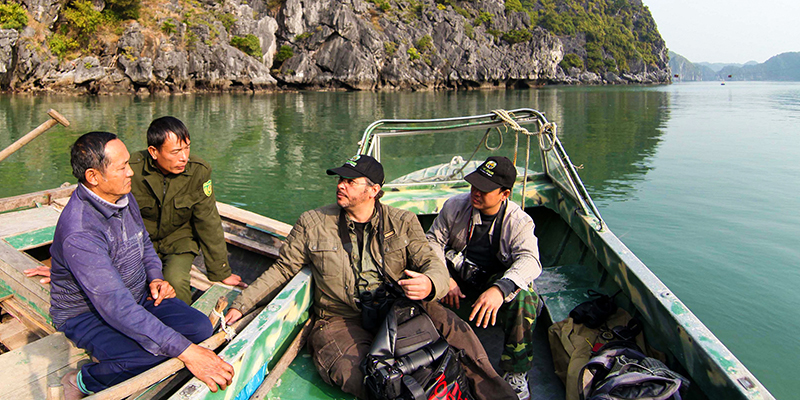 Neahga Leonard (MS-NR ’11) manages a project to protect the Golden-headed langur, a critically endangered monkey endemic to Cat Ba Island off the coast of northern Vietnam. His fight to save the species, also called the Cat Ba langur, extends to conserving its habitat and much of the biodiversity of the island and to conservation on a national scale.

In 2000, resulting primarily from poaching, only 53 of the close to 2800 Cat Ba langurs estimated in the 1960s remained on the island. The IUCN, the World Conservation Union, listed the langur as one of the world’s most endangered primate species. In 2014, Neahga arrived on the island as the manager of the Cat Ba Langur Conservation Project (CBLCP), founded in 2000 to halt impending extinction of the langur.

Neahga’s passion for environmental conservation grew out of a childhood spent close to the natural world in coastal northern California. His family frequently moved around the state and traveled throughout the U.S. and Canada during his youth.

“My exposure to a wide range of environments and ecosystems helped instill in me a good eye for patterns and relationships, seeing how things fit together, often in a similar way from one environment to another,” says Neahga.

Neahga turned his keen eye and passion for the environment into a Master’s degree from the Rubenstein School of Environment and Natural Resources in the University of Vermont’s Field Naturalist and Ecological Planning program. The unique curriculum matches students with real world partners and conservation projects. Neahga partnered with Shenandoah National Park in Virginia to develop a protocol to monitor rare plant species and changes in their distributions attributed to climate change.

“The program placed a great deal of emphasis on understanding the relationship and connections between the exploration of science and knowledge and the ‘real world’ concerns of environmentalist, farmer, politician, business owner, and the average citizen,” he says.

After graduation, Neahga worked for a short time in Vermont as a coordinator for the Staying Connected Initiative, maintaining wildlife corridors from upstate New York to eastern Maine and into Canada.

“This was particularly interesting work because it moved away from the traditional ‘buy, isolate, and protect’ version of conservation,” says Neahga. “The goal was to maintain both the wildlife connectivity and the working landscapes cultural aspect of Vermont.”

From Vermont to Vietnam, Neahga transferred his lessons in wildlife and habitat conservation to help in the fight to save the rarest primate in Vietnam and the third rarest in the world. A leaf-eating, tree- and cave-dwelling monkey, the Cat Ba langur, lives on the steep limestone karsts and in the dense interior jungle of the island in several isolated sub-populations.

Since its inception, the CBLCP has focused on species and habitat protection, population monitoring, law enforcement, environmental education, and research. Partnerships with Cat Ba National Park, established on the island in 1986, and local people in villages surrounding the park provide the foundation for direct community participation in the conservation effort.

Neahga battles overhunting of the langur for traditional medicine and sport, poaching, habitat loss and fragmentation, development, and poorly regulated tourism. He spends much of his time building long-term working relationships with local stakeholders, politicians, and government agencies.

“People are the most important part of conservation,” states Neahga. “Much of the job of conservation is to get people to change their behaviors and to convince government officials of the importance of conserving biodiversity.”

In Vietnam, rampant poaching of almost all plants and animal species has resulted in rapid biodiversity loss. Neahga supervises a team of four project staff who run regular monitoring patrols in Special Protected Areas of the island, assist Cat Ba National Park rangers, and coordinate with local citizens and landowners who help to keep people out of sensitive langur areas.

Outside of the Special Protected Areas, Neahga and his staff run three anti-poaching teams that go into the forest up to 22 times each month to collect and destroy illegal traps. These teams are made up of local villagers, unassociated with the park, many of whom are reformed hunters who also provide a vehicle for adult education in the villages.

“Our goal is to restore the Cat Ba langur population to a long-term viable number and to maintain the rich biodiversity of Cat Ba Island into the future,” says Neahga. “For me, this project is important more for how the conservation actions provide a window into the larger conservation issues of the region and offer a bit of leverage to address those issues.”

With support of the Vietnamese government, the Cat Ba langur’s special status allows Neahga and his team to work on a wide range of conservation concerns and protect not just the one species but many others, most of which would not otherwise receive attention. At the national level, the CBLCP has served as a model for development of other nation-wide environmental policies.

Neahga coordinates environmental education programs in seven schools on the island. These programs encourage an environmental awareness and ecological literacy among young students that is otherwise lacking in the region. He hopes that his efforts to educate and bring awareness to the plight of the Cat Ba langur as one of the most imperiled species in the world will help to curb biodiversity loss of other species on the island and throughout Vietnam.

“Biodiversity is sort of money in the bank when it comes to dealing with some of the major environmental changes coming down the line, climate change being a big one,” says Neahga. “Not all species will be able to adapt to the changes in the environment, so we need to have as broad and deep a pool of species as possible to maximize the ability of ecosystems to adapt to changing environmental conditions.” 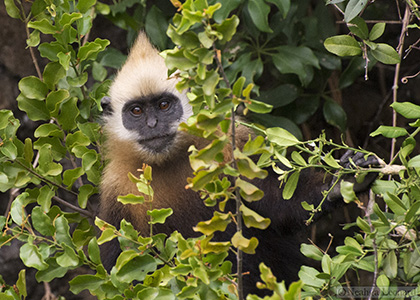 The leaf-eating Cat Ba langur, or Golden-headed langur, is the rarest primate species in Vietnam and the third rarest in the world. 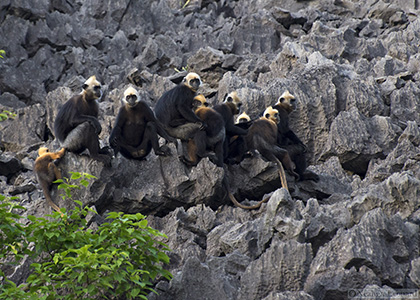 The langurs live in small sub-populations on the steep limestone karsts and in the dense interior jungle of the island.