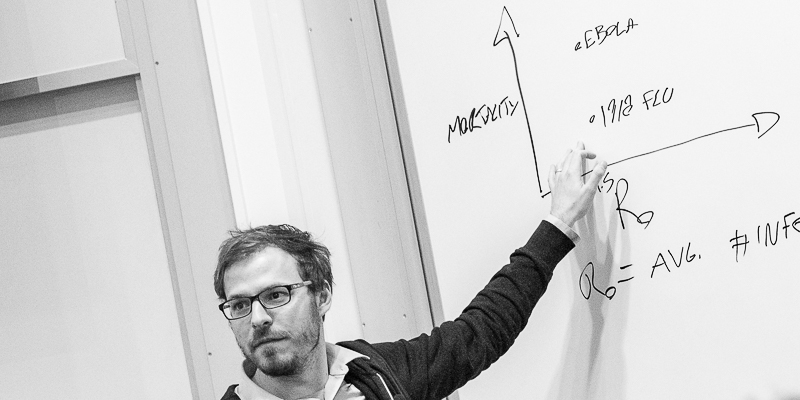 Sadly, it’s “a very busy time” to be a mathematical epidemiologist, says Laurent Hébert-Dufresne —professor of computer science at UVM and, yes, an expert on the mathematical modeling of epidemics.

And at the top of his to-do list he’s been speaking to reporters and other scientists—because he wants people to understand why it’s so important, during the Covid-19 epidemic, to close schools, shut restaurants, cancel concerts and empty cruise ships.

“A lot of people wonder if it’s necessary, if it’s reasonable,” he says, “and the answer is yes.”

Not all diseases are like this, but the novel coronavirus appears to “live at the mesoscale,” Hébert-Dufresne says—the scale of universities, hospitals, churches and other medium-sized gatherings of people. Therefore, attacking it at this scale is a more powerful and efficient way to stop the spread than simply relying on individuals to wash their hands and keep their distance.

The show must not go on

On March 9, Pearl Jam received global press attention when the band announced it was postponing their North American tour. Many people wondered if it was an overreaction. A few days later, Hébert-Dufresne and three of his colleagues posted a pre-print edition of a new scientific study explaining why these kinds of event closures were critically important. It didn't get quite as much attention as Pearl Jam, so here’s the gist:

Standard models assume that diseases simply move by diffusion through a pattern of random mixing. One-person-to-the-next-interactions are, of course, at a basic level, how the virus is spread. But Hébert-Dufresne’s work shows that more sophisticated models, that have “higher-order structures” built in, can identify how hotspots can build, say, within one school. In short, our real lives are not a web of random contacts but are organized around social institutions.

When an epidemic localizes around one of these kinds of structures, it could be that the odds of catching the virus “on the street,” Hébert-Dufresne says, would be 1 in 10,000, but in that school it might jump to 1 in 10. “So it makes sense to focus our interventions on these larger structures,” he says, at least as much as on individual behaviors, like hygiene. If an individual reduces their social contacts by 10% “we’re going to do roughly 10% better,” HD says. “It’s a linear return.”

And with a vigorous effort to close enough schools and cancel large gatherings, the “math makes it clear,” he says, that, at certain moments, an epidemic “can suddenly collapse.”