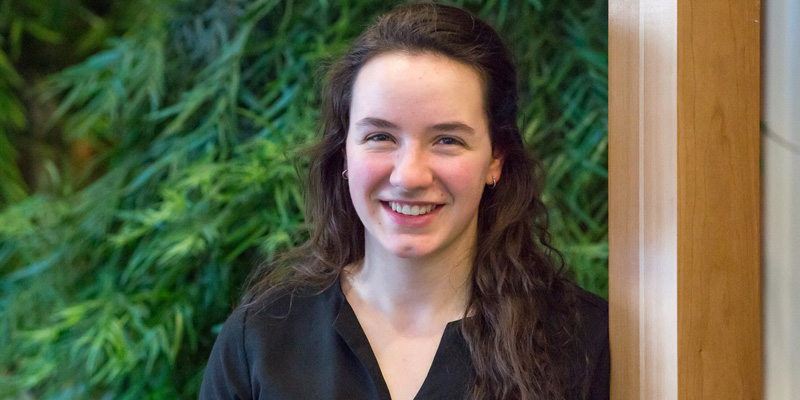 On Feb. 9,  the White House honored eight Americans for their extraordinary work to enhance climate education and literacy across the country. UVM student Gina Fiorile was one of them.

The eight “Champions of Change for Climate Education and Literacy” have been chosen, the White House says, for “inspiring students, educators, and citizens to learn about climate change and to develop and implement solutions.” Awardees include high school and middle school teachers, university professors, non-profit and national park workers. Fiorile is the only student.

As a high school student in Saranac Lake, N.Y., Fiorile was instrumental in planning the Wild Center's Adirondack Youth Climate Summit — the subject of the documentary The Resilient Ones, produced by Mountain Lake PBS and Bright Blue EcoMedia with Jon Erickson, UVM professor of ecological economics. The summit educates students and their teachers about the impact of climate change and invites attendees to create climate action plans to lower the carbon footprint of their own schools.

As a University of Vermont first-year student majoring in environmental studies, Fiorile has helped Erickson bring that model to Vermont. She served as a consultant to Erickson’s ecological economics course this past fall as they planned the first annual Vermont Youth Climate Summit, which brought together 150 Vermont high school students and dozens of teachers to UVM in December. The summit was hosted in partnership with Sen. Bernie Sanders, who kicked off the event by charging Vermont high schools to take the lead in climate action planning in their communities.

Not only has the youth summit model migrated to Vermont, it’s also been chosen by the White House Office of Science and Technology Policy to become a national model for climate change education. This year, 10 Youth Climate Summits will be held throughout the U.S. and five in other areas of the world, engaging more than 1,000 student leaders. Selected teams will then participate in a major internet-based youth conference at the United Nations Climate Change Conference this year.

It was UVM’s strength in environmental studies, and her interaction with Erickson and other faculty on the documentary, that attracted Fiorile to the university. “Vermont is a great place to be studying the environment,” she says. Fiorile is an Aiken Scholar, a UVM program for high-achieving, highly motivated students in the Rubenstein School for Environment and Natural Resources who are given an opportunity to begin to define themselves as environmental professionals, and to connect their academic interest in the environment to their residential and extracurricular lives. She’s also found a home on the figure skating team and as a member of the Catholic Student Association.

“I was in shock,” Fiorile says, when she heard she had been selected for the White House award. “There are so many students here at UVM who work so hard on climate change issues, and it’s an honor to be representing them.”

The event included remarks by White House officials and a discussion with the champions moderated by Marshall Shepherd, the Georgia Athletic Association Distinguished Professor of Geography and Atmospheric Sciences at the University of Georgia and host of The Weather Channel’s “Weather Geeks.”

After the panel discussion, Fiorile participated in a breakout session with K-12 students active in their schools around climate change issues. Her favorite moment from the day: meeting John Holdren, senior adviser to the president on science and technology. He, along with Gina McCarthy, head of the Environmental Protection Agency, were in attendance during the breakout session. "It was cool," Fiorile says, "that they took the time to listen to youth and hear our opinions."

Reflecting on the day while on a train back north, Fiorile said of the honor: "It solidifies my passion for climate change mitigation. As an environmental studies student, I learn a lot about water usage, ecology and wildlife. Climate change affects all of those things. We need to get to the root of the problem. That's something I want to tackle in my career."

Amanda Kenyon Waite
“There are so many students here at UVM who work so hard on climate change issues, and it’s an honor to be representing them.”

Learn more about the White House Champions of Change award 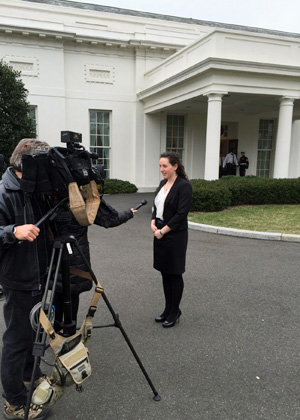 Fiorile being interviewed outside the White House.