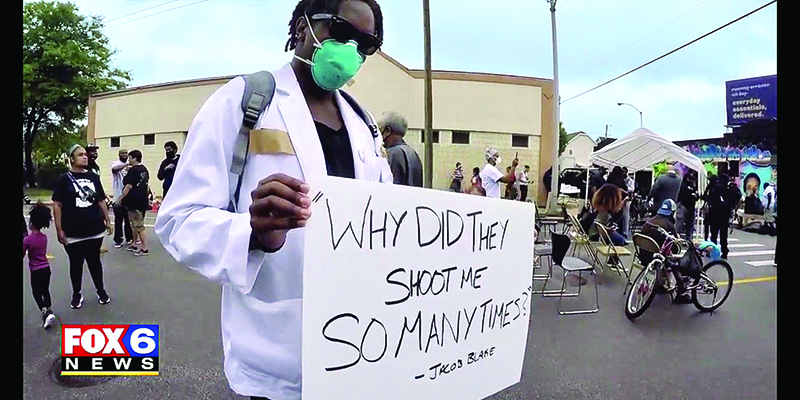 “Why did they shoot me so many times?”
Jacob Blake asked his father as he began to regain consciousness in the ICU after he was shot seven times by the Kenosha Police. His father fought back tears as he struggled to answer a question so innocent yet so remarkably tragic.

“Why did they shoot him so many times?”
Maria Hamilton thought to herself as she sat at a memorial service for her son, Dontre Hamilton, who was shot fourteen times by the Milwaukee Police six years ago.

“Why do they shoot us so many times?”
I shouted, with all the ferocity that question deserves, in unison with more than one hundred protesters, on a sunny day as we marched through the streets of Kenosha, Wisconsin. This question became the newest chant for a movement that has turned the final words and names of Black lives cut short by police brutality into a rallying cry for justice.

I’d just made the long drive from Vermont to Wisconsin, motivated by a deep need to add my voice to the protests, a small gap in my clinical schedule making that possible. The situation in Kenosha felt especially close to home. Born in Detroit, I’m a Midwesterner at heart. Today, my parents live in northern Illinois, just across the state line.

As my voice began to crack from the four hours of continuous shouting through my N-95 mask, I found myself breathless. The irony of my brothers and sisters in arms chanting “I Can’t Breathe!” was certainly not lost on me. I stepped away from the group and pulled down my mask. With my eyes closed, I enjoyed every bit of the Lake Michigan-infused air that effortlessly coursed through my lungs as I deeply inhaled. I opened my eyes to find a water bottle being held in front of me.

“You’ll never survive these without this…Here!” said the woman, gesturing the bottle my way. “I should have known better—Thanks!” I said, as I took the bottle without hesitation, “I guess I’m new to this.”  “Ain’t nothin’ wrong with that, all of us get that inspiration to march sooner or later… You from here?” she asked. “Twenty minutes south of here, but I just pulled in from Vermont…How about you?” “Wow! Vermont?!” her eyes widened. I chuckled and shook my head in agreement, acknowledging the random nature of my presence here from the remote state. “Me? Well, I’m from Milwaukee, but I just got back from walking out here to D.C. for the March on Washington!”

I looked at her in amazement. I asked her to repeat herself in case I misheard her, but I hadn’t. She, along with twenty of her fellow activists walked 750 miles to raise awareness about police brutality and racial inequality. The march was inspired by George Floyd, but it was accelerated by Jacob Blake, whose shooting occurred only days after they left Wisconsin. By the time they made it to the National Mall, their twenty-person group had grown to a crowd of more than seventy. And after all that, she is still marching. Her infectious energy and unwavering devotion to social justice reminded me of the incredible people leading this revolution.

On a stormy Saturday in Milwaukee, I joined the Blake family in another march and rally. “All this rain don’t stop the pain!” an activist shouted through her bullhorn, galvanizing the more than 150 people gathered in Martin Luther King, Jr. Park, despite the miserable conditions. I stood in my Larner College of Medicine white coat carrying a sign with Jacob Blake’s famous question “why did they shoot me so many times?” As I waited for the march to begin, I noticed a tall Black woman in a long black coat with a large afro waving at me. Confused, I looked behind me for someone the wave could have beckoned. Seeing no one, I returned my gaze her way and pointed to myself. The woman nodded her head and continued to gesture for me to come her way.

The woman, a reporter for a national newspaper, introduced me to Maria Hamilton. Ms. Hamilton wore an afro that was smaller than the reporter’s but more vibrant with its purple color. The reporter wanted a photo with me holding my sign with Ms. Hamilton. Greater meaning rose from the words written on my sign when it was being held by a mother whose son was shot fourteen times by the police.

After the photo was taken, I turned to Ms. Hamilton and expressed my condolences for the loss of her son. I also relayed my immense gratitude for her presence on this rainy day. “We are a beautiful people,” she said. “We are powerful. And we can win if we stay together.” For a mother that has been through so much, I couldn’t help but be struck by the optimism and strength in her voice. Our conversation was interrupted by the reporter who brought us together. The Blake family was gathering for a photo with the civil rights leaders who came to support the march—Ms. Hamilton was one of those leaders. I thanked Ms. Hamilton again, and watched her join the Blake family.

“How can they do this?” I asked myself as I watched the mothers and families of those tragically lost lock arms for the picture. I tried to put myself in Ms. Hamilton’s shoes, and envision a life after such a horrible death. How does she stay so strong? It didn’t take long for me to find the answer. As the group continued to face the camera, two young men came to the front and held a flag that bore one word—Unity. Ms. Hamilton stands united with Ms. Blake because Ms. Garner (mother of Eric Garner) stood with Ms. Hamilton. Ms. Garner stood with Ms. Hamilton because Ms. Martin (mother of Trayvon Martin) stood with Ms. Garner. Ms. Hamilton was so confident about our power as a people, and our potential to win so long as we stick together, because she experienced this power firsthand. All the mothers and families of the martyrs of this movement have stood united so history does not repeat itself. They’ve found strength in their numbers, turning their collected pain into policy and action.

As we chanted “United we stand, divided we fall” through the streets of downtown Milwaukee, the rain started to dissipate. Moments later, the sun broke through a patch of clouds and lit the path for our march to continue. I took this miraculous moment as a sign of changes to come. As we continued to march, my water-loving friend from Kenosha led our way as she proudly proclaimed, “We are ready for change!”

This essay originally appeared in the UVM Larner College of Medicine Blog. A previous essay by Christopher Veal, “At the Intersection of Fear, Grief, and Love” was recently published by the Annals of Internal Medicine.