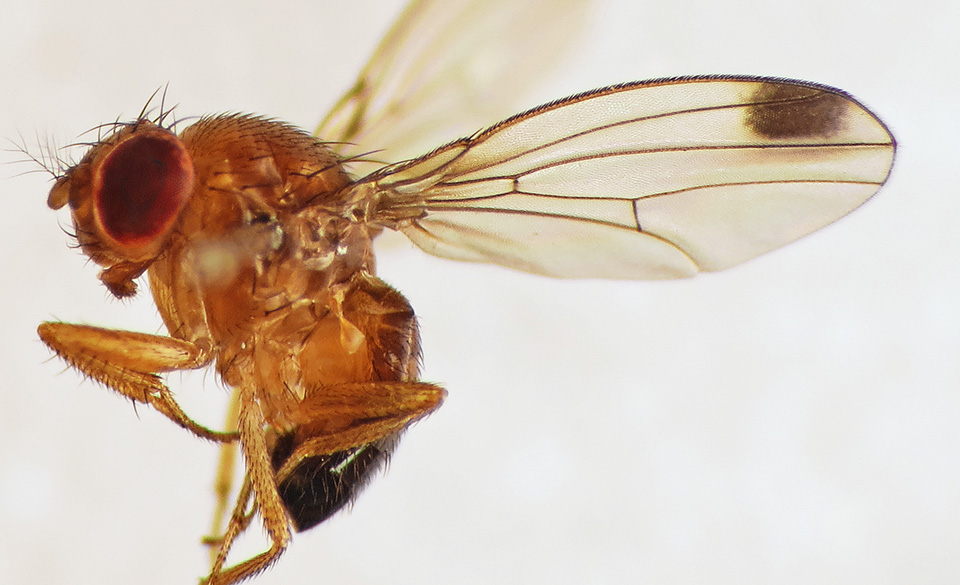 The University of Vermont Extension Master Gardener Helpline has received several calls recently from Vermont gardeners complaining about their blueberries getting soft right after picking. This is likely a result of an infestation by a pest called the spotted wing drosophila (SWD).

This small fruit fly first showed up in the state in 2011 just after Hurricane Irene and has caused problems in all soft fruits, especially those that ripen late in the season such as blueberries, fall raspberries and grapes.

The fly overwinters in Vermont, and as the fruit starts to ripen the female lays an egg, cutting into the fruit with a saw-like ovipositor. The eggs hatch and develop into small white larvae or maggots that feed on the inside of the fruit.

After 10 to 14 days, the larvae turn into adults and fly away to mate and lay more eggs. Each female can lay up to 300 eggs in her lifetime and as a result, populations can build up rapidly as the season progresses. The injury to the fruit during egg laying allows fungi and bacteria to get into the fruit and cause the berry softening and rot.

Home gardeners can try to avoid the pest by planting cultivars that ripen earlier in the season when the SWD populations are not as high. To minimize damage, gardeners should pick ripe fruit daily and chill immediately. When berries are left unharvested or allowed to drop, the larvae continue to complete their lifecycle and increase the adult population.

To test if your fruit is infested with SWD larvae you can perform a simple salt test by putting at least a cup of berries in a sealable bag and crushing lightly. Mix up a salt solution with the proportions of one cup salt to one gallon of water and cover the berries.

You can add food coloring to provide more contrast, but it is not necessary. Seal the bag, removing as much air as possible and let it sit for 30 minutes. Place the bag against a dark surface with good lighting to check for small white larvae.

Although there is no harm in eating a few larvae, chilling or freezing the fruit immediately after harvest will slow or stop egg hatch and minimize larval growth and fruit rot. Insecticides are available for control, but a better option for home gardeners with a just a few plants is to exclude the female fly with netting as the berries begin to ripen.

Using netting with holes smaller than one millimeter is necessary to exclude the pest. You need to place this over the plants just before the fruit ripens. Secure the bottom of the netting, sealing it at the soil line so no adults can slip in under the nets. Remove the nets during picking and replace immediately after.

Netting - rather than insecticides - is a viable practice for homeowners. Image: UVM Extension.