‘Archaeology of us’ explored in seminar for first-year students 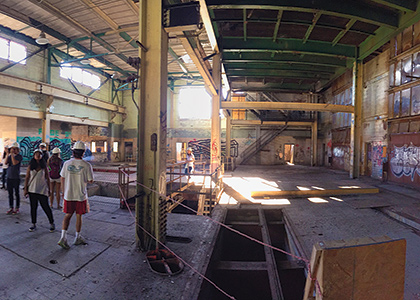 Soot-blackened brick and rusted girders, a cavernous industrial space that for decades has been appealing only to damp pigeons and brazen graffiti artists, Burlington’s defunct Moran Power Plant still endures along the city’s revitalized waterfront.

For a course focused on contemporary ruins, it would be hard to invent a better field trip. Fortunate for Scott Van Keuren, associate professor of anthropology, and the nineteen students in his Teacher-Advisor Program Seminar, that Moran sits little more than a mile from campus. Even better that a pair of young UVM alumni, Tad Cooke and Erick Crockenberg, lead an ambitious effort to creatively re-purpose Moran in a way that would preserve the vibe of post-industrial funk but fill it with twenty-first century Vermont virtues such as local food, sustainable energy, public recreation, and the arts.

In the thick of fundraising efforts to make their vision reality, Cooke and Crockenberg were happy to take Van Keuren and his students on a tour, showing off the building that intrigued them and inspired their Moran endeavor when they were undergrads themselves.

The field trip was followed by a writing assignment, crafting an op-ed piece arguing for the plant’s preservation or tearing it down, that helped the students begin to develop and articulate their thoughts on the place of modern ruins in our society.

For Van Keuren, the youthful ruins of Moran and the like are a departure from his career focus as an archaeologist studying ancient Pueblo societies in the American Southwest. But contemporary archaeology, AKA “the archaeology of us,” has long been an interest in the back of his mind. As he came to see connections between this direction of study and UVM’s broad institutional focus on sustainability, the class seemed like a natural.

The Teacher-Advisor Program, seminar-style courses for first-year students in which the professor doubles as their academic advisor, is proving to be a good fit. Activities such as field trips and occasional dinners downtown together as a class narrow the gulf between teacher and student, Van Keuren says.

Students Kelsey Crocco and Colin Serra have high praise for how the teacher-
advisor model has played out in the “Ruins” course. They cite the small class size, chance to develop a closer relationship with their advisor, and guest speakers who help them navigate college life. “If I’m going to TAP class at least two times a week, that’s two more times I can talk to my advisor,” Serra says.

Growing up at the edge of an abandoned industrial district in Dallas, Texas, first fed Van Keuren’s interest in archaeology. As a teenager, he would explore the darkness-on-the-edge-of-town landscape of weedy railroad tracks and derelict warehouses. “The decay—sort of watching this place fall apart—drew me in. But it was also the silence, thinking about the things that had happened in those places, wondering about the experience people had there,” Van Keuren says. “It was really that first exploration of being around these abandoned places that got me interested in ruins, so this is coming full circle.”

Circle completed, as Van Keuren and his students study modern ruins this semester, they are part of a well-established trend that did not exist when the professor was a teen kicking around his dying Dallas neighborhood. There is now a vocabulary around this —“Detroitism” and “ruin porn”—that gets at what draws many to these spaces that are at once frightening and familiar.

The “Ruins” course syllabus spans thick academic articles to popular films. Van Keuren added another dimension with the computer game “Elegy for a Dead World,” in which gamers walk through a ruinous landscape and write a script for what they’re experiencing. “It’s almost like an archaeologist writing a narrative during exploration,” the professor says. (Nineteen complimentary licenses from the game’s developer gave each student a free ticket to the apocalypse.)

While some modern ruins, like the Moran Plant, are obvious, others are more subtle. Van Keuren mentions one of his local favorites, the never-used/abandoned section of the Southern Connector highway, or the way a walk through Burlington’s Intervale reveals scraps of the past—farm machinery to refrigerators, cars to homeless encampments—poking from the bottomland.

“We’re surrounded with all this stuff,” Van Keuren says. “That’s what the class is about. I want the students to see these objects and places. I want them to think about what ruins do to us and what we do to ruins.”