As the University of Vermont marks the fiftieth anniversary of the men’s hockey program, we asked five alumni to share memories of their days on the ice in a Catamount uniform. 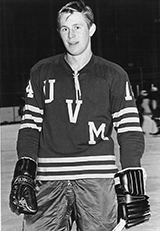 The future of men’s varsity hockey at UVM was ready to take a turn with the start of the ’67-’68 season. Coach Jim Cross’s system of hockey was now well established, and with a strong group of seniors led by captain Jack Semler and the first fully recruited class of sophomores, it was time to start winning games. During that season there would be two important tipping points.

The first point came with a return match against Brown University. Having been thoroughly trounced the year before (14-2) by Division I Brown, UVM was not going to be embarrassed again. With five seconds left in the game, Brown scored the winning goal and was lucky to escape with a 2-1 victory. A moral victory for the Cats! The second turning point came with the last opportunity the seniors would ever have to secure a victory against in-state rival Middlebury College. Having lost seven straight times to the Panthers, it was time to let them know the UVM program was coming of age. In overtime, the Cats not only beat one of their main rivals for the first time (6-5), but also secured the first winning season in UVM’s short history. The foundation was now in place for continued success of UVM hockey. 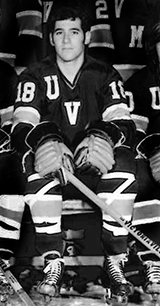 The memories blur over decades, but for the guys who became part of UVM's first championship team what was truly special and what formed a lifelong bond was the shared  journey. From freshmen who had to practice at 6:15 a.m., trudging across what we called the “tundra” in the darkness and wind chills, sometimes at fifty-below, to Gutterson. To seniors who played before delirious, stoned, booze-fueled fans packed into the Gut, whose intensity helped take us to championship levels.

But the deep-forged bond I felt at this fall’s reunion for every class was something I did not expect to find: love.

Hockey players and love? But there it was. It made me think what were the things we all shared and understood—without words—that connected us, all of us, over time, distance, and life.

The ups and downs of life touch us all, tragedies and triumphs. The golden days of our college hockey experiences at UVM are wrapped with special cloth. All of us shared what's in that package, it's a special gift to have on hand. It's OK to treasure it, because it only gets better with the passage of time. 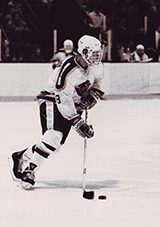 Over the years, memories of specific games and details blend together, but the special energy and feeling of support I always felt from the Gutterson faithful remains very vivid for me.  It was so inspiring to arrive at the rink two hours before game time only to be greeted by lines of enthusiastic fans waiting to be the first ones in when the doors opened.  Our locker room was under the student end at the time, and as soon as the fans were allowed in, we could hear the pounding of feet sprinting up the steps and rushing to the prime seats. For all of us, it was both a signal that game time was approaching and, more importantly, that we had some of the best fans in college hockey.

To this day, I also remember very clearly my spot on the ice during the national anthem. The team always lined up in the same way and I was on the far end along the north side of the Gut. Each game, at a specific point during Rufus Patrick’s singing of the national anthem, I would glance up in the bleachers and make eye contact with the same faces.  It wasn’t until my junior year that I actually met the families that, game after game, would share a friendly smile. One was the Child family—Ted, a former UVM hockey great from the championship teams in the seventies, Dina also a UVM graduate, and their three kids, two of whom, along with their dad, I still play pickup hockey with today. The other couple was David and Judy Hershberg, also both UVM alumni, who have since become wonderful friends as well.

From the day I stepped on the ice at Gutterson as a freshman in 1985 to today, in my administrative role  in the Athletic Department,  UVM Hockey has been a major part of my life. My relationships with teammates, coaches, and with fellow alumni are some of the strongest friendships that I have, and I feel very fortunate to have had the professional opportunity to remain so closely connected to this incredible program. 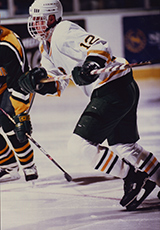 When asked to write a little something regarding my playing days at UVM, I smiled inside. After playing hockey from the time I was three until age thirty-four, there is no place like playing at The Gut!  My two-year-old son may have said it best when he described a game he went to recently—"loud."  There were so many times we would be sitting on the bench, looking at each other in awe at the excitement of the fans and the energy flowing through the building at all times during every game. After graduating from UVM, I have played with players from various colleges and universities and they always remember the games at The Gut. Players from Dartmouth loved playing us in their building because they would finally have a game with a sold-out crowd due to all the UVM fans who drove down to Hanover.

In trying to think of a particular moment that stands out (which is very hard because there are so many great moments), it would have to be driving downtown for dinner after we beat Lake Superior State to advance to the NCAA semifinals and hearing the radio station talk about our game.  Not only the feeling of what it was like to be a part of a group that worked so hard together for years, but to feel the support and gratification of the community was amazing

Since that time, I have met numerous people across the state who mention they can remember exactly where they were when they watched the Frozen Four game. To the fans of UVM hockey, this is more than just a hockey game but a part of the Vermont culture.  I feel very fortunate and am very thankful to have been a part of such a tradition. 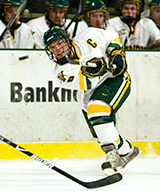 My tenure at UVM was from 2005 to 2009. I haven't had a bad year yet in my life, but those four outweigh the rest hands down. There are many integral positions when looking at the hockey program at UVM. Players, coaches, event planners, media personnel, facility managers, the list goes on.  My experience at school wasn't just about playing hockey and going to class. It was about getting to know everyone involved and getting an understanding that everyone was working together for our respective goals. To see how everyone interacted was an eye-opener for me and it was something I wanted to be a part of. As I observed, I notice two commonalities between most conversations—one was that everyone was respectful, and second everyone was laughing because there was always lots of joking. So to all of those people that showed me how to treat others, thank you!

In 2009, we were fortunate enough to be playing in the East Regional tournament in hopes of qualifying for the Frozen Four. We were in our second overtime against Air Force, when there was a somewhat unassuming shot taken at the net by Dan Lawson. After the shot, play continued. But soon after, people started to murmur and the cell phones were going off, all with the same trend—"I think that puck when through the net."  So we finally get a stoppage in play and ask the refs to re-watch that moment and see if the puck did, in fact, go through the net. Since we were in overtime, if the shot was declared a goal, the game would be over, and we head to the Frozen Four. It took the refs twelve minutes— twelve very long minutes—to finally come out and declare that the puck did go through the net for a goal, and the game was over. To see all of our players’, coaches’, fans’, and everyone else’s long, hard hours of work pay off in a single instant, was a truly unforgettable sight and feeling.