Out of the car 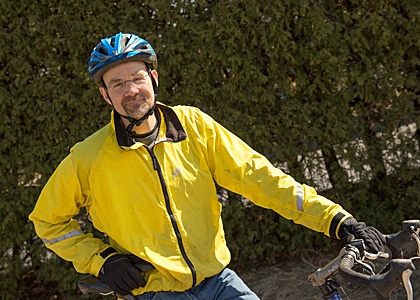 It may feel green, and it certainly is fun to slip behind the wheel of an electric car, but if we aim to build a truly more sustainable transportation system, one that reduces GHG emissions and addresses other social, physical and environmental impacts, we have to get out of our cars, electric or not, and use other forms of transportation. The answer lies not in switching fuels and power sources, but in reducing use.

Yes electric cars are cool. I’ve spent hundreds of hours driving these quiet, peppy and cool technology vehicles over the last twenty years. But the rush to put electric cars at the center of a new transportation system locks us into continued dependence on the automobile.

Instead of new technology (the easy answer) we need to adopt the electricity heuristic of negawatts—borrowed from Amory Lovins—and translate it to nega-miles. The cleanest, greenest, cheapest mile is the nega-mile, the mile not driven in a car. Walking, biking, public transit, car-pooling, all are more sustainable, and will have less environmental and social impacts than switching the fuels in our existing fleet of 300 million-plus cars and trucks.

Yet the attraction to EVs is real. The majority of transportation’s share of GHG emissions is us driving around in our cars and trucks. Switching fuels allows life to go on as is and potentially “plug-in” to cleaner energy. Anything else would be a major disruption. For example, today, more than three-quarters of us drive alone to work every day. Of the billions of trips made every day, more than eight out of ten of them are in a motor vehicle (84 percent).

But switching fuels does not address other issues associated with driving; such as congestion, urban sprawl and the impacts on human health and the social fabric of our communities.

And what about the almost ten percent of households who don’t own vehicles?  Or the elderly who outlive their ability to drive a car. Do we really want to endorse a car-centered world…?

Vermont’s visionary (in other aspects) Comprehensive Energy plan calls for 90 percent renewable energy by 2050, putting electric cars as its core transportation strategy, explaining it this way: “To achieve the transformation in transportation we envision we must: Reduce petroleum consumption and accelerate the switch to cleaner fuels, and PEVs.” The plan then discusses infrastructure and land use changes, fostering village centers and preserving Vermont’s scenic beauty.

And here is the problem with EVs as a central transportation strategy. Put aside the fact that most electricity in the United States is generated from coal and nuclear. That cheap natural gas will make it harder to develop renewables. That there is resistance in places like Vermont to new renewable resources (e.g. wind, bio-mass). That electric cars sales are lagging. That it takes more than ten years to switch a fleet over.

You can’t endorse and fund an auto-centered system and also expect other modes--walking, biking, public transit, car-pooling--to thrive. In Vermont, for example, we spent less than 8 percent of the total transportation budget (about $450 million in 2010) on providing alternatives to personal vehicle travel. Imagine for a minute if we spent $400 million on providing real alternatives to automobiles? If we gave people real choices? Safe sidewalks, transit systems that worked, bike routes that didn’t end?

Instead of automobiles (whatever they run on) we should put nega-miles at the center of our transportation focus. And here is the hopeful news. Even in a place like Vermont, according to an analysis of 10,800 trips by UVM’s Transportation Research Center, 39 percent of all trips were less than two miles and one-quarter were less than a mile.

In the early 1990s we logged tens of thousands of miles in EVs in Vermont’s cold weather and hilly terrain. Our electric cars become Vermont icons. Howard Dean famously “raced” U.S. Sen. Patrick Leahy at a Vermont event in 1993. The then Governor was quite an enthusiast. Vermont joined with New York and Massachusetts in signing onto California’s ZEV mandate—putting the state at the forefront of the battle to bring cleaner cars to the US.

We had fun doing it. Staging a demonstration at a National Governor’s event, putting an EVermont hat on President Bill Clinton, giving rides to school kids and politicians. In a project funded by the Defense Department’s DARPA we traveled tens of thousands of miles in Vermont’s cold weather and hilly terrain. GM said it could not be done. We said it could. And our converted Geo Metro’s (thanks to Solectria) became a pawn in the stand-off between California regulators—the feared CARB—and the Big Three (as they were then known).

But that was then. Then we were at the fringes. Today electric cars are at the center-piece of policy-makers transportation “solutions.” As President Obama said recently, we need new “technology to shift our cars and trucks off oil for good.” The year before he called for one million electric cars by 2015.

Electric cars can contribute to a cleaner world, but we should be wary of car-centered solutions. Social critic James Howard Kunstler, wrote in the Geography of Nowhere (1993) about what a car-centered world has brought: “The landscape is littered with cartoon buildings and commercial messages. We whiz by them at fifty-five miles an hour and forget them, because one convenience store looks like the next…We did not savor the approach and we were not rewarded upon reaching the destination, and it will be the same next time, and every time. There is little sense of having arrived anywhere, because everyplace looks like no place in particular.”

Richard Watts is a research assistant professor in Community Development & Applied Economics and the Transportation Research Center. This piece originally appeared on his blog: http://richard-watts.blogspot.com/