Racing Toward a Vaccine 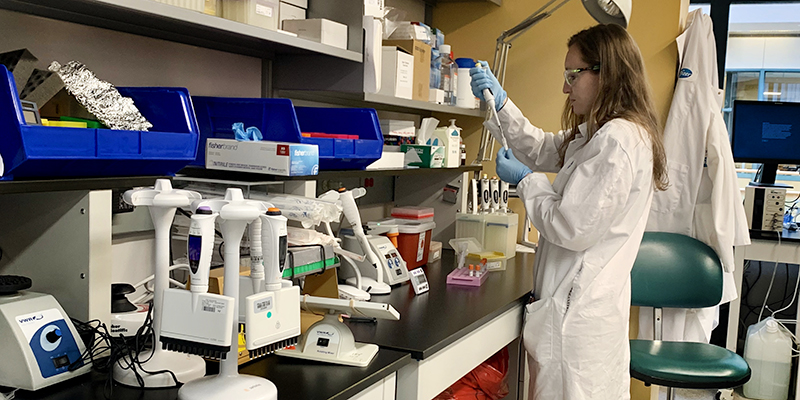 As researchers around the world inch closer to a COVID-19 vaccine, Estee Dilli ’15 is developing an assay for Pfizer to be used in clinical trials. At her bench in Nyack, New York, she determines what concentration of monoclonal antibodies to use for the assay. (Photo: Darryl Charles)

For as quickly as coronavirus spread across the globe, so too did claims of snake oil “cures” and home remedies to the virus. While we can’t attest to the effectiveness of some makeshift treatments circulating around the internet, we can say with confidence that the emergence of a true medical solution “does not happen in a short amount of time; sometimes it can take three to five years,” says Estee Dilli ’15, a senior associate scientist at Pfizer.

Right now, Dilli and a team of scientists in New York and Mains, Germany, are scrambling to develop a potential vaccine for COVID-19. But the admittedly long process is “on a very expedited track—things are able to progress at a much faster rate than I’ve ever seen anything move along,” she says.

When it comes to creating a vaccine, Dilli explains that there are generally two sides from which it needs to be approached: “One side is dealing with the live virus, which has to be done in special labs. The other side — my side — is the blood side or serology side of things. That part isn’t dealing with live virus, it’s looking more at the body’s natural immune response.”

As an assay developer at Pfizer’s vaccine research development site, she is currently working with blood samples, plasma and sera at her benchtop to establish the specific controls that will be used during clinical trials to measure the body’s immune response to COVID-19 or a future vaccine.

“If you’re working on a meningitis study, for example, you can’t expose somebody to meningitis," Dilli says. "With this, you can’t expose somebody to COVID-19. Once a vaccine is developed, you need a way to measure that it’s doing what it’s supposed to be doing. You want the vaccine to illicit the same immune response from the body as if it were fighting an infection. You want to be able to measure that your body’s responding the way it should.”

In the global dash to a vaccine, Dilli says it’s not uncommon for timelines and priorities to shift by the hour as they progress with their partners in Germany, as well as partners around the world. “It’s not just Pfizer; everyone is sharing what they know to work toward the same goal. Everybody is working on this as a compassion project in response to this global crisis. It’s an exciting time to be involved in this, but it’s a different way to work when there’s pressure behind it like that.”