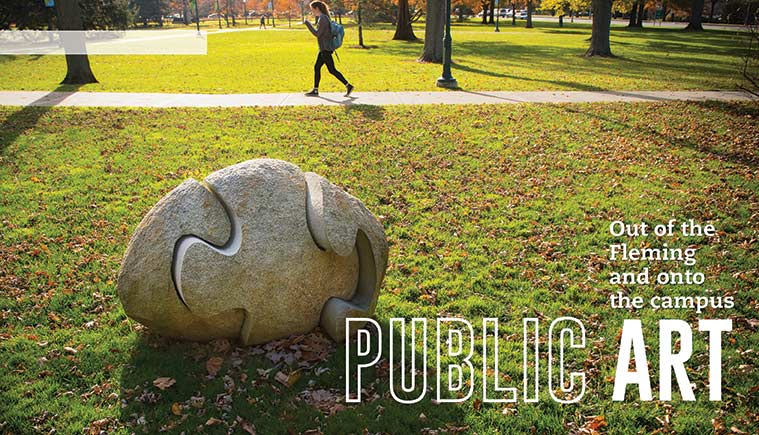 Alumni across generations remember them as backdrop to their UVM years, part of the campus landscape sure as the red brick of Old Mill or the tall pines on the Green. The late professor Paul Aschenbach’s “Tree of Knowledge” in front of Bailey/Howe, the “Lamentations” statues striding through the locust tree grove on central campus, the “Kindred Spirits” cones on the Fleming Museum terrace.

But let’s come clean. Rattle off a list of public art pieces at UVM, and you need not pause to catch your breath.

President Tom Sullivan is changing that. He and his wife, Leslie Black Sullivan ’76, are art enthusiasts and serious collectors who met while serving on the board of the University of Minnesota’s Weisman Art Museum. In a higher education career that took him from Washington University in St. Louis to the University of Arizona to Minnesota prior to UVM, President Sullivan has gained a deep appreciation for the power of public art.

“I see public art on a campus as a way to better understand and appreciate the value of the aesthetic. It’s much more democratic. We bring the art right to the people,” Sullivan says, adding that a student who has never visited the Fleming Museum might be inspired to step inside the galleries. “This is part of the educational and cultural experience at UVM.”

Janie Cohen, longtime director of the university’s Fleming Museum, is President Sullivan’s partner on the project—identifying artists, works, and walking campus to scout just the right spot for a new piece. Sometimes that creates a certain academic resonance, the case with Gordon Gund’s bronze whale flukes in front of the Aiken Building, home of the Rubenstein School of Environment and Natural Resources and across Main Street from the Gund Institute for Environment.

Other works nudge a new orientation to campus. Cohen smiles as she describes “Sparkle Pony,” a piece by alumna Kat Clear inspired by “My Little Pony,” a beloved part of many a Millenial childhood. Cohen likens the work to “simulated topiary.” A metal frame upholstered in artificial grass, “Sparkle” is built for that art-world term “interaction.” To toddlers, whose campus childcare teachers have made the new sculpture a fieldtrip destination, that means climbing in the saddle.

Building the campus collection through donor gifts and works-on-loan, President Sullivan is focused on enhancement of public art among his priorities in the years ahead. “We’re taking this into a new realm,” he says. The president is pleased with the progress, noting how a work such as Chris Curtis’s “Unlocked” has created a new focal point on the Green. Often when he walks past, the president says, he finds students sitting near the sculpture talking, studying, or just taking a quiet moment—“It draws you in.”

New York Times art critic Roberta Smith characterized public art as “a communal experience that is in some ways akin to movies or popular music in its accessibility.” And so it goes that each new piece of art installed on campus changes the communal experience of being a UVM student or alum just a bit.

Case in point: A graduation day photo of Michael Arnold ’17 in cap and gown, sitting proudly, and perfectly deadpan, on “Sparkle Pony” glanced across the Twitterverse. “Ride that Sparkle Pony into the sunset!” his friend Joe Craig wrote.

Michael may have been the first to grab this graduation day photo opp. He certainly won’t be the last.

Unlocked, Christopher Curtis ’74 (above)
University Green, Gift of Stephen and Petra Levin
“Unlocked” is sited on the UVM Green, just steps away from the Williams Hall studio where the sculptor cut his first stone under the instruction of Professor Paul Aschenbach. Curtis counts the late professor among the most influential people in his life. His voice—“keep chugging, you’ll get there”—remains with Curtis as he takes on a new challenge or learns a new skill. One of Aschenbach’s hammers, passed along to Curtis by the professor’s family, is a prized possession.  “A very personal tool I still use,” he says. “Of course, I think of him whenever I handle it.”
The artist is a native Vermonter, who has studied the geologic history of his home state. He counts “the discovery, selection, and recovery of the stone” as integral and enjoyable parts of his work process. “I take interest in the geological history of the stone I use as it helps contextualize humankind’s place in the natural world,” he says. “This is the core concept in my work.”
“Unlocked” is made of granite from Groton, Vermont, whiter than the famous Barre gray granite. Curtis says he sought “a classically shaped egg-like stone. Not exotic or flashy in figuring or shape. I knew the puzzle cutting was the essence and wanted to keep the focus on that.” 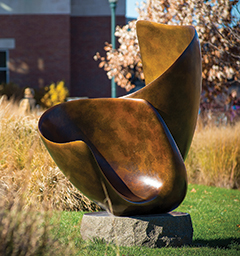 Gordon Gund’s interest in sculpture traces to his childhood, attending Saturday morning art classes at the Cleveland Museum of Art. He would study water color in college, become an avid photographer during four years in the U.S. Navy, and eventually find his way to sculpture when a friend introduced him to wood carving some thirty years ago. Gund increasingly turned his attention to art after retiring from a successful career in business and his family’s continuing philanthropic work, including support of UVM’s Gund Institute for Environment.
The sculptor, who is blind after losing his sight to retinitis pigmentosa in 1971, says, “While with my eyes I can’t see the shapes I create, I feel them over and over again with my hands and my mind, and the result is in my mind forever... It takes me more time and patience than most with sight and letting go is generally felt with more uncertainty. So, it is extremely satisfying to finish something that I have doubted along the way, woken up with in the middle of the night, spent a lot of time on and given a lot of love.”
The “Flukes” bronze at UVM is rooted in Gordon Gund’s experience helping to free pilot whales beached on Nantucket several years ago. 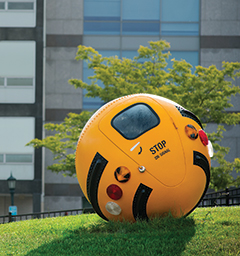 Across the past twenty years, Lars Fisk has stretched the possibilities of sculptural spheres as a core element in his practice as an artist. Parking lot ball. Subway ball. Storage locker ball. Mister Softee ice cream truck ball, to name just a few. “Bus Ball”—complete with classic green vinyl seats inside, and tail lights that illuminate—complements the square lines of adjacent 1950s-era Hills Building and sits near the just-opened residential complex on central campus.
Fisk’s career as an artist has included extensive stage set and festival design, working as art director with the UVM-born band Phish. His “Barn Ball,” featured on the cover of Phish’s 2002 CD “Round Room” is part of the Fleming Museum’s permanent collection, on display in the south lobby of the museum.
In a 2006 Vermont Quarterly article, Fisk considered how various ball projects have pushed him to tackle new materials and develop new skills. “I had to learn how to use metal. I had to learn how to sew vinyl. I had to learn how to make bricks out of mud so I could make my own curved bricks—and on and on and on from there. It was a lot of just winging it along the way, just learning as I went.” 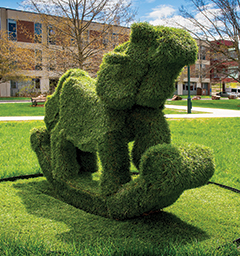 Take a walk around Burlington and you’ll stumble across the diverse sculpture of UVM alumna artist Kat Clear—from a huge metal sewing machine and quilt suspended from a wall in the south atrium of the UVM Medical Center to quieter works such as a bike rack on lower Church Street. And, from the Davis Student Center to Foam Brewers on Lake Street, her signage and signature commercial work shows up all over town.
“Sparkle Pony,” installed near Bailey/Howe, is rooted in the sculptor’s love of “My Little Pony” as a child of the eighties. Clear calls the work a “kid’s dream in a grown-up world.”
That duality comes into play with the materials, a hide of artificial turf over a metal armature. “Turf is a great partner to metal because it holds up outdoors just as well, if not better,” Clear says. “Conceptually, the turf is super-alluring, the lush green, and reminds me of being barefoot in the grass on a lazy summer day. But the reality is that turf is a bit itchy and scratchy, not as supple as real grass. Perhaps just like the fantasy of being able to jump into that television screen and hang out with my childhood ‘My Little Pony’ pals and suddenly realize I am not a kid anymore.”
Clear rattles off a list of the UVM artists/professors who influenced her—Bill Davison, Meg McDevitt, Kathleen Schneider, Frank Owen, Barbara Zucker, Ed Owre.  “While they have almost all since retired, I am still in touch with some of them, which is truly a gift, in an artist’s or anyone’s life,” she says. 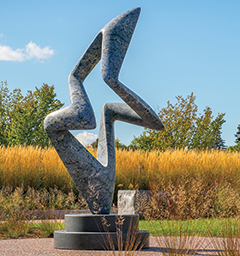 Sculptor Richard Erdman has a long relationship with UVM, dating back to his undergraduate days when he worked with two legendary mentors—artist Paul Aschenbach, who helped him find his calling, and varsity ski coach Chip Lacasse, who helped develop him into a two-time All-American in alpine.
Post-graduation, apprenticeship with stone carvers in Carrara, Italy, would also be key to Erdman’s development as an artist. Today, his work is on display in museums, and corporate and private collections worldwide. His monumental sculpture “Passage” sits at the entrance to the Donald M. Kendall sculpture gardens at PepsiCo in Purchase, New York. Carved from a 450-ton block of travertine, the 25- by 16-foot “Passage” is the largest sculpture in the world carved from a single block of travertine.
Erdman says the gift of “Areté Blu” completes a full circle with his UVM experience, a symbol of what the university gave him as a student—“where individualism and risk-taking were encouraged, where education was not just an assimilation of facts, but the training of the mind to think and dream.” Describing the particular work, the sculptor says, “Its emotive and energetic stance beckons visitors to live
actively, live dangerously, live passionately—and in its contiguous form, live in continuity.”
“Areté Blu” joins Erdman’s “Primavera,” a gift of the Class of 2010, situated outside Jeffords Hall. Erdman also recently gave the university two more pieces, “Confluence” and “Belladona,” that will go on display at a later date.