The Power of Invisibility

Quiet work in our ‘microcelebrity’ age 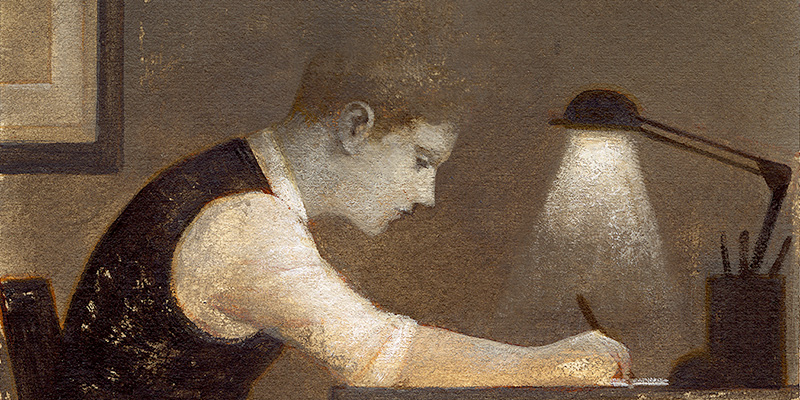 The United States, as is broadly acknowledged, has always been a nation of strivers and ingenuity. Anyone who’s made the effort to come here is a motivated individual. And for a long time this motivation gene has been in our cultural, perhaps even biological DNA, and still is in many respects. This American characteristic has two components. And just as the oars on both the starboard and port sides of a racing shell must move with equal force to propel the boat directly forward, the equilibrium of these two components has been crucial for the country’s advancement.

Component #1, or let’s call it the Port Side, is the Protestant work ethic of American lore, a nose-to-the-grindstone, silent determination. We saw it with the Puritans, the settlers out west, the stoical drive of our immigrant wave that bloomed in the decades around 1900 (by that time informed by more than Protestant traditions and heritage alone), and in the past century with the “company man” honorably satisfied with his role in the machine and the proverbial gold watch and pension at the end for a job well done. This “quiet dignity of the average American,” as David Foster Wallace once referred to it, is essential not only to our business acumen, but I’d argue also to one’s sense of self. Equally as important, however, is Component #2, the Starboard Side. This is our brashness, our Hollywood Klieg lights that reach to the world, our uniquely American noise. Not just the robber baron’s gilded mansions, but Cornelius Vanderbilt’s awesome sideburns. From Elvis’s swinging hips to hip-hop’s bling.

In the sport of rowing there’s a revered, almost-mythic state when the crew operates as a unified front, the strokes of the oars on both sides matched in force and technique, the rowers in a kind of perfection, where time melts away as the shell glides across the water with majestic speed. Rowers call this state swing. And it’s our American Swing, the equal force, the synchronicity of these two sides that has enabled our prosperity economically, culturally, individually. And yet it seems in recent years the oars on the Starboard Side alone are feverishly outpacing those on the Port Side, steering us perilously off course, risking our personal and collective potential.
We’ve been taught that the squeaky wheel gets the grease, that to not just get ahead, but to matter, to exist even, we must make ourselves seen and heard. But what if this is a vast myth? And, if you pull back even further, what if our very choice of fields to work in is affected by this overall ethos?

Deborah Rivera is the founder of the Succession Group, a New York executive search firm. Her specialty is quantitative and analytical positions for global investment banks. “There aren’t enough Americans who are prepared to compete for Wall Street’s growing quantitative and technology roles that require degrees in math or engineering from top universities,” Rivera told me. “It’s really a cultural issue,” she observed. “In the U.S. people want jobs that get recognition. All of my friends who are successful, hard workers in Wall Street or doctors, attorneys, many of their children are pursuing careers in the arts or entertainment (and thus far aren’t able to support themselves).”
Even among the quantitative analysts, or “quants” as they’re called in the industry, Rivera noted, too many of them were after “the fame, the fortune with the larger project but not the grunt work to get there.”

Behind-the-scenes jobs where the worker gets little outside recognition (though is often highly respected among his peers), that require meticulousness and often have great responsibility—the three key traits of those I term “Invisibles”—such as computer coders and technical analysts are in great demand in an otherwise deflated employment environment.

While a variety of factors are leading to the demand for these types of unseen jobs, it is telling that the need is coinciding with our uptick in personal promotion. Through the Internet and its ancillary mobile apps, now more than ever, people are seeking, and have the means, to draw attention to their every thought and action. We are in the era of “microcelebrity.” As Clive Thompson wrote about the phenomenon in Wired, if you have a blog or are on Facebook or Twitter, then “odds are there are complete strangers who know about you—and maybe even talk about you.” Relatedly, the notion of the “branded self” is a growing phenomenon. As Peter Stromberg, professor of anthropology at the University of Tulsa, noted in a Psychology Today piece, branding coaches and business features today teach you to “figure out your strengths and then figure out how to market them, thereby creating a public relations image for yourself.” Stromberg asks, “What is Facebook other than a vast platform for creating brand you? For the same reason that movies get louder and brighter and more violent each decade: there’s a competition going on for people’s attention.”

What if the Invisibles’ approach to work, which runs counter to this ethos of attention-seeking, not only is beneficial, indeed, critical for us on an individual level—both in our professional and business lives—but also economically essential on a societal level? The highly influential economist and sociologist Thorstein Veblen famously derided conspicuous consumption (a phrase he coined in his 1899 book The Theory of the Leisure Class) and displays of wealth and status; instead, he valorized the class of engineers and craftsmen, people with “artisanal instinct or workmanship, a taste for gratuitous curiosity”—essentially Invisibles—“as motors of economic, social, and scientific progress.” Succinctly, what impacts on our economy and society as a whole could there be if more people embraced the values of Invisibles, rather than focusing on personal status and gaining notoriety, as is the dominant value today?

In a case of “be careful what you wish for,” it could be argued that a culture of recognition dovetails with a culture of excessive supervision. If the expectation of recognition for nearly everything we do becomes increasingly normalized, what affect does that attitude have on our relationship to privacy, in particular to employers, corporations, and governments overseeing much of what we do?

Our race for more attention has profound consequences, both overt and indirect, societal and personal. There is, however, an antidote to this ever-escalating desire for acknowledgment.

Invisibles are found in all walks of life. Like many of the most memorable characters in novels and on screen, we relate to Invisibles and at the same time see something in them that’s better than ourselves. These individuals are not an exclusive group; they are simply at the far end of a spectrum we all live within. What binds them is their approach—deriving satisfaction from the value of their work, not the volume of their praise.

This essay is adapted from the author’s new book, Invisibles: The Power of Anonymous Work in an Age of Relentless Self-Promotion (Portfolio/Penguin).

Read an interview with David Zweig