A Path to Devotion 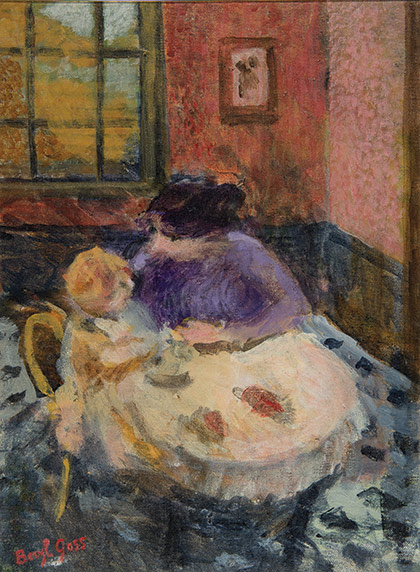 My grandmother lives in a white, two-hundred-and-fifty-year-old farmhouse in Woodstock, New York. Rumor has it that it was once used by the Grateful Dead as a practice space. The stairs creak and slant slightly. It is always cold. I have memories of being little and bathing in the claw-foot tub, the lip of which remained cool outside the water. Getting out of it, even with the small space heater, felt to me like some necessary punishment. Her house is filled with paintings, and scratchy, loosely woven mohair throws draped over pillows on benched seats, and sleeping porches with the walls of windows curtained in light fabrics that allow in the light, and old farmhouse doors with iron latches.

But the space that fascinated me most as a small child and still does to this day: her studio on the second floor. It had large and wide-paneled windows projecting out into the woodsy Hudson Valley scenery. Then there was her tall, ancient-looking easel speckled in dried paint, and the long table filled with empty jars holding brushes, European cookie tins or boxes with animals and French words on the cover, each of which opened with a small tab of ribbon to reveal tubes of oil and acrylic paint. In the corner was a rocking chair with a velvet cushion and throw over the back, and a dog bed. Part of the fantasy of this room is that, to this day, I have never seen my grandmother paint.

My parents’ house is filled with my grandmother’s paintings, and when I turned eighteen, she gave me my very own. But whenever we visited—crowding her quiet, reflective oasis with the stomping and rowdiness of my brother and myself, a dog or several, and my parents, she never painted while we were around, and I can understand that now. But it made the idea of art and the artist remain mysterious to me, something elusive that I never felt I could understand.

My grandmother grew up in Paris, leaving in 1939 for New York while on vacation in Brittany with her family when news arrived that Poland had been invaded, and panic ensued. She was sixteen. They boarded a ship, leaving their country with what they had packed for the beach vacation. Also on the vessel were the Kennedys—my grandmother liked to watch the boys play soccer on the deck of the ship—and a famous conductor, who slept on crates of champagne because the boat was so packed.

Though she never moved back to France, the painting my grandmother has done now for nearly seven decades is Impressionist in style with themes focused on Paris or the French countryside, her subjects dressed in fashions that date to her childhood in Paris.

I started writing stories when I was about six, but didn’t become serious about it until a few years later, when I had more command over the basic craft elements of handwriting and spelling. Sometimes I would orate and have my father write down what I said, but this felt cumbersome and too revealing, and plus, he was only available certain hours. In many ways, between the ages of nine and sometime in high school when I became too cool or embarrassed or ashamed about it, I was a more serious writer than I am now.

My grandmother fostered the beginning of this: she took me to the art supply store in Woodstock, and bought me pens and notebooks, and we would spend afternoons, while my brother and parents and aunts and uncles and cousins would be off tramping around some marsh losing their dogs and finding them again, sipping tea while I wrote and she read The New Yorker. I would look up and say, How do you spell…? And she would ask me, Do you think about your stories before you go to sleep? Do you dream about them? Studying a wood-carved panel from Australia that hung in her dining room depicting rows of identical aboriginal men with their hands clasped to their genitalia, I finally asked her, Why are they doing that? Why did someone make that art? I remember the twist of her smile as she tried to hide her amusement, as she answered me seriously. It was about power, she thought, and devotion, something about honoring their idea of God. I puzzled over that for many years in that dining room.

I always felt I could get my best writing done with her, surrounded by the quiet, peaceful stillness of Woodstock and encased inside her house that felt like a European villa out of another time, surrounded in the mystery of her art, and the simplicity of her paging slowly through a book on Vuillard, her finger tracing a part of the print on the page, and how she would sigh in admiration or knowingness, Yes, or say nothing at all, sometimes just ticking her tongue against her teeth, displaying something that I understood as deep reverence or devotion.

In the absence of religion, this has been my route to belief. My grandmother does not go to church, though she likes religion. She has no Bible, but she has faith. I think it’s possible that she derives her faith from the art she loves, the nature outside her window: the birds gathered on the feeder out the bay window of the dining room, the black bears that occasionally lope across her creek in the backyard, the degrees of light that shine through her studio. I think it’s possible she expresses this through painting, the way others express or devote themselves to God through prayer.

I stopped writing for many years, mainly due to illness and the loss and disorientation of self that occurred in me. During this time, I studied paintings by Klimt and Monet, kept books of their prints by my bedside, taped postcards of my favorites around my apartment in New York. I came back to myself in the dark of a ballet theatre, reassembling my spirit slowly show by show and re-instilling a belief in art, and the power of raw human energy and faith that I hadn’t realized had gone missing somewhere during the previous years, or that I had been needing so much it had become painful.

Returning to Vermont, and coming to UVM two years ago, I began to write again. I still have the feeling at times that I don’t understand art, or the purpose of a poem, or the underlying meaning of a novel, or the why of anything that is made in artistic pursuit (including the things I have made myself). Yet I feel closer to that devotional Yes my grandmother used to breathe past my ear as I sat on her lap and we peered down together at a page. In the best moments, I can even see her knobby finger brush lightly over a detail of shadow. Or light.