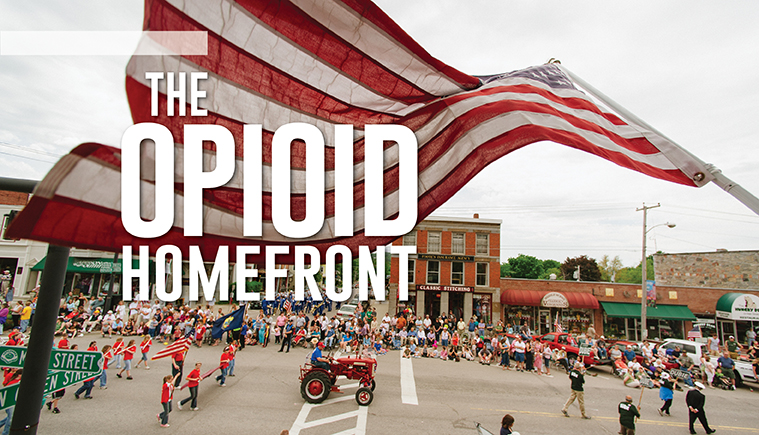 The national opioid addiction crisis has hit home with a particular ferocity in Vermont. From 2000 to 2014, Vermont saw a more than 770 percent increase in treatment for all opiates, indicating a rising tide of addiction. And it’s a deadly epidemic: Heroin-related fatalities were non-existent in the state in 2010. Five years later, thirty-four Vermonters died of a heroin overdose in a single year.

For a state that prides itself on its bucolic image—think general stores with creaky wooden floors, rolling fields of dairy cows, steam rising from the maple sugar shack—the epidemic rattled many Vermonters to their core. In 2014, then-Governor Peter Shumlin devoted almost his entire State of the State address to what he called a health crisis that required quick and decisive action. He cited statistics as well as stories from Vermont families that painted a dire picture. Vermonters were suffering and needed help.

Physicians at the front lines understood the stakes; even before the governor’s address they had been seeing the steady rise in addiction rates and knew all too well the struggles their patients had with opioids, how addiction tore families apart and ruined lives. It also killed far too many people. Faced with the ratcheting crisis and waitlists of five hundred or more at some treatment centers, physicians, public health leaders, community organizers, and law enforcement officials got to work.

Over the past five years, Vermont has emerged as a national leader in treatment for opioid use disorder. The new system—called the hub and spoke—incorporates addiction treatment into primary care in a comprehensive way not seen anywhere else in the country. A support network for community physicians administering medication assisted treatment has increased capacity at what are known as the spokes, while centers of excellence called hubs bring addiction specialists and wraparound services together to provide more intensive treatment for patients who need a higher level of support. Research on new treatments for addiction—long an area of excellence at UVM—benefits from a model that incorporates opioid use disorder as a chronic condition, fostering innovative thinking about ways to deliver that care.

UVM Clinical Assistant Professor of Family Medicine Dr. John Brooklyn ’79 had his first ‘aha’ moment related to addiction as a second-year medical student at Brown University. When a faculty member there gave a lecture about his own struggles with addiction, Brooklyn realized for the first time that the disorder doesn’t discriminate, and that “you can treat it just like anything else.”

The perspective stayed with him across years as Brooklyn completed medical school and returned to Burlington, where he earned his UVM bachelor’s in elementary education, for his residency at what is now the UVM Medical Center. Work followed at UVM’s Human Behavioral Pharmacology Lab, a pioneering center for addiction treatment research, including the use of buprenorphine as an alternative to methadone.

In 2003, Vermont introduced buprenorphine as an office-based treatment, which in theory should have expanded treatment capacity. But concerns about managing complex patients without adequate support, the lack of social and mental health services for patients, and the possibility for medication diversion meant many primary care physicians only saw a handful of patients or less. So despite Vermont boasting a high number of office-based treatment providers per capita, many still lacked care. The wait list at the Chittenden Clinic extended to two years.

Brooklyn, who was also treating patients at the Community Health Centers of Burlington, saw the struggling primary care physicians, the at-capacity clinic, and the growing number of patients who desperately needed treatment, and he proposed a plan to Vermont Department of Health officials with the executive director of the Howard Center: “One day I marched into the Department of Health with Bob Bick from the Howard Center and I said ‘Hey, you guys, I’ve got this idea.’ And I sat down and I sketched it out where we would have these centralized centers of excellence that we would call hubs, and we’d have these docs in the community we’d call spokes, and there would be a connection. We’d set up the same kind of referral network that existed with everything else in medicine.”

The idea had traction with the group, and from this initial conversation plans were set in motion for a state-wide roll-out of the Care Alliance for Opioid Addictions Initiative, also known as the hub and spoke. It required buy-in from many groups across the state—including health care providers, elected officials, and government agency leaders—as well as funding. The Vermont Blueprint for Health—the state-led initiative to improve the overall health of the population while reducing costs—designated opioid use disorder as a chronic condition, paving the way for expanding treatment.

The first hub opened in January of 2013 at the Chittenden Clinic in Burlington, and other hubs across Vermont soon followed. Spoke providers were recruited from the ranks of family medicine physicians, obstetricians, and pediatricians at all types of practices, from group and solo practices to federally qualified health centers. These doctors received training that granted them a “waiver” to prescribe buprenorphine, giving patients access to medication assisted treatment in a medical home, a place where treatment is coordinated and delivered in a way that puts the patient first. The key to making it all work, says Brooklyn, is communication and support.

“Docs in the community need to know that we have their back,” says Brooklyn. “Because if you’re going to take on prescribing for people who are fairly complex, you need to know that there’s a regional expert you can call at any time.” 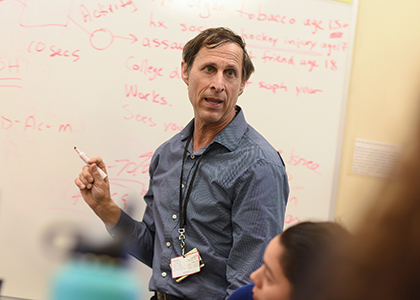 OUT OF THE GREEN MOUNTAINS, INTO THE WORLD

UVM Professor of Psychiatry Richard Rawson ’70, PhD’74, a native Vermonter who returned to the state in 2015 after a storied career in addiction treatment research at UCLA, characterizes Vermont as the leader of a paradigm shift. In December of 2017 he completed a federally funded assessment of the hub and spoke system, conducting interviews with providers and patients over the course of one year. “I was surprised and inspired by the treatment going on in primary care settings,” he says. “I think this new treatment paradigm will change the course of opioid addiction and recovery.”

In creating this new system, Vermont physicians and health policy leaders have altered public perception of addiction. Instead of shunting patients labeled as “addicts” into a category separate from other disease sufferers, they’re welcomed into an environment that supports them on the journey to recovery. Although challenges remain, the hub and spoke system represents a huge step forward in how opioid use disorder is treated and understood, and stands alone as a national model.

After gathering data from patients and providers across Vermont, Rawson says there’s no doubt the hub and spoke system is changing lives, even as the state continues to work on improvements like the integration of mental health care and additional support for family. The data tell one part of the story: Patients in both hub-and-spoke settings reported a 96 percent decrease in opioid use, including a 92 percent drop in injection drug use. Patients’ lived experiences tell the rest of the story.

“The dynamic for many of these patients is about their relationship with their doctor,” says Rawson. “Everything else is nice. Even the medicine gets rated as less important than the relationship they have with their physician. That’s different. We’ve never seen that before.”

A watershed moment came in September of 2017 when Governor Phil Scott convened a press conference to announce that the wait list for medication assisted treatment in Chittenden County had been eliminated, and that patients in all fourteen Vermont counties could receive immediate treatment for opioid addiction.

Now, the state boasts six hubs and more than 75 spokes across the state. Capacity for treatment of opioid use disorder in Vermont is higher than anywhere else in the United States, with 13.8 patients potentially treated per 1,000 people, according to a 2017 paper in the Journal of Addiction Medicine. As the first opioid treatment program in the U.S. to receive Medical Home status from the National Committee for Quality Assurance, the Chittenden Clinic leads the way for hubs. And UVM Medical Center residents in specialties including family medicine, internal medicine, obstetrics and gynecology, and psychiatry are trained to prescribe buprenorphine, so that many of the state’s newest physicians provide treatment from day one.

It’s a model worthy of export, says Brooklyn. Over the past two years he has been to California, Colorado, and even Vietnam to consult on how to set up similar systems. At a presentation at the annual meeting of the Association of American Medical Colleges in November 2017, Brooklyn was asked, “So how long are your wait times for treatment in Vermont?” When he replied that there were no wait times, an audible gasp was heard from the audience.

“We’re breaking down silos and putting a lot of emphasis on primary care homes,” he says. “Financially, it’s a viable model. A lot of people are saying ‘wow you are treating everybody, and saving money, and your overdose rate is low.’ How often in medicine do you get pretty good evidence that something is working like that?”

Adapted from an article that originally appeared in Vermont Medicine.