New Leadership at the Gut 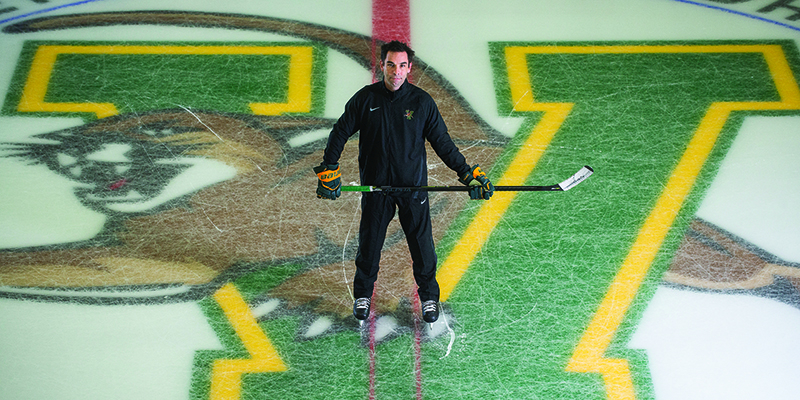 For Todd Woodcroft, nothing about his first head coaching job has been “normal.” He went through the interview process remotely and, due to COVID-19 travel restrictions, he wasn’t able to set foot on campus for four months after being introduced as the new head coach of the Catamount men’s hockey team. Now he guides his student-athletes at UVM through a fall unlike any other in the program’s storied history.

Woodcroft received his introduction to Vermont hockey and Gutterson Fieldhouse in the late eighties, coming to Burlington to watch his brother Craig, who played for Colgate, face the Catamounts. “Seeing my older brother battle here is something I will never forget,” says Woodcroft. During his time as a professional scout with the National Hockey League’s Calgary Flames, Los Angeles Kings, Minnesota Wild, and Washington Capitals, he would return to Gutterson to watch college free agents and teams’ respective draft picks. The coach recalls, “Each time, I left knowing that the Gut is truly an icon in college sports, not just college hockey.”

For Woodcroft, hockey has always been a family affair. His younger brother, Jay, also played the collegiate game, at Alabama-Huntsville. Jay is now head coach of the American Hockey League’s Bakersfield Condors, while Craig is head coach of HC Dinamo Minsk in the Kontinental Hockey League.

In 1993, looking to unite their expertise and work together, the brothers formed a hockey school. Starting small, within ten years they were in sixty cities across the world. “Those will always be the best memories I ever had with hockey,” says Woodcroft. “The lessons I learned from my brothers and all we created continue to inspire me today. When all is said and done, I want to be a part of building something.”

Woodcroft has achieved at the highest levels of the sport—winning a Stanley Cup in 2012 with the LA Kings and two IIHF World Hockey Championship gold medals. Considering what he has accomplished at the pro level with a self-proclaimed “perfect job” as an assistant coach with the NHL’s Winnipeg Jets, one could be forgiven for asking why college hockey, why UVM? For Woodcroft, it comes down to continually challenging himself and making an impact on the lives of his players. “I want to see if all I have learned is something that I will be able to teach,” Woodcroft says. “This exact age group of players is one where I believe I can have the most influence, developing them as young men and hockey players.”

Woodcroft is the fifth head coach in the UVM program’s history. His immediate predecessors Jim Cross, Mike Gilligan, and Kevin Sneddon each led the program for seventeen or more seasons. Gilligan and Sneddon helped the program reach new heights, amassing six NCAA Tournament berths and two Frozen Four appearances, in 1996 and 2009. Connecting with that tradition, Woodcroft has spoken with more than a hundred alumni of the program since being named head coach in April. “The University of Vermont is a world-class institution with a rich history,” says Woodcroft. “It is my goal to carry on the legacy of this program in a fantastic city and state with passionate fans.”

There is more to be excited about for the men’s and women’s hockey programs at UVM as the transformational renovation of Gutterson Fieldhouse began to take shape this summer. A brand new NEVCO videoboard and auxiliary scoreboard will be the first things fans notice when they’re in Gutterson Fieldhouse again, an initial glimpse of the future as the University’s Athletic Facilities Project continues to reshape Vermont Athletics.

For Coach Woodcroft, the first step to reinvigorating the men’s hockey program was meeting the student-athletes. In these unique times, that meant arranging for introductions over video and phone calls. “Connecting originally with players over video chatting was the least of my concerns at the time because I knew that soon we would meet in person, and soon we would be on the ice together,” says Woodcroft. For the new coach, watching his team adjust to the adversity and obstacles presented by COVID-19 has been a master class in understanding their desire to compete. “If you think about it, the truly elite athletes and the truly elite teams accept the discomfort. They embrace it, knowing that winning will never be comfortable.”

It’s often said that a head coach is only as good as his staff; based on that metric, Vermont men’s hockey is in good hands. The first step for Woodcroft was retaining Jeff Hill ’08 as an assistant coach. Hill began his sixth season with the team this fall. In addition, Woodcroft added two volunteer coaches with vast NHL experience. An NHL veteran of 673 games and former Boston Bruins defenseman Mark Stuart joined the staff as a volunteer assistant coach. And Mike Babcock will be joining the Catamounts as a volunteer advisor to the coaching staff. Babcock has coached more than 1,300 NHL games, winning a Stanley Cup with Detroit in 2008. In September, Woodcroft announced the final piece of his coaching staff, former associate head coach at American International College Stephen Wiedler.

On September 9, Woodcroft and staff were able to take the ice with their team for the first time. Practicing pandemic safety pre-cautions, the team practiced in three separate “pods” of nine student-athletes at a time. Woodcroft sees a silver lining in the protocols: “This allows the players to learn how the coaching staff sees the game, how we want to teach it, and what our language is,” he says. “We can connect much better with the players as individuals in small groups.” As the team continues to work towards a safe return to competition this fall or winter, Woodcroft hopes this focused time with his new team will be the launching pad for a new era of Vermont Hockey.