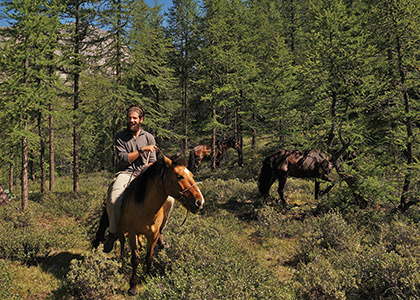 On the eighth day, Simon McIntosh ‘17 got off his horse and started walking. He was exploring a roadless mountain pass in the northernmost corner of Mongolia, near the border of Russia. To his east, Lake Hovsgol stretched for more than eighty miles. “Some people call it the Blue Pearl,” he says. “It’s stunning around there—where the steppe grasslands and taiga forests meet the Siberian mountains.” In that region, nomadic Tsaatan people herd reindeer, and endangered ibex and Argali sheep roam. A few trucks and motorcycles meander through the grasses and mud. To cross the mountains, and descend into the Darkhad Valley, there is no improved road, only rough tracks.

Helping to answer that question became McIntosh’s senior thesis—and took him to Mongolia for the summer of 2016. It was his second trip there to make maps in partnership with local park rangers and the Mongol Ecology Center. An environmental studies major in UVM’s College of Agriculture and Life Sciences—with a minor in geospatial technologies—McIntosh spent weeks trekking over five mountain passes with a Mongolian partner, and a pocketful of GPS equipment.

“Write a thesis or do an independent study. Find a project that is yours,” McIntosh suggests to incoming students. “You should look at college as something you do, rather than something that’s done to you.”

Next story in The Green