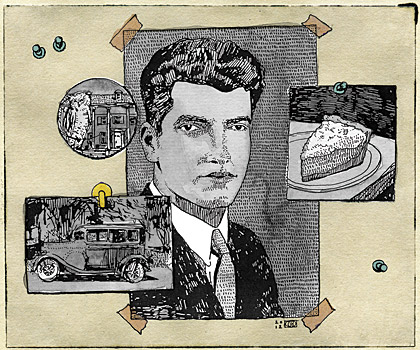 Fraser Drew ’33, who celebrated his ninety-ninth birthday at his home in Williamsville, New York, this summer, is among the university’s oldest alumni. But Drew, to borrow a nugget from Abe Lincoln, is the sort of man for whom the life in his years is just as notable as the years in his life. At ninety-nine, he’s a delight to converse with and writes a thoughtful letter in a careful hand.

His career included decades as a beloved and influential professor of English at Buffalo State University of New York. He is a hearty traveler who has visited every county in Ireland; a literary scholar and unabashed fan of authors whose one-on-one meetings included a three-hour visit with Ernest Hemingway in Cuba; an ardent literary collector who has donated rare author-signed volumes and letters to UVM Special Collections; and a graceful writer who, in his later years, turned to typing out memories of his past, including his formative years at UVM. (In a letter to a friend, Drew’s humility and precision with language show as he corrects himself for referring to these works as a memoir—“This is a pretentious word and I’ll use recollection instead.”) Memoirs or recollections, they are keenly observed and recalled moments in time, a window into a bygone era at the University of Vermont.

An hour or two at Rand’s, five minutes from the Owl House, was the right interval between Latin and the rest of my work.

Rand’s was a typical college hangout of the early 1930’s, presided over by busy, unsmiling Mrs. Rand, who offered very good food in pleasant surroundings at fair prices. The back booth was the regular territory of Lecta Schaefer, a tall girl from the Hudson Valley with a mane of red gold hair and literary gifts and interests. Lex had several friends at the Owl House who often joined her and the equally striking dark-haired poet Dorothy Kennedy. I was one friend and my junior-year roommate Stan Carter, a farm boy from East Corinth with the manner of an urban sophisticate, was another. Freshman Owls Art Mayville and Ray Greemore were often there and an occasional heathen like the Irish brothers Derven from downstate. The back booth was always thick with smoke, no deterrent for Owls whose fraternity had been founded as a rebellious smoking society and had once been known as Lorillard Institute.

Here we talked of FDR and the Depression, of campus politics, games and dances, of the newest poems of Frost, MacLeish, Robinson, and Edna St. Vincent Millay. We drank much coffee and sometimes ordered a piece of Mrs. Rand’s superb homemade pie—apple, mince, berry, or her signature coconut custard…

THE CYNIC AND OTHER MATTERS

Often my evenings included a couple of hours at the Vermont Cynic office in the north end of the Old Mill, the venerable building where all my classes met except military science, gym, and zoology. As a freshman I had been a reporter for the Cynic, the university semi-weekly newspaper, then film columnist and news editor, and eventually editor-in-chief… The little office was noisy with typewriters, telephone, and the constant traffic of reporters.

When I was editor-in-chief, the Cynic provided a telephone in my room at the Owl House, though it also served my social life and that of my senior year roommate, Art Mayville. Like telephones, student cars were rare in the early thirties. From the parking space behind the house I remember only the roadster owned by Owl hockey star Bob Hendrick in which he looks like a hangover from the Roaring Twenties in his big coonskin coat. Art often brought his mother’s big blue Oldsmobile in from Milton for the weekend, and double dates in this elegant car were mine in unspoken brotherly exchange for help on Art’s French comps and the availability of Burlington 3273, the only phone number I have remembered for seventy years.

Most of us cannot remember a time when we did not know the melody and some of the words of “Star Dust,” and I am just old enough at ninety-seven to recall its earliest days. I was a freshman at the University of Vermont when the music of Hoagy Carmichael and the lyrics of Mitchell Parish began to float through the dance halls of Burlington and the fraternity houses of Pearl Street and College Street. Somehow “Star Dust” ensorcelled us and its enchantment has endured through a century’s decades and then beyond.

I first heard “Star Dust” at the annual dinner dance of Lambda Iota, the society whose brothers had taken me in hand and patiently taught me lessons not available in my Latin, French, and Greek textbooks. My date for the formal was Faire Divoll, a glamorous junior recruited by my Lambda Iota brothers who years later remembered the occasion as the first time she had heard “Star Dust.” And I heard it at every dance of my years at Vermont, Syracuse, and Duke, and my teaching years at Green Mountain and Buffalo State until the time of the Beatles, when “Star Dust” moved to private collections of records and the reminiscent programs of television…

WITH HEMINGWAY IN HAVANA

He asked if I had any books in my briefcase for him to sign, and I admitted having picked up what I could find on a hurried tour of the French Quarter bookshops. Asking for information about each recipient, he signed The Old Man and the Sea for my father, To Have and Have Not for Buffalo State College colleague Conrad J. Schuck…

After he had signed the books, he asked why I had become a teacher. “You don’t look like a teacher,” he said. “You have the face of a doctor.”

I remembered that his father had been a doctor and that the young American’s Italian friend Rinaldi in A Farewell to Arms was a surgeon.
When he asked about my collection and learned that I had all his first editions except The Spanish Earth, Hemingway found his own copy of the first issue, marked “author’s copy” in his hand, and gave it to me nicely inscribed, further stuffing my briefcase with French and Italian editions of A Farewell to Arms, For Whom the Bell Tolls, and The Old Man and the Sea, signing them all with comments about the cover or illustrations about my trip.

I would gladly have spent all day in the library, but we went on to see other rooms. In the dining room I recognized Miro’s “The Farm,” the only picture I could have identified for sure among the Massons, the Klees and other moderns. It turned out to be Hemingway’s favorite, purchased in Paris in 1925 when he and his wife could not afford such extravagances. He also showed me the room where he worked every morning standing at a typewriter that rested on a bookcase. The room also contained a bed, other bookcases and a table strewn with books, papers, and unopened letters.

Clutching my bulging bookcase, I thanked my host and began my exit.

“I hope that you aren’t too badly disappointed after coming so far and taking so much trouble,” he said. “Writers are always a disappointment when you meet them. All the good in them goes into their books, and they are dull themselves.”

I assured him that this time he was wrong and the visit had been all I had hoped and more.