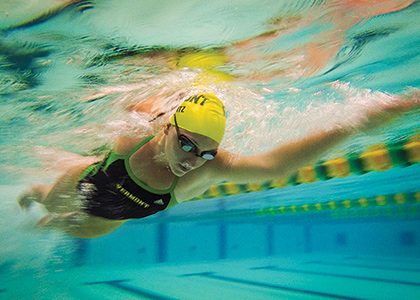 Swimming can be a decidedly individual, even isolated, sport—fitness built lap upon lap chasing down the black stripe at the bottom of the pool. Given that reality, it’s not hard to understand why an accomplished swimmer like Catamount senior Sarah Mantz finds her greatest joy in the sport through the camaraderie of the relays. She says they are her favorite events, and the collective energy often drives her to personal records.

And of all the relays that freestyle sprinter Mantz has raced at UVM, she’s quick to single out the highlight. At last season’s America East Championship meet, UVM went head to head with perennial sprint rival University of New Hampshire in the 200 freestyle relay. In addition to having a first-ever conference championship in that particular event on the line, the Cats were hoping for an appropriate send-off for senior standout Christa Weaver ’16.

“It is such an honor and I’m so proud to be on those teams,” Mantz says. “You’re up on the block and you’re pumping each other up and you’re jumping around and screaming. There is something special about it.”

The UVM foursome (Courtney Gray, Kira Hancock, Weaver, and Mantz) knew they were strong contenders going into the race, and they delivered in a big way. “Each of us was just banging out awesome times,” Mantz recalls, smacking her fist into her palm. “Every single person was going off. We were getting more and more excited as each leg went past. When we touched the wall and we won, it was just the greatest feeling.”

Though swimming starts most of her days (up at 5:30 a.m. for 6 o’clock workouts in the pool or weight room) and is a key focus of her time and energy, the opportunity to compete on a Division I varsity team isn’t the only thing that brought Mantz to UVM. She’s a top student in the Grossman School of Business with a concentration in marketing, also juggling an internship with the Lake Champlain Regional Chamber of Commerce. She has earned multiple appearances on the America East Commissioner’s Honor Roll by notching a GPA above 3.5.

“When I started the process of looking for colleges, academics was first, but I also knew that I wanted to swim. My goal was to find a place that I loved being, where I would find a team that I loved and would be able to contribute,” Mantz, a native of West Hartford, Connecticut, says. She also remembers being smitten with Burlington on her visit, driving home with her dad and feeling like they had found that place. “I looked at maybe fifteen schools, but UVM turned out to be the only school where I applied. I have never looked back, and I have never been happier in my life.”

Reflecting on her development as a UVM swimmer, Mantz believes that her greatest improvements have come in her mental approach to competition. Arriving at UVM, she was frank with coach Gerry Cournoyer that she felt she “had to get over her own head.” In other words, find the confidence to deliver the performance on race day that her training had prepared her for.

“No one can really force you to believe in yourself,” Mantz says, but Cournoyer, assistant coach Jennifer Fenton-Cournoyer, and teammates were a continual source of reassurance. Cournoyer remembers being impressed by Mantz when she attended a summer swim camp at UVM as a high school student. “It’s been great to watch her mature into a strong woman, empowered in the pool. Her work ethic resonates and elevates people all around her,” the coach says.

Mantz also hands a bit of credit for her success to a less likely source—rapper Dawin, whose song “Dessert” was her psych-up song of choice. To stay loose, she moves. “I go out on the pool deck with my headphones on and just dance my butt off. That helped me have the best season of my life last year. It might freak the competition out a little,” she laughs. “But that’s not really my intent.”

With one season to go in her UVM career, Mantz is a bit wistful as she talks about confronting a year of “lasts”—last first day of practice, last class of new teammates to welcome, and, finally, that last meet. Though she’ll put her college career behind her, Mantz says getting in the pool will always be a part of her life: “I’ll be that ninety-year-old woman swimming laps.”

Dawn Cressman ’03, a two-time team captain, played an integral role on two America East Regular Season Championship teams during her career as a member of the Vermont women’s basketball team.

George Deane ’01 G’03, an America East All-Conference performer in both cross country and track, was one of the top runners in New England during his career and is considered one of the best middle distance runners in UVM’s track and field history.

Michael Gabel ’05 was one of the top goalkeepers to play in the Vermont men’s lacrosse program, ranking in the top-three in every career statistical category. An America East All-Conference First Team selection in 2003, he was a two-time team defensive MVP during his career.

Jamie Kingsbury ’06, a two-time NCAA Champion and seven-time All-American, is considered one of the most dominating alpine skiers in UVM skiing’s rich history. Kingsbury won the giant slalom at the NCAA Championships as a freshman in 2003 and again as a junior in 2005.

Michele Palmer ’04, one of the top cross country runners in the region over her career, was a nine-time America East Academic Honor Roll selection, a two-time NCAA qualifier in cross country, and a two-time conference champion in track and field.