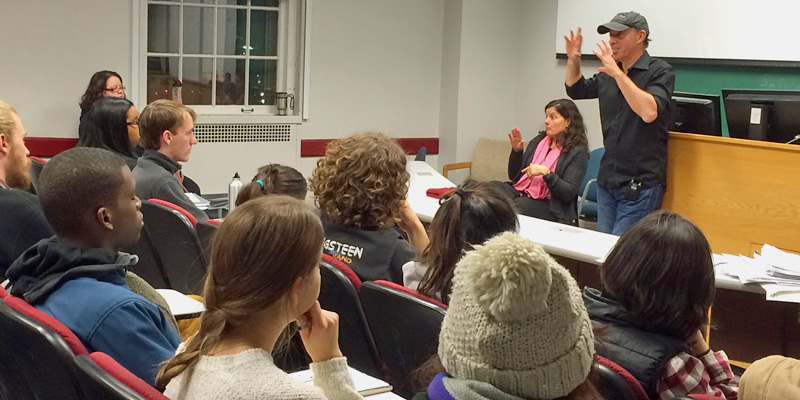 Addressing students, Jon Kilik '78 told them about the bonds he's formed with 'Hunger Games' cast and crew. "It's a shared communal experience that I love. It's like being locked in a dorm room together for four years."

This week, award-winning indie producer and alumnus Jon Kilik brought his new film, a movie eight years in the making, to UVM for its Vermont debut. Students were treated to two Tuesday night screenings of Foxcatcher — a film that’s already generating Oscar buzz for the performances delivered by Channing Tatum, Mark Ruffalo, and especially Steve Carell, who steps outside his comedic wheelhouse for the role.

Exploring ambition, obsession, jealousy and loneliness, Foxcatcher tells the true story of Mark and Dave Schultz (Tatum and Ruffalo), Olympic gold medal wrestlers, whose lives were changed when millionaire wrestling enthusiast John du Pont (Carell), a troubled member of the elite family, sponsored Mark’s drive to remain best in the world. The complicated relationships among the three ended in tragedy in 1996, when du Pont shot and killed Dave on the du Pont family estate, Foxcatcher Farm.

The movie, Kilik told students in a Q&A after the film, is really about an “American tragedy, a broken American dream.” It tackles issues of class, wealth and power, but ultimately tells a complex story of humanity, a common thread for all of the movies Kilik has produced throughout his career, titles that include Do the Right Thing, Malcolm X, Dead Man Walking, Babel, Biutiful, and The Hunger Games films, among others. “We're not here to preach,” Kilik told students. “Art doesn't do that. But it does hold up a mirror to us and to society.”

Following the 6 p.m. screening, Kilik asked for not only questions from students, but also comments and their reactions to the film, which has only been screened for select audiences to date. One student commented on the physicality of the movie, about how so much is communicated not through dialogue but through touch. Adding on to that theme, another student talked about the film’s sound design and the choices made about when to allow the audience to hear a conversation and when to conceal the words exchanged.

Kilik, noting that those reactions were among the first shared after the film’s Cannes debut, described the movie as “a fragile film, told with a lot of silence.” That’s one of the reasons so much time was taken when creating it: the filmmakers wanted to get the editing right.

Another reason for its eight-year production time: unlike The Hunger Games series, which is based on the books by Suzanne Collins, no book or screenplay yet existed when Kilik and director Bennett Miller (Capote, Moneyball) began creating Foxcatcher. They teamed up with writers E. Max Frye and Dan Futterman to tell the story from scratch.

When it came time for questions, the always popular “What does a producer do anyway?” question was posed.

“Making a movie isn't like playing a song or making a painting,” Kilik said. “It's a pretty big endeavor. You don't do it alone if you're a director or a writer.” Among the many logistics that are within the purview of the producer, Kilik says that early in the process his job is to be “the director’s first audience, to tell him he’s not crazy,” and to make sure that the integrity of those ideas are protected throughout the film’s creation.

This visit was one of many that Kilik, a member of the Class of 1978, has made to his alma mater to screen and talk about his work with students. He credits visits from filmmakers to his UVM classes for sparking an interest in the profession. "If I could be that to one student, that's a big deal to me," he says.

Before the evening screenings, Kilik did just that: he spent the day visiting classes, including Professor Hilary Neroni’s “Development of Motion Pictures” class, where he took students through his journey, from shooting Super 8 films on North Street in Burlington, to working with Spike Lee, to the unexpected success of The Hunger Games (Kilik signed on to the project before the books where popular). “It all started here,” Kilik said from the front of the Waterman classroom, wearing his UVM cap. “And it’s still the same process: trying to create something out of nothing.”

Read about Kilik's last visit to campus in 2012, when he held a benefit screening of Hunger Games
Read a Vermont Quarterly interview with Kilik and film profs Hilary Neroni and Frank Manchel
Visit UVM's Film and Television Studies website
Watch the 'Foxcatcher' trailer.