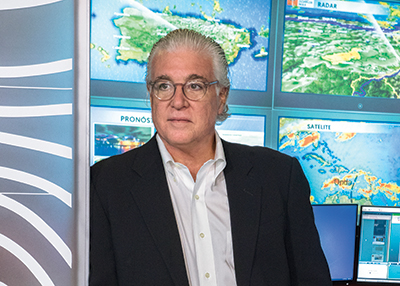 Part of that devastation: a thousand-foot television tower, which had stood atop Puerto Rico’s tallest mountain for sixty years, was pulverized by winds greater than 200 miles per hour. Now, it’s up to Jonathan Garcia ’81, a senior vice president at WAPA-TV, and his staff to rebuild a communications system, and a way of life.

Outages, of course, mean no Internet, and no television. “It affected our business very much,” says Garcia, who’s been with San Juan-based WAPA for nearly twenty years. “We’ve never seen anything like this.” With their infrastructure devastated, WAPA is using Telemundo’s broadcasting tower to stay on the air as they rebuild.

Unlike most mainland local networks, WAPA is an independent station. “We produce everything on our own. It’s like being in mini-Hollywood,” Garcia says. And their approach has worked; WAPA was Puerto Rico’s most-played station for the last nine years. “Instead of focusing on rating points, I try to find new solutions,” Garcia explains, like product integrations and new programming. Over the years, his credits include helping to start “MTV Puerto Rico,” and producing “Idol Puerto Rico.”

Many islanders, deprived of power and cell data, have changed the way they get their news, turning back to newspapers and radio. Garcia, whose job includes managing the station’s sales and marketing, saw advertisers simultaneously shift their dollars to these traditional mediums, bucking recent trends; the alum estimates it will take the station six months to normalize programming, ratings, and advertising billings.

Garcia spent his early years in Philadelphia and New Jersey, before the family moved to the island when he was eleven. He attended a small, private American high school in Puerto Rico. “I had total island fever,” laughs Garcia. “Puerto Rico is a hundred miles long, thirty-five miles wide. I said, ‘What’s the farthest place I can go, where I’ll have no family, and no other person here would apply?’” The answer: UVM.

When he arrived on campus, it was his first visit ever to Vermont and he had no winter clothes. He was one of fewer than a dozen students of color. But he quickly found his niches; one year, he lived in the Pantomime Suite in Living/Learning. “I was an annoying mime on campus, juggling, unicycling, clowning,” he confesses.

Fond memories of student life include an epic run of concerts at Patrick Gym: Springsteen to Van Morrison to Bob Marley. And there was a deep-Burlington-late-seventies moment when he and friends took a study break visit to this little ice cream shop on the corner of College and St. Paul. A guy named Ben scooped the granola chunk; his friend Jerry played piano in the corner.

At UVM, Garcia found a way to combine this passion for music with his business and engineering studies in broadcasting. He started WRUV’s radio operations suite, later becoming the student-run station’s public relations director. He even created the logo still used today. “My involvement with ’RUV launched me into radio. It helped me a lot.”

Today, he and his wife live outside of San Juan, and actively maintain ties to Vermont, returning to their house in Stowe throughout the year.

Rebuilding after Maria presents a challenge unlike any other, but Garcia is up for it. A thirty-year television-industry veteran, he’s faced reinvention before, especially in the face of the digital revolution.

“I live for creativity, and I always try to do things differently,” Garcia says.  “I get up with the same energy for my job every day.” The historic storm, and the devastation it left behind, hasn’t changed that: “Puerto Rico will never be the same, but we’re going to come back strong.”