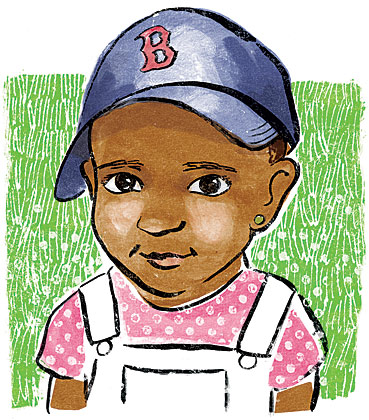 My two-year-old twin daughters, Giulia and Isabella, never cease to amaze me with their instinct for the best things in life. “Annie’s Mac and Cheese” is pretty good, but not as good as the tortellini with spring peas, pancetta, truffle oil, and pecorino cheese I made for my wife and myself the other night. The girls know the difference; hence, uneaten Annie’s now languishes in the back of the refrigerator. Raffi is pretty catchy, but he doesn’t hold a candle to the old jazz masters, and so the girls now are singing Cab Calloway and Fats Waller tunes. One day last month I had a baseball game on the television in the background as we were playing Ring Around the Rosie.  All of a sudden, Isabella blurts out: “I don’t like the Yankees, Daddy, I like the Red Sox.”

You may call Isabella a jump-on the bandwagon frontrunner; I call her a chip off the old block. Things were different, of course, when I was a kid growing up in a small town in western Massachusetts in the 1960s and ’70s, when to be a Red Sox fan was to accept failure—not routine failure, but spectacular, gut-wrenching, heart-breaking failure. But there was something about those perennial tragic endings to the Red Sox season that engendered deeper passion and loyalty. The Red Sox were family, and we suffered together, as a family.

Only later did I come to know that some suffered much more than others, because they never could be sure they really were, in fact, fully accepted members of the family. I’d known the Red Sox had been the last team in the major leagues to field an African American player, but until reading Howard Bryant’s Shut Out: A Story of Race and Baseball in Boston (a book I’ve been using in one of my classes), I didn’t know that as late as the year of my birth the Red Sox didn’t employ a single black person in their entire organization, not even on the janitorial staff or grounds crew. I didn’t know that many black baseball fans in Boston felt unwelcome—or worse, unsafe—at Fenway Park, and many in fact rooted against the Red Sox.

I didn’t know these things because it was convenient for me not to know them: it was my privilege—the privilege of my whiteness—not to have to complicate my nostalgia. It was my privilege to protect the sentimental memory of my childhood trips to Fenway Park to see my heroes without thinking about black kids my age, living in Boston neighborhoods within earshot of the park, missing out on this experience.

These are my thoughts as I go on-line to shop for toddler-sized Red Sox caps and shirts for my daughters, Isabella and Giulia. My daughters are black, born in Ethiopia and adopted there sixteen months ago by my African-American wife and me. Would I have the same thoughts if my children were white? Is it only the dark skin of my own children, I wonder, that makes me think about kids of color in Boston and throughout New England, hoping they feel as much a part of what’s now called “Red Sox Nation” as their white schoolmates?

There’s good reason to be hopeful. After all, the face of today’s “Red Sox Nation” is David Ortiz, an irrepressibly gregarious Dominican immigrant who goes by the nickname “Big Papi.”  (I guess I’ll have to settle for “Little Papi.”) The current Red Sox owners have begun to face up to the team’s racist history and have set about to create a more diverse and inclusive organizational culture—not to be politically correct, but to win championships, to be the best they can be.

The best that we can be. Diversity makes us the best that we can be. One of the challenges of the effort to diversify American workplaces, schools, and other social institutions is the fear that merit—quality—may somehow be compromised. But diversity and greatness are not only compatible; they are, as the Red Sox teach us, dependent on each other.

I’m proud to be a professor at UVM and a citizen of Vermont because we have not let the circumstance of our demographics stand in the way of our commitment to diversity and inclusion, which is part and parcel of our commitment to excellence. We know this commitment is not sufficient in and of itself. We know that to make diversity more than a slogan, it takes an
understanding of the world as a complicated place in which we must be brave enough to face our fears and move forward with compassion and curiosity. Most important, we must always question whether everyone in our community feels as much a part of the “we” as we ourselves do.

Winning isn’t everything, alas, and my heart is still with those tragic Red Sox teams of yore as much as with the recent World Series champions. That’s the way it is with families, real or imagined: the suffering and the joy are of a piece, nothing is forgotten, and the experience is too unpredictable to lend itself to a clean scorecard tally. We need each other, which means we need to know each other’s pain and each other’s struggle. This takes commitment, compassion, and patience.

Commitment, compassion, patience. I’ll try to bear this in mind should the day arrive when my daughter Giulia comes to me and says, “Daddy, I’m a Yankee fan.”

John Gennari is associate professor of English and director of ALANA U.S. Ethnic Studies. He originally wrote this essay for his closing reflection at the 2008 commencement.

Originally published in the Fall 2008 issue.