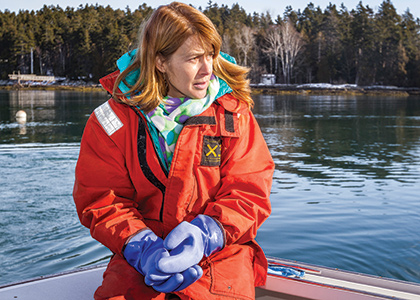 Even before her years at UVM, Ivy Frignoca fell in love with Lake Champlain on family visits to Vermont. Home to some of the oldest fossilized coral in the world, witness to a revolution, the long northern lake’s intrigues run deep.

Frignoca would begin her undergraduate studies at UVM as a child psychology major, but environmental studies pulled at her. Until she was exposed to the option at UVM, she hadn’t realized she could make a career out of her passion for water. In her sophomore year, she switched majors, self-designing a major in environmental studies. It was a decision that shaped the rest of her life.

“The goal of my major,” she says, “was to be the conduit or the voice between all the technical data and information that scientists had and the public, so that through information and education, I could help protect the lake.”

After graduation, Frignoca would work as a park naturalist and then chief of conservation education for the State of Vermont. Nearing age thirty, she took a new direction to strengthen and broaden her skills as an environmental advocate—she enrolled at the University of Maine Law School.

After graduation she didn’t dive right back into the natural resources field, though. Instead she took the advice of lawyers who did untraditional things with their law degrees: she practiced law as a trial lawyer first. “It was really phenomenal advice,” she says, because it taught her the skills of learning how to cope with very big conflicts and emotional situations and people; making sense of lots and lots of information; and finding creative solutions. All skills she needed to have to be the sort of water advocate she wanted to be.

Over nearly two decades, she honed her skills as a trial lawyer, professionally returning to the natural resources field when she joined the Conservation Law Foundation in 2012 as a staff attorney.

Today, Frignoca is based in South Portland, Maine, and is the Friends of Casco Bay’s newly-named Baykeeper, a role that meshes perfectly with the goal she set out with her UVM major years ago. As the nonprofit’s Baykeeper, she advocates on behalf of Casco Bay, working to protect and restore its water quality, much as she did for Lake Champlain during her years in Vermont.

As Baykeeper, she works with fishermen, businesses, government agencies, citizens, and other stakeholders to identify threats or potential threats to Casco Bay and to come up with and implement scientifically sound solutions that are also practical and effective.

She is even working on projects that mirror some of the work she did on Lake Champlain. In her current role, one of the issues she is focused on is nitrogen loading in Casco Bay, which parallels her work with phosphorous loading in Lake Champlain.

Unlike those early days, however, today Frignoca is in a position to shape the policies that impact the bodies of water she loves so much. “It’s such a wonderful full circle because everything that I studied or the things I worked on combined with all the policy work and legal review—it’s all coming together in this position,” she says.