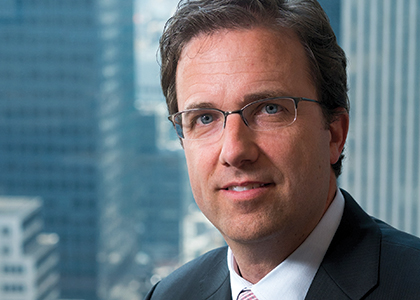 THE SPARK     Howard Averill ’85, chief financial officer of Time Inc., fully realized his love of numbers during his semester in an accounting class with Professor Peter Battelle. But, years later, he would make another important realization—that financial numbers felt hollow unless they were connected to something meaningful. A self-professed newshound, Averill experienced this firsthand at NBC Universal in chief financial officer roles at MSNBC, NBC News, and NBC Universal Television, where he was part of the news planning process while handling the financial aspects of producing “NBC News,” “The Today Show,” “Nightly News,” “Dateline,” and “Meet the Press.” “It’s not just widgets and numbers, it’s how you plan to cover one of the most expensive news events in history ten thousand miles away in Iraq, or 9/11, or the 2000 presidential election,” says Averill. “CFO roles in companies like this put you in the middle of everything.”

THE LADDER     An early job with Pepsi helped lay the groundwork for future success, Averill says. “I learned about all these systems for how to plan and little quirky stuff you don’t really think about—but turns out matters. A lot of people in my field who are way smarter than me never learned about operations or how things work.” Averill, who would move on to ITT/Sheraton before advancing to NBC Universal and Time, admits he’s sometimes questioned whether he was ready for the next step. “I remember thinking after the MSNBC job, ‘I’ve finally reached a level beyond what I can handle.’ I’d always call my oldest brother Jim ’80, and he’d say, ‘What are you nuts? You’ve got to go for that.’ Fortunately, they’ve all worked out so far.”

DAY TO DAY     Averill catches the 5:30 morning train from his home in Westchester County to his office on the thirty-fourth floor of the Time-Life Building in Rockefeller Center, where he oversees the finances of the $4 billion international publishing company and its 120 magazines and fifty websites. Budgeting and forecasting, financial reports, audits, and taxes take up much of his time, but no day is ever the same. Averill is currently focused on helping Time continue its development in the digital age. “It’s a little tough lately because we’re in an industry that’s going through some major changes, but we’re figuring it out, which is what makes it so exciting,” he says. “Trying to transform an industry is really tricky, but I love being part of it.”

COLLEGE YEARS    Averill is a Burlington native who grew up just down the hill from Redstone, one of five boys in his family to graduate from UVM. He briefly considered being a doctor or a dentist, like his brothers David ’80 and Paul ’83 who went to work for their father, Charlie, at his practice on Pearl Street. But that epiphany in Peter Battelle’s class sharpened his focus on economics and accounting. “I loved UVM,” says Averill, who met his wife, Sharon, in Bailey-Howe Library. “My friends said I spent too much time in the library, but I loved what I was doing and studying that stuff. If you love it, you get better at it. And that has been the case throughout my career.”