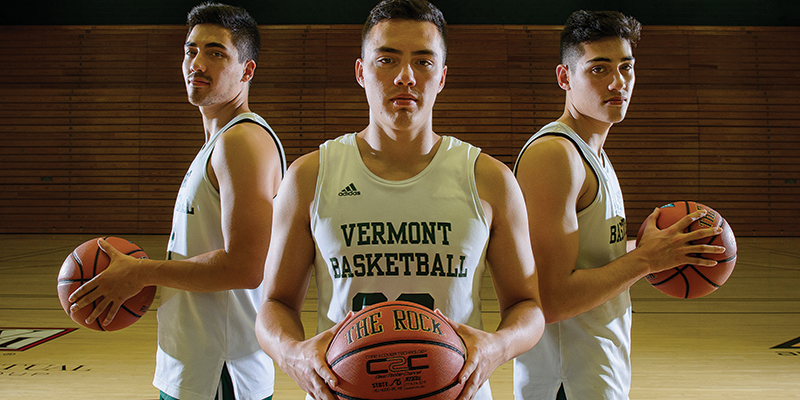 Being brothers and being teammates are similar, but not the same. When Robin Duncan is asked to evaluate the basketball strengths and weaknesses of his older brother Everett, he says quietly, “Everett can shoot. He’s a glue guy, a good leader. His weakness? He likes to yell at me a lot.”

Sitting with Robin and brother Ernie in Patrick Gym after a practice session, Everett is quick to defend himself: “I used to yell at him back in the day! I won’t lie. But I don’t yell at him now. I’ve changed.”

Robin jumps in, “I try not to talk back, but sometimes I mess up, and I’ll talk back to him when I’m wrong. I’m used to arguing with him as his brother, so I’m trying to learn how to not argue with him as a teammate.”

Ernie, a redshirt senior, is the oldest of the three Duncan brothers taking the court for the Catamounts this season. (Everett is a redshirt junior; Robin, a freshman.) Seizing oldest brother privilege, Ernie sums it up: “I’d say we’re definitely harder on each other than we are on our other teammates. We know what we each can take.”

Pushing each other to reach their full potential as basketball players runs deep in the DNA of the Duncans, who grew up in Evansville, Indiana. Their father, Stan, was a six-foot-six Hoosier State kid who, looking back as an adult, felt he’d wasted his athletic talent due to a lack of focus and guidance from his parents.

When, at age nine, Ernie began to show skills and love for the game deeply woven into Indiana’s state culture, Stan and his wife, Melinda Duncan, were determined to help their son and his siblings make the most of it. While Melinda continued with her job at a retirement home, Stan retired from construction work to homeschool the kids for several years and coach them in basketball.

They practiced seven days a week at home, at the local YMCA, and the Evansville Basketball Academy. “Basketball is a touch sport,” Stan says. “You have to work on it all the time.” The Duncan brothers’ days began with solid breakfasts, eggs and sausage, and watching tapes of NBA legend Steve Nash as their dad pointed out nuances in his game. “Preaching the gospel of basketball,” Stan says.

By age thirteen, Ernie could take his father in one-on-one. “He was just too fast,” Stan says. Everett and Robin developed quickly, too. (Watch video of fifth-grade Robin’s ball-handling skills: go.uvm.edu/robin.) The Duncans would become a force for Evansville Harrison High School, leaving their mark on the school’s record book.

Stan and Melinda Duncan also saw a promising path to college via athletic scholarships as their kids began to excel as players. In addition to the UVM teammates, their children include Mary, Stanley (who plays basketball for Anderson University in Indiana), and Brandon.

When Vermont head coach John Becker and assistant Kyle Cieplicki ’08 came calling on Ernie before his senior year in high school, he was at first unsure about this school up in New England, a thousand miles from home—“Vermont? I’m not going to Vermont!” But Cieplicki made his case, building a relationship and selling the virtues of strong academics, a leading mid-major program, and the opportunity for playing time from the start.

Being from a large, close family, Ernie says he was naturally drawn to the family atmosphere of Coach Becker’s program. A visit to UVM and Burlington sealed it. “I pretty much fell in love,” Ernie says. “I knew it wouldn’t get better than this.” And that Duncan-Catamount bond continued to grow as Everett and Robin went through their own recruitments. It was an easy choice, they say.

Another key draw for the Duncans has been the Catamounts’ place as perennial contenders, often favorites, to earn America East’s slot in the NCAA Tournament. Ernie and Everett had that college hoops thrill-of-a-lifetime in March 2017 when the Cats traveled to Milwaukee as a No. 13 seed to take on No. 4 Purdue, putting up a strong upset bid before falling 70-80.

Considering the season ahead, Ernie Duncan says getting back to the tournament is the ultimate goal. In his mind, the entire success or failure of the season rests on that measure. A young Catamount team includes the sibling trio, just the fifth time in NCAA history that three brothers have played for a Division I basketball program. A pre-season list of the best shooters in college basketball included Ernie and Everett among the nation's elite.

The bad fortune of a freshman-year injury and redshirt season means that Ernie is in his fifth year and has the good fortune to play organized basketball with both Robin and Everett for the first time.

“I’m getting used to it now, but at first it was unreal, playing with them,” Robin says. “Because I’ve always looked up to them growing up, since I was real little.”

They laugh, then are quickly off and running with trash talk about the assist record at Evansville Harrison High School—once Ernie’s, then Everett’s, now Robin’s.

Martin St. Louis ’97 joins the National Hockey League’s Hall of Fame this fall. A star for the Catamount team that skated to the Frozen Four in 1996, St. Louis had a stellar seventeen-year professional career that included six All-Star Game appearances, multiple league honors, and the 2004 Stanley Cup and MVP while playing for the Tampa Bay Lightning.

Are you old school? Do you miss Charlie and Kitty Catamount? UVM Athletics is there for you with a new vintage line of clothing and other products celebrating mascots and logos past. Check out the gear online at uvmbookstore.uvm.edu or shop during games at Patrick or Gutterson.