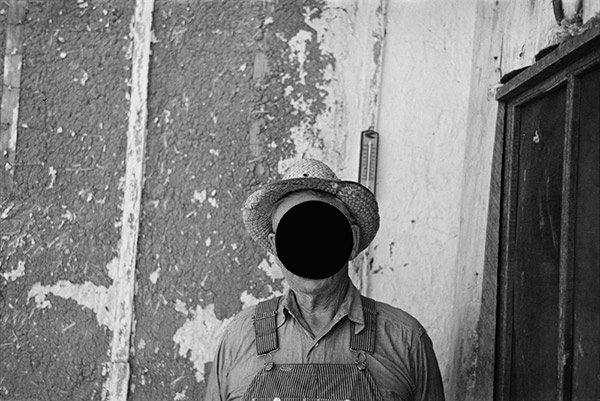 In the eyes of Roy Stryker, a government bureaucrat during Roosevelt’s New Deal, they are photographs that should never have been printed. Bill McDowell, UVM professor in art and art history, thinks otherwise. In the mid- to late-1930s, Stryker (or, more likely, a minion on his staff) used a simple hole punch to invalidate a frame on a strip of film negatives—or, in the parlance, “kill” it. Eighty-some years later that hole, the black circle it creates on a print, is precisely what draws McDowell to the images by creating a starkly visual conduit between eras of American history and art.

Stryker, an “autocratic” type according to McDowell, headed the photography division in the Farm Security Administration. His unit was long on talent with the likes of Walker Evans and Dorothea Lange shooting black-and-white photographs that documented administration programs and, for the most part, agricultural landscapes. (Lange’s negatives were never punched, McDowell notes. She developed her own film rather than entrusting it to the often-sketchy handling of government photo labs.)

The languishing hole-punched negatives first came to the professor/photographer’s attention in 2003. Michael Lesy’s book Long Time Coming featured previously unpublished FSA photos. Though the book itself did not publish any of the punched negatives, a magazine review of it was illustrated with one. “It was a street scene with this big black hole.  I saw that and it hit me really hard.  I thought, ‘Damn, that’s a photograph I wish I had made,’” McDowell recalls.

Other projects took priority, years passed until 2009 when McDowell began to dig into the 70,000 FSA images, many of them killed, that had been digitized by the Library of Congress. “I found that there were so many of them that were intriguing images because they were simultaneously representational and abstract,” McDowell says. “This black hole created an abstraction and a really palpable tension.”

As he downloaded images and worked with assembling them various ways, the artist’s sense of intrigue with the killed images deepened. McDowell sees the black hole itself as “a contemporary mark,” evoking the work of an artist such as John Baldessari. Whereas the intact FSA photos only deal with the past, in McDowell’s opinion, the killed photos connect with our age through that black circle. “It got me thinking about the parallels between the time that we live in and the Great Depression and post-Depression times. There are some chilling parallels in terms of the impact on the average person in society,” he says.

The pieces that McDowell has worked with—in some instances printing the entire frame, in others cropping in to place the hole dead-center—are now the product of three unlikely collaborators: the original photographer in the field, a government staffer simply doing his duty, and a contemporary artist re-contextualizing the image.

With support from a UVM REACH grant and a fellowship from the Peter S. Reed Foundation, McDowell has created several dummy books of the printed negatives and submitted them to publishers and museums. Very good news on that front came recently when the Yale Art Gallery purchased prints of all seventy-nine images in the book.

McDowell is hopeful more good news might be ahead if a publisher bites on his book proposal and suggestion to open the volume with an introduction by a writer outside of the art world—someone like an economist with a sense of history or farmer/poet/philosopher Wendell Berry or even singer/songwriter/author Rosanne Cash, whose father, Johnny, grew up in a home in Arkansas built by the Farm Security Administration.