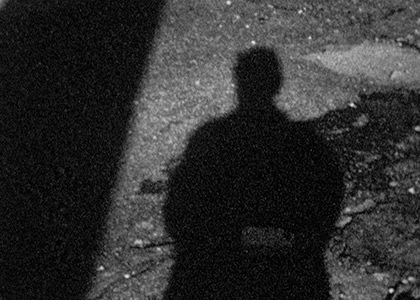 Call it audacity. Call it chutzpah. Call it something we can’t call it in a family oriented university publication. This ability to “put yourself out there” through a leap of faith is an essential skill for any artist. In sparking an unlikely collaboration between legendary German director Werner Herzog and two classes of UVM undergrad filmmakers, visiting professor Peter Shellenberger has given his students an immersive lesson in what can happen if you’re willing to take a chance.

Some background: Shellenberger, an adjunct faculty member covering classes for Professor Ted Lyman in the Art & Art History Department this academic year, is a photographer/filmmaker/teacher who has an affinity for the anachronistic Super 8 film format. He spent some seven years developing a Super 8-based course at the Maine College of Art, and when the opportunity arose to teach film production at UVM, it seemed a natural that he bring it to Vermont. The fact that Lyman had fifteen circa 1975 Super 8 cameras, still in boxes, lined up on the shelf of his office? Pure serendipity and a clincher.

The plot thickened when Shellenberger spotted a notice in local weekly Seven Days that Werner Herzog would be speaking at two events at Dartmouth College in early September. Working together, Shellenberger and his classes devised a plan to attend one of the events with a boxed-up Super 8 camera loaded with film, offering it to Herzog with the proposal that he shoot the 3.5-minute reel, return it to them for developing, then they would develop their own films in response. From every nuance of their note to the rubberband around the box, they carefully pondered the proposal and its presentation. Herzog, one of the most noted directors of his time with titles such as Aguirre, The Wrath of God; Fitzcarraldo; Grizzly Man; and Nosferatu in his extensive filmography, is a formidable presence, not a man to be trifled with.

Though tickets were scarce for Herzog’s first appearance, a Dartmouth staffer reserved two for Shellenberger. (The entire class would get their field trip several days later when Herzog and Ken Burns discussed documentaries in tandem.) So it was that Shellenberger drove down to Hanover, seized his opportunity during the Q and A period, stood up in the third row of a Dartmouth auditorium, fought back nerves, and made the pitch on behalf of his students. “He stared at me for a while,” Shellenberger says, as he recounts the story while sitting in his Williams Hall office. “And he’s an intense person, he really is. The eye contact was intense. Then Herzog kind of scooched up to the edge of his seat and he said that yes, he hadn’t worked in Super 8 in such a long time, but, yes, he would take it. No guarantees, but he would take it.”

Two weeks later, Herzog returned the camera and the exposed reel for developing along with a typewritten, hand-signed letter detailing how he wanted this collaboration to play out. Shellenberger digs out the envelope from a stack on his desk and shares Herzog’s note. The words, which have the hint of a ransom note, beg the deep, soft hiss of the German filmmaker’s voice—“…What should happen is the following: please develop the film and hand it over to your students. My demand is the following: they have to make films, collectively or individually, which should include my footage. Obviously, they do not need to take everything, nor in the order I filmed the material. The title of their film/films has to be WHERE’S DA PARTY AT? In my footage this appears in one of the graffiti, and at least this portion of the text should appear in the film, or all the films…”

Herzog’s black-and-white footage, shot in an abandoned industrial building on a Sunday morning, is rough. Some of it is very dark, but with striking images such as water dripping into a puddle and a couple of instances where the looming shadow of the filmmaker appears in the foreground. The lack of perfection, the mistakes, the roughness of it meshes with Shellenberger’s reasons for teaching film students via Super 8. Old school can offer new insight.

“With a Super 8 cartridge you only have three and a half minutes to say what you want to say, trying to get all of these things to take place,” Shellenberger says. “There is no erasing it. There is no checking your little screen to see how it looks. At the end of the day, what I’m interested in developing is their instincts as filmmakers. I don’t know how digital really does that in a way. If something doesn’t go right, you’re relying on the technology to back you up. Super 8 there is nothing there. There is just you.”

Student Emma Stern calls the Herzog collaboration “surreal” and says she has grown through working in the throwback medium. “Working with Super 8 is a very physical experience,” she says. “You have to be physically in touch with the camera and hope that it captures what you see through it. I’ve also found that filming with Super 8 requires you to slow down and make time. I’ve had my hits and misses with Super 8 so far, and I still feel like I have a lot to learn.”
Fellow student Zach Pughe-Sanford was at work on a film that will explore a human shadow theme in response to the filmmaker’s shadow in Herzog’s work. And once he has his film completed, Pughe-Sanford has an audacious plan of his own. On an upcoming trip to Los Angeles, he’s going to make a quest to track Herzog down with hopes to hand him his film in person.

Sam Kleh and four classmates have collaborated on a work that he describes as a noir piece that will pick up on the gritty, industrial setting of Herzog’s film. He notes that Super 8 is an ideal medium for highlighting contrast and light, the look they’re seeking. Works in progress sometimes have those pivotal moments, mystical assurance that the path is worthy, that can spur a project on. For Kleh and friends this happened when they scouted the waterfront railroad tracks in Burlington as a locale and came upon a long freight, thirty cars hitched together, the same name emblazoned on each one:  “Herzog.” 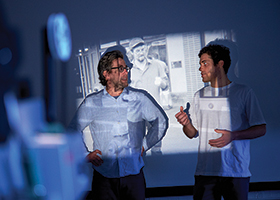