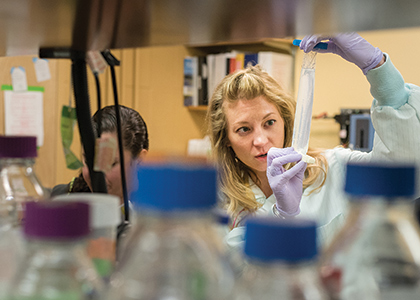 Rachael Oldinski would like to cure cancer, replace cartilage, and patch punctured lungs—with seaweed. Okay, it’s more complicated than that. But, one afternoon this spring, behind the locked doors of her lab in Votey Hall—the Engineered Biomaterials Research Laboratory—the professor points to three of her graduate students and four undergrads. “Everyone here works with alginate,” she says, “which is purified seaweed.”

You might call it the goo lab. Canaan McKenzie ’16 holds up a clear strip of gelatinous plastic that he made with several natural products including alginate and collagen. “The collagen is from the livestock industry,” he says. “It’s exactly the same stuff as goes into Jell-O.”

Sarah Blatt ’16 is working with Oldinski to create a jelly to see how well it will mimic the properties of the inner region of the human spine. Normally, this nucleus pulposus gel is the shock absorber within the discs between each vertebra. “But in disease, that jelly leaks out,” Oldinski says. So, as a senior project, Blatt is looking for a “material replacement,” she says.

Underlying the great-fun-with-squishy-stuff ethos of the lab, Oldinski has a deadly serious set of goals. One is to do basic work on the mechanics and chemistry of these various goos, a family of materials called hydrogels. “Can we create products that are smart—that are responsive to changing pH or temperature or biological conditions? Can we create products like skin, that stretch and reorganize themselves over and over without failing?” Oldinski asks. On the other side of the bench from her, doctoral student Spencer Fenn squirts a purple blob of alginate onto a glass slide and spins the slide inside a small centrifuge.

He then places the goo-covered-slide inside a box filled with green LED lights. Because of complex manipulations he’s done to the goo’s chemistry, under the light the long strands of polymers within the liquid will link with other strands. After a few minutes, he takes out the slide. “See, it’s become a hydrogel film. It’s no longer a liquid; it’s a solid.”

Fenn has been spearheading a research effort to use alginate gels to create a kind of Band-Aid for the lung. Whether from a car crash or disease or battlefield injury, once a lung is punctured it is difficult to seal and heal, since it is constantly inflating and deflating. He and Oldinski and others in both UVM’s College of Engineering and Mathematical Sciences and College of Medicine have developed a patch that looks promising for clinical use. Once it is freeze-dried, a surgeon will be able to cut a piece of the hydrogel, apply it to the wound and let it rehydrate from the body’s own water. Then, using a scope with a green light, transform the goopy patch into an adhesive lung sealant. This innovation promises to be non-toxic and a recent study by the lab team shows that the patch can withstand lung-like pressures.

But Oldinksi’s top goal for developing hydrogels and other engineered biomaterials is to find better forms of drug delivery, particularly for cancer treatments.  Fenn holds up his slide to the light. It glows a faint pink. “It’s red because of doxorubicin hydrochloride, which is a chemotherapy drug,” Fenn says. He’s mixed the drug into the alginate patch, as well as into alginate microparticles—that were also mixed into the liquid before being treated with the green light. “It’s a hydrogel inside a hydrogel,” he says.

In another room of the lab, Oldinski’s team experiments with lines of human cancer cells. Eventually, this drug-soaked patch will be tested there to see how well it works. “The patch and the particles will release the drug at different rates,” Fenn notes—aiding a steady flow of medicines locally in the body. “After a doctor removes a tumor, there are often residual cancer cells left,” he says. “You could apply this patch on the site of the surgery, which would release high concentrations of the chemo drug there, but keep systemic concentrations down.”

At the other end of the lab bench, doctoral student Tianxin Miao works quietly, using a tabletop shaker to mix water and oil in a beaker. It’s part of a complex process to create nanoscale alginate particles. “They’re like a meatball of water, seaweed, calcium chloride and a drug,” Miao says. Except the balls are thousands of times smaller than the period on the end of this sentence. What Miao, Oldinski, and Jeffrey Spees, a professor in UVM’s College of Medicine, have discovered they can do with these tiny particles of seaweed may “be huge,” Oldinski says. “It could be a brand-new treatment for cancer.”

The nanospheres Miao created are “really ninja beads,” Oldinski says. Recent reports show that a naturally occurring protein, called fibroblast growth factor 2, that sends signals on the outside of cells, behaves very differently—if it gets inside a cell. There, it can function like a hormone to inhibit growth and kill cells—including cancers. Using this knowledge, Miao and Oldinski mixed the growth factor into a highly engineered form of their alginate meatballs, called alginate-graft-PEG, and then released them into a sample of human lung cancer cells.

The scientists were pleased and amazed that the nanospheres slipped past the cells’ surface receptors for the growth factor—and got inside. There, the tiny alginate balls moved to the cells’ nuclei “and released their bomb: the growth factor,” Oldinski says. “It kills the cancer.”  In Montreal, on May 19, Tianxin Miao presented the team’s results to the World Biomaterials Congress. It’s a “stealth mechanism,” she notes, that shut down the growth of the lung cancer cells.

At its foundation, Oldinski’s aim is to imitate nature “to replace nature,” she says—but then to use the replacement materials to restore regular biological function. Take the cartilage in a knee. She and her students study the mechanics and elasticity of complex mixes of natural materials that could be used to replace damaged cartilage. “This stuff is squishy,” she says holding up a plug of alginate gel, “it’s similar to the cartilage in your knee.” But a deeper solution to the problem requires a deeper imitation of nature. “For true healing, the gold standard is cell replacement,” Oldinski says. And she sees a role for hydrogels in that too: she and her students are working on products that could be used to temporarily replace damaged cartilage but would also carry drugs and stem cells that themselves would attract the body’s own stem cell production. “If we can lead the body to produce its own new cartilage,” say Tianxin Miao, “then you don’t need a plastic patch anymore.”