Test your knowledge of all things Catamounts 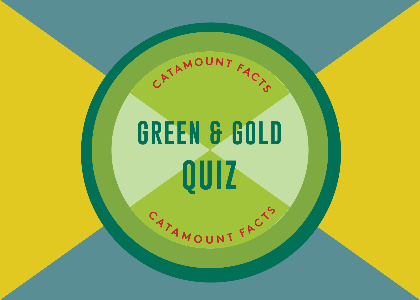 1. UVM English professor and poet Major Jackson wrote the liner notes for the 1994 album by these musicians:

2. In 1926, UVM students voted to choose a school mascot. Which of these animals were among the four options?
A. Camels   B. Bobcats   C. Porcupines   D. Fightin’ Newts

7. UVM alumnus Jon Kilik, Class of 1978, has these movies among his many credits as a producer:
A. Reservoir Dogs, Air Bud, Cujo   B.  Spotlight, Lord of the Rings, Frozen   C. Brokeback Mountain, The Ice Storm, Moonlight   D.  Do the Right Thing, Hunger Games trilogy, Foxcatcher

11. Prototypes for this revolutionary athletic garment were developed in the costume studio of UVM’s Royall Tyler Theatre:
A. The JogBra   B. The Buff   C. The smartphone arm strap   D. The skort

13. During the War of 1812, the university suspended operations and this campus building was used by the military as a temporary barracks.
A. Royall Tyler Theatre   B. Patrick Gym   C. Old Mill   D. Converse Hall

15. Which movie starring Harrison Ford was filmed, in part, at UVM ?
A. Star Wars   B. Witness   C. Raiders of the Lost Ark   D. What Lies Beneath