The Gloves of Summer 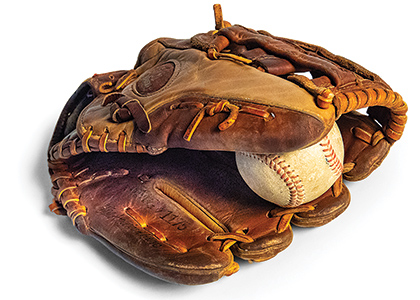 What is the first sensation that comes to mind when you think about a baseball glove?

Maybe it’s the smell. There is something utterly distinctive about the smell of a baseball glove. Like “new car smell,” or “Chinatown,” a baseball glove is an amalgam of aromas combining together to produce a scent unlike anything else. Even though individual expressions of the form may vary (a Subaru smells different than a Porsche and Montreal’s Chinatown is distinct from New York’s or San Francisco’s), there is nevertheless no mistaking the smell of a new car for the smell of Chinatown.

It is the same for a baseball glove. New, there is the odor of leather, and coupled with that is the smell of the tanning process that gives the leather its character. Each color of dye imparts a slightly different scent character. A black glove, a walnut glove, and a red glove will all smell slightly different. Perhaps, at the wrist strap there is the funk of lamb’s wool and the slightly acrid, caustic tinge of new stitching in the embroidered label. The lettering, burned into the leather, imparts more notes.

But the smell of a new glove is like an opening movement when compared to the symphony of a broken-in and well-used glove—a sonnet compared to an epic poem. A well-worn glove still holds the memory of the new glove as an undertone, but it also holds the scent of infield clay and outfield grass. Depending on how it is broken in, an older glove will smell of glove oil, or neatsfoot oil, or Vaseline. Or maybe, alongside the grass and the dust, it will smell just slightly of shaving cream, of lanolin, of a parent or grandparent, who smelled something like that glove when they taught you to shave or when they sat close by your side and told you the mysteries of the game like they were revealing to you the meaning of the world.

And lastly, a well-worn glove will smell like sweat and salt. The lambswool and the padding and the leather itself will absorb the smell of the wearer, of the days in the sun spent playing and the nights on the couch spent pounding the pocket into just the right shape.

Or maybe the sensation you first experience is what a glove looks like. Again, a new glove and old present a different aesthetic. New, the leather fairly shines, its lacing and stitching, crisp, clean and true. Its label stands off from the leather like a billboard on a buff landscape—which is just what the label is—advertising to the world that the owner is partisan of Rawlings, with its classic sweeping white script on a red background. Then there are the aspirational “E’s” for Easton, vectoring in three directions into infinity, or some players will sport the geometric “M’s” and abstracted “runbird” distinctive to Mizuno, or maybe, depending on the player and the year, is the profile—not unlike the face on the old buffalo nickel—of Comanche Chief Peta Nocona on the wrist of a Nokona ball glove.

As with the smell of a broken-in glove, the look of an older model is likewise distinctive. The pocket is darker where the sweat and the oil and a thousand caught balls combine, the tooled letters in the palm obliterated by endless pounding. The labels are faded and frayed. For some, the laces will be cracked and re-knotted; for others, there will be efforts at repair, sprucing up, and customization: New laces and cleaned leather, inked and painted sections, providing a player’s glove with personality. This past summer, a teammate of mine arrived at a game with a glove he had bought on eBay. It was a basic, conservative Rawlings first basemen’s mitt, walnut brown in color, but the previous owner had relaced the entire glove with baby blue laces. We both agreed it was one of the most beautiful things we had ever seen.

Sound, likewise, plays its part in the experience of a glove. A new glove gently creaks as you bend and fold it, the fibers of the leather straining as the owner tries to make it pliable. The thumb and pinky softly click—“tick, tick!”—together as you stiffly close your hand, trying to loosen the glove’s hinges. The sounds of a new glove are tentative and expectant, but soon, those sounds will be replaced by more assertive ones. The fingers will snap together with force and you’ll hear the explosive pop of a baseball hitting the pocket of the glove. When people describe the sounds of a game of baseball, they often talk about “the crack of the bat” as though that is somehow unique to the game, but wooden bats and mallets strike balls in many sports. For me, the sound of a ball meeting a glove is truly unlike any sound in the world. In one of the interviews for the book, I traveled to Meriden, Connecticut, to speak to the “Glovesmith” Dave Katz, who breaks in gloves for people. As we spoke, Dave and I took turns pounding a ball into one of my gloves. The audio file of our interview is punctuated with that sound just as surely as the written transcript is dotted with periods and commas.

Of course, for you, the sense of touch might be the first thing you experience. The stiffness of a new glove fights against the tendons of your hands and fingers. It is frankly uncomfortable to try on a new glove. The leather is slick and unnatural, and you have to contort your hand into a stiffened claw to put your fingers in their stalls—the space for your fingers to rest while waiting for action. Broken in, the feel of a glove is something else altogether. It fits—well, not really like a glove, not these days. Rather, a well-worn glove feels more like a hammer in the hand, a tool exquisitely designed to do a certain job (catching a nine-inch circumference sphere), and the increasing suppleness of the leather as it breaks in only enhances the efficiency with which it accomplishes that task.

Finally, lest you think you are forgotten—although I can’t imagine there are many people for whom this the primary sensation of the glove—a glove has a taste. Watch a game at any level. Little Leaguers will be distractedly gnawing on their laces, while older players will use their teeth to tighten them so as to not have to take the glove off of their hands while in the field. Here, as with the other senses, the taste of the glove—of leather and sunshine and dust—is all its own.

All of this is to say that a baseball glove is a profoundly material object, appealing to all of the senses, and no account of a baseball glove’s cultural significance can—or should—ignore that materiality. The material facts of a baseball glove’s existence come into being as the result of a set of historical and cultural processes. The transformation of a piece of raw material, generally—although not exclusively—a piece of leather made from tanned steer hide, into a consumer product suited to playing the game of baseball seems like a relatively straightforward, even inevitable, process. But when considered in light of the history of the game, of changing ideas about gender, masculinity, race, and national identity, of evolving concepts of fair play, and of a transforming global economy, we can see that the material fact of a baseball glove is neither straightforward nor is it inevitable.

David Jenemann, interim dean of UVM’s Honors College, associate professor of English, and second baseman for the Burlington Cardinals in the Vermont Senior Baseball League, is the author of The Baseball Glove: History, Material, Meaning, and Value (Routledge). This essay is excerpted from the 2018 publication.