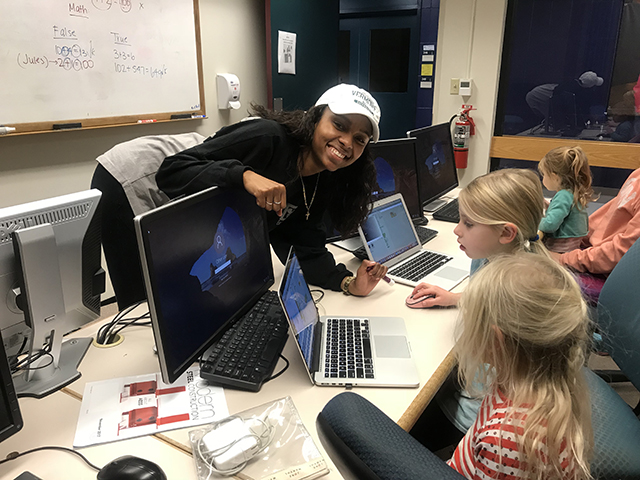 As a high schooler in the Bronx, Nikki Allen ‘19 enjoyed the popular blog site Tumblr, but wanted to make better-looking templates and add customization. “I’d pull from other sites and put them in Tumblr, and I realized I was learning HTML, CSS and JavaScript,” recalls Allen, now a junior at UVM. “I was learning how to code — and learning how flexible computer science could be.”

Now, Allen is sharing that sense of discovery with girls as young as 4 as she devotes a few hours each Friday. Yes — 4-year-old Julie and her older sister Kyla, 6, are already learning to do much more than drag, drop thanks to their computer science lessons with Allen, for which they travel from Charlotte to the UVM campus.

The connection came about when Nikki accompanied a group of UVM computer science students and faculty to The Grace Hopper Celebration in October 2017, the world's largest gathering of women technologists. Allen learned from Maggie Eppstein, Chair of Computer Science at UVM, that the two girls were looking for a tutor. “I just jumped at the opportunity,” says Allen. “I was going to tutor them at home, but we thought it would be more interesting in a college setting. They were definitely nervous at first, but I was so excited, and they opened up quickly. Now, they are so sure of themselves, and ready to start coding when they get back in their dad’s car!”

Having attended Collegiate Institute for Math and Science, Allen was naturally inclined toward an interest in STEM, and has several internships to prepare her for her career after college. She’s worked with Girls Who Code (GWC) on its goal to reach 1 million by 2020, and has also been a GWC teacher’s assistant. Her favorite stint, however, was serving as a software development and editorial intern for AOL-owned Cambio.com. “I was able to perform tasks and see immediate results,” she says.

Allen adds that Eppstein has been an enormous influence on her college career, followed by Joan Rosebush and Jim Eddy, the professor who’s helping her prep for a job in cybersecurity. Her advice for incoming freshman? “Learning how to manage your time wisely is key,” says Allen. “Don’t be afraid to ask questions in class, because there’s a good chance that other people have the same question. Take advantage of office hours — if not to have a better understanding, then just to introduce yourself.”

Her next internship is at Bank of America in the summer of 2018, for which she’ll return to New York City. She is pursuing a career in cybersecurity and also intends to stay involved in community education and outreach after graduation. “Once you give a girl a computer and show her what she can do, the possibilities are endless.”