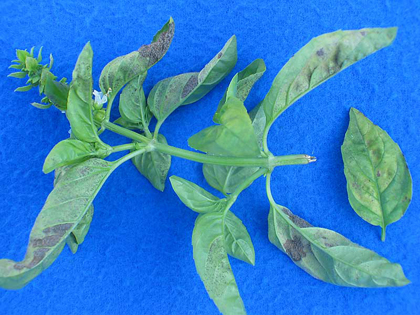 Burlington--The first case this year of downy mildew on basil was diagnosed by the University of Vermont (UVM) Plant Diagnostic Clinic on July 23. The infected plant sample came from a home garden in Burlington.

"Although the pathogen does not overwinter in Vermont, since 2008 we have had to contend with the disease every summer, typically in July," says Ann Hazelrigg, UVM Extension plant pathologist.

"Basil is the leading culinary herb grown in the country, and fairly easy to grow. Disease was not a concern until the fall of 2007, when downy mildew was first reported in Florida, followed by widespread reports in several states including Vermont in 2008 in both greenhouse and garden settings."

Growers and home gardeners should be on the watch for this destructive disease. The most notable symptom is a yellowing of the foliage, often confused with a nutritional deficiency.

The gray spores of the fungus, giving the undersides a "dirty" appearance, is another indication of downy mildew. Even if not visible, if the pathogen is present, the spores will be evident within a day if suspect basil leaves are placed in a plastic bag with a moist paper towel in a dark location overnight.

The pathogen can be seed-borne or spread by air-borne spores and prefers wet or humid conditions. Growing basil where it gets plenty of sun and is not overcrowded may help.

However, once the disease is present, it spreads rapidly and management is difficult. Often the infection results in total crop loss.

"Growers can purchase disease-free seed for next season that has been "steam-treated" to kill the pathogen," Hazelrigg recommends. "This will eliminate the chance the disease originated in the seed. The plant still will be susceptible later in the season from air-borne spores."

Less susceptible basil species are available, but these do not offer the same flavor or leaf color as the common sweet basil (Ocimum basilicum) that most gardeners prefer for pesto and other uses. Plant breeders currently are trying to develop new downy mildew-resistant varieties.

Fungicides can be used to manage the disease but would need to be applied before the symptoms appear and be repeated often. Basil crops should be turned under or destroyed as soon as possible after the infection is found to eliminate this source of inoculum for other plantings.

For more information on the disease or to view images, go to http://vegetablemdonline.ppath.cornell.edu/NewsArticles/BasilDowny.html. 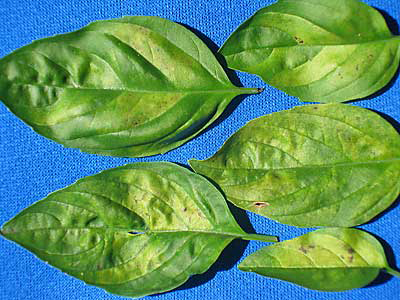 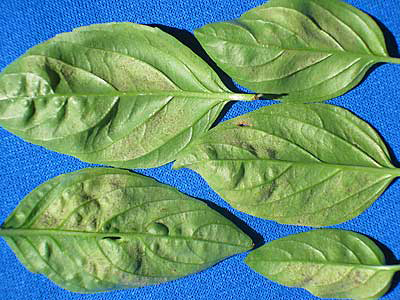