From Film to Farm 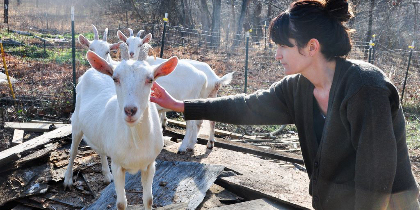 Before Katrina Light came to UVM to pursue a master’s degree in the Food Systems Graduate Program, she was managing a film studio in New York City. Jump ahead a few years, and her fast-paced urban life has given way to a series of very different routines. In the summer, she starts her day at 5:30 a.m., milking cows and instructing high school students in farm chores. During the academic year, she crunches numbers to calculate the carbon footprint of Bard College’s dining program and teaches students about the farm to institution movement.

Since graduating from UVM in December of 2014, Katrina has jumped at opportunities left and right to apply her food systems knowledge and skills. In February, 2015, she was hired by Chartwells, a dining service company, as the director of food sustainability at Bard College in New York State. While she had received a few part-time job offers at small nonprofits, she felt she could make the biggest impact in the food system with a role at Chartwells. "It's definitely an uphill battle at times, but we're paving the way for more schools to make the transition to supporting their local foodshed."

Her first task was to complete Bard’s commitment to the Real Food Challenge, to purchase 20% Real Food. When she arrived, Bard was purchasing 18% Real Food. Within a few months, she had managed to make additional procurement shifts that bumped the campus up to the 20% goal.

In addition to Bard, Katrina also works at The Putney School summer programs teaching the farm and culinary workshops. Katrina had reconnected with the Putney School during grad school, while collecting milk samples from their dairy, as part of a research project with UVM faculty member John Barlow. Barlow was testing milk from farms around the state that supply artisanal cheese makers. With her new experiences on dairy farms, it felt like a natural fit to return to Putney to teach teenagers about farming.

When she returned to Bard for the start of the academic year, Katrina shifted her energy to composting, energy, and behavior change initiatives. She also launched a food recovery program in collaboration with a “zero waste” student club. Three days a week, staff and faculty volunteers drive lunch leftovers to a local food bank on their way home from campus.

Katrina is a member of the Bard Sustainability Council, which aims to make Bard a carbon-neutral institution. To date, Bard’s dining system hasn’t been calculated as part of that analysis, so Katrina has been using a Chartwells tool to see what can be done to reduce base consumption. Last year, she partnered with a class to figure out how Bard’s dining carbon footprint would change if they cut beef consumption in half. In addition to her work at Bard, Katrina runs a regional Sustainability Working Group with managers at other Chartwells campuses.

Even with all these initiatives, Katrina feels there is always much more to do. After Bard recently purchased 400 acres of land, she started dreaming of a future for more agriculture on campus. At present, a 1.25-acre garden sells 20,000 pounds of produce to Bard dining each year. She’d like to take advantage of the new land acquisition to supply more fresh food to students, and maybe even incorporate animals in the production system.

She also wants to improve the compost system on campus, shift student attitudes about all-you-can-eat dining, and involve more students in sustainable dining initiatives. This fall, she’s teaching an upper level course on the farm to institution movement. Her students will have an opportunity to research food products and dining operations and make suggestions for improvements.

Katrina is also committed to increasing practical cooking skills both at Bard and the Putney School. This past summer, she returned to Putney and transformed the biology lab into a foods lab, to offer culinary classes every afternoon after farm chores. This made for long days, but she found it rewarding to teach basic cooking skills to students from all over the world. Some of the students had never opened a can of food before, and by the end of the summer, they had made kimchi, cheese, pizza, and a meal for the entire school.

In all of these endeavors, Katrina is glad her time at UVM gave her a foundation in critical thinking and innovation. As a self-described interdisciplinary thinker, she enjoys taking on these different roles in the food system. “Graduate school reawakened my various passions, and that helped me patchwork together a series of jobs that work for me. They match my various interests and how I make sense of the world.”