No pause when Amanda Pelkey plays 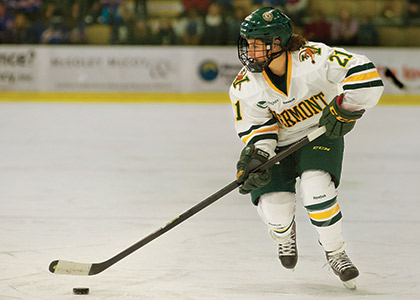 No pause when Amanda Pelkey plays

It’s a Monday afternoon in Patrick Gym, and Amanda Pelkey ’15 is drinking something pink, her hair wrapped in a ballerina-like topknot as she gushes about her secretarial skills.

Make no mistake, however. This is a woman who can whip just about anyone on the ice, as the star forward for the Catamounts hockey team. That pink drink? It’s a Biosteel high performance recovery formula; after a practice session in the rink, the exercise and movement science major has just logged a workout in the weight room, which also explains the ’do. And you’d have killer organizational skills and a trusty day planner, too, if you were on Pelkey’s streak.

Think skating in all ninety-three games of the last three seasons and setting UVM and conference records in goals and points after becoming the youngest member of the U.S. Women’s National U18 Team at age fifteen and winning gold in Germany. And, oh yeah, trying out for the Sochi Olympic Winter Games last year. What’s next? “I have to rush to coach lessons one-on-one in Stowe, and I have an exam tomorrow,” says Pelkey. “I’m just trying to get through the day, juggle my time management.”

Juggling would be right up Pelkey’s alley, considering her impressive coordination. When she was a tot growing up in Montpelier, Vermont, and still in diapers, Pelkey wandered into her older brother’s closet, slipped her feet into his Rollerblades and breezed down the hallway, perfectly balanced. Her astonished mom said, “Figure skates!” But her hockey-mad dad said: “No way. REAL skates.”

“And that’s how it all started,” says Pelkey today with one of the many laughs that pepper her conversation. By age three, she was skating around the backyard rink that Dad had built; some of her most vivid memories of specific goals trace all the way back to toddlerhood.
“It just seemed like I was born to be in that habitat,” says Pelkey, who recalls elementary days mostly for the way they were punctuated by afterschool sessions on the ice, in the backyard and at the practice rink in Barre, right up until bedtime. “I loved the flow of it; I loved stick handling, and I loved watching games at Norwich; I was just glued to how the plays would happen.”

Pretty soon, Pelkey was the one making the plays happen, attending high school at the North American Hockey Academy in Stowe and landing on the national team before she’d even turned sixteen. With women’s hockey beginning to take center stage at the Olympic Winter Games, Pelkey had no shortage of role models, but says she was particularly struck while watching Cammi Granato play at the Red, White & Blue Camp (now called the August Festival) at Lake Placid.

“I remember thinking, ‘Wow, could I really be that good someday?’” says Pelkey. “And Cammi was always the last person off the ice, and always picked up the pucks. That’s respectful.”

Skip ahead to the tryouts for the Sochi Olympic Winter Games, during which Pelkey had not only reached her role model’s level, but was also emulating the Olympian’s grace, determination, and respect on the ice.

That reflects brilliantly on the rest of the UVM women’s hockey team, says head coach Jim Plumer, who explains that Pelkey’s gifted offense is augmented by extra time in the weight room, her humility, and her refusal to take anything for granted.

“She’s become a leader, and her work ethic, competitive spirit and humble, team-first attitude make her a great role model for our younger players,” says Plumer. “As much as anything, Amanda has a passion for the game of hockey, and that is something that is definitely part of the spirit of our program.”

Pelkey seems proud of the way her team is playing these days, but quickly deflects any credit for the team’s recent success. “We’ve always been an ‘in-the-mix’ program, but every year since I’ve been here it’s been an upward climb, so we’re becoming more of a threat than just a challenge,” she says. “This season, it’s leaps and bounds already—on the ice, the freshman class are smart, they’re quick, they’re passing. Off the ice, you couldn’t ask for better teammates. It just gives us more depth, which can go a long way.”

When it comes to going long ways, Pelkey is a seasoned traveler who listens to Rascal Flatts while on hockey bus trips and ticks off Germany, the Czech Republic, and Calgary among her favorite destinations. Still, despite dreams of oh, maybe the Caribbean or Italy with her mom (a hair stylist; Dad owns a sandblasting company), the senior hopes to be bound for Boston next year, where she can continue to compete and coach. She loves organizing the lessons, but there’s something else, as well, that brings it full circle.

“I see that they look up to me, and when they smile—that’s all I hope they do, that they love it,” says Pelkey. “But at times I think I’m still that young girl looking up.”