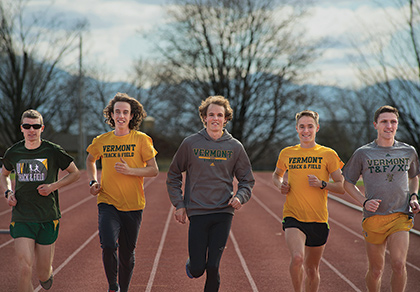 It took a few minutes for Fletcher Hazlehurst to get his head around what associate track and cross country coach Joe Gingras ’99 had just told him and four of his teammates—that they had the potential to be the best circle of distance runners to ever compete for UVM.

That was two years ago. Since then, Hazlehurst and junior classmates Aaron Anderstrom, Oliver Scofield, Dan Moroney, and Thomas O’Leary have dedicated much of their collegiate lives—starting each day with a 5 a.m. run—to making that lofty prediction come true. “It’s something that motivates us to work together,” says Hazlehurst, an all-New England selection at 10,000 meters. “It psyches me up to be part of something this big. We’re all good individual runners, but to be here together and doing all these things as a group is what makes it so exciting.”

Thus far, the ‘fast five’ has lived up to their billing by rewriting the record books and closing in on a goal they set last year: to own every UVM distance record between 800 and 10,000 meters. They attribute their success to hard work, but also their closeness as athletes, students, and friends. They pretty much live, eat, run, study, and socialize together while sharing three rooms on the same floor in Converse Hall.

Walk into Moroney’s room, which he shares with Anderstrom, and it’s immediately apparent that they are running obsessed. The walls are covered with posters of legends like Steve Prefontaine and hand-scrawled inspirational quotes—“When in doubt, hammer from the gun.”

They seem like brothers, which makes the fact that they never met prior to arriving on campus from their respective home states of Oregon, Massachusetts, Wyoming, Connecticut, and New Hampshire all the more surprising. “We do pretty much everything together,” says Moroney, who owns school records at 5,000 (14:26) and 3,000 (8:20) meters, and has the second-fastest 10,000-meter time. “There are days that I don’t want to get up at five in the morning to go running, but we hold each other accountable and get each other out the door.”

That accountability extends to the classroom, where they have also produced some impressive numbers: a combined GPA of 3.7 in computer science (Hazlehurst); nursing (Anderstrom); parks recreation & tourism (Scofield); medical lab science (Moroney); and biology (O’Leary). Their success on the track and in the classroom doesn’t come without a price and lots of planning. Anderstrom, who is second on UVM’s all-time 3,000-meter steeplechase list, recounts a recent day: the dawn five-miler, breakfast, two classes, lunch, another class, track practice, chart reviews at the hospital as part of his major, two hours of studying, and, finally, some coveted sleep.

“Some people think we’re weird or boring because of our schedules, but they respect it,” says O’Leary, who holds the school record in the mile at 4:07 and has run a 4:04 1,600-meter split as part of a distance medley relay team. “UVM is a place where people let other people do what they want,” adds Scofield, whose 5,000-meter time of 14:40 is third fastest in school history. “We just choose to run a lot.”

Gingras, who is described by his runners as a ‘mad scientist’ always tinkering with their training regimen, calls the group a coach’s dream. “They go to bed early most nights,” he says. “I got a call for a reference for a house they are moving into off-campus next semester and I was like, ‘These guys are going to be in bed so early you won’t even know they’re there.’ Some distance runners can be a little strange, but these guys are pretty normal.” That’s assuming you consider running 115 miles a week during the summer like Moroney ‘normal.’

“There’s a simplicity to the way they go about things,” says head track and field coach Matt Belfield. “They are serious about school and serious about running. They love the sport and the team, and are true UVM guys.”

Belfield, who also singles out two-time America East 400-meter hurdles champion Mallory Duncan and 110-meter hurdle and heptathlon star Martin Kallur as catalysts for his program’s rise, is careful about anointing the group as the best ever. But, he says, from a statistical standpoint it’s hard to argue otherwise. “You have to give credit to different generations like Ray Allen and his contemporaries from the 1950s who were on championship teams, but quantitatively speaking, there’s no question this year’s junior class is the best.”

If anyone would know, it would have to be Larry Kimball, who served as the UVM distance coach from 1990-98 and is considered the unofficial historian of Vermont running. He grew up watching the Archie Post-coached teams of the mid-1950s to early 1960s and considers them to be the standard by which all other UVM teams are measured with consideration also being given to some of the teams from the early 1970s and 80s.

“The Archie Post teams that won New England and Yankee Conference titles are the gold standard, but it’s hard to compare generations,” says Kimball, now head cross country and track and field coach at the University of South Carolina-Beaufort. “But this current group definitely stacks up with anyone in the past.”

The UVM Athletic Department hosted the eleventh edition of its annual Rally Awards, presented by XFINITY, in early May at the Flynn Center in downtown Burlington. The all-sports year-end event celebrated the accomplishments of the UVM student-athletes, honored each team’s MVP, and handed out seven major annual awards.

ATHLETIC DEPARTMENT AWARD
Bill Shean ’79 received this honor presented annually to a member of the faculty, staff, or community in appreciation of loyal support and continuing devotion to the University of Vermont athletic program.