Torres del Paine National Park in Chile, photographed around 6:30 a.m. on the way into the park on Jan. 31. Very rough roads, windy, and slow going, but the views kept us happy and moving forward.

Beginning in January 2017, alumnus Cameron Russell ’07 joined with friends Eli Bennett and Noah McCarter on an epic, 12,000-plus-mile bicycle journey from Ushuaia, Argentina, up the west coast of South America, through Central America, and back home through the United States to Vermont. Dubbed “Mundo Pequeno,” the trio’s ride was dedicated to strengthening a sense of global social connection via their travels. On Nov. 19, they rolled through northern Vermont to trip’s end at the Canadian border.

Among the many moments that resonated with their journey’s theme, Russell recalls a night’s stay in Chile, when an innkeeper drastically discounted her rates to give them shelter. “When we asked her about why she had been so generous, she replied that she thought we would do the same and that she was always happy to help young people follow their dreams,” he says. “It’s that type of openness and hospitality that we’ve been met with most of the way. We shared meals with gauchos and fellow travelers, took rides with truckers, twice, and pleaded with ferry captains to take our bikes. Nearly everywhere, we have been greeted with kindness.”

As a UVM undergrad, Russell majored in sociology, with his minor in community and international development. He was also very active in the Outing Club and other student leadership roles. He credits a strong “theory/practice” balance during his undergrad years for preparing him for his current work as outreach director with the Rights and Democracy organization and a previous role, in 2016, as coordinated campaign director for the Vermont Democratic Party.

Read on for a look at Mundo Pequeno moments from the road. 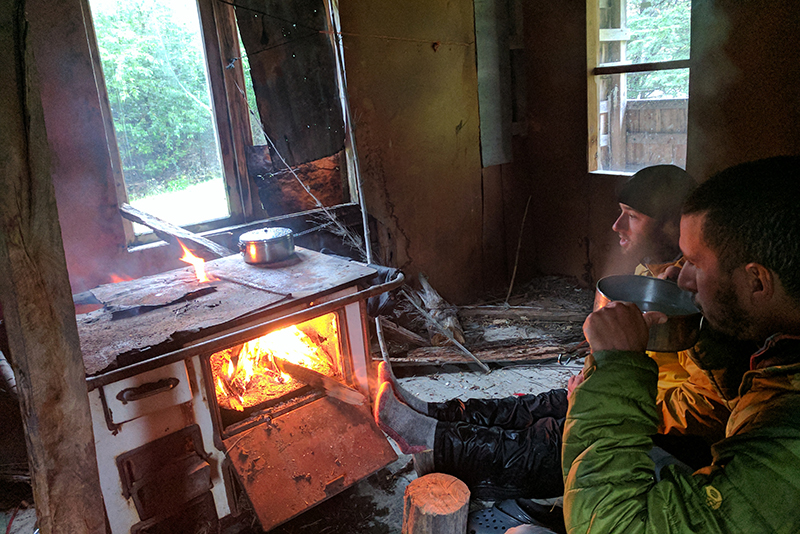 Cabin on the Carretera Austral in Chile, 6:30 .m., Feb. 18. We had to take refuge with the temperature around 40 degrees and heavy rains. Made a fire in a stove, with no stovepipe, to keep warm. It wasn't a glamorous spot, but it got us through the night. 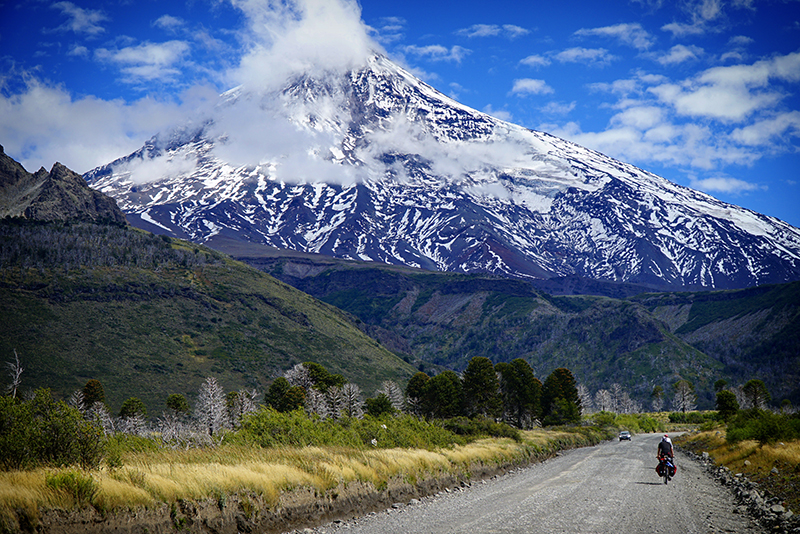 Volcan Lanin, morning of March 13, crossing from Argentina to Chile, east to west. The day after this, we would arrive in Pucon, Chile. The borders of both countries were, more or less, in view all day. 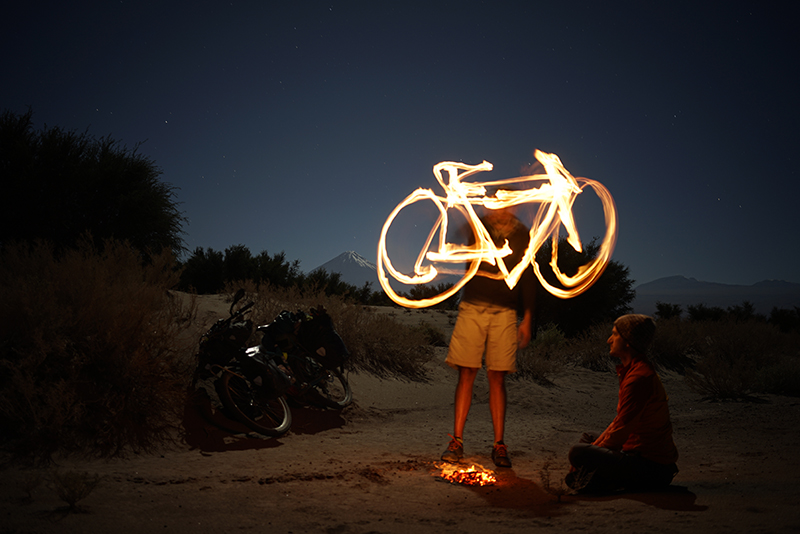 Camping outside San Pedro de Atacama, Chile, in early April, before climbing towards the volcano seen in the background in Bolivia. Photo is at about 9,000-feet elevation, before getting to around 16,000 in Bolivia. Cameron is making the bicycle design with a stick plucked from the fire; Noah is seated; and Eli took the photo with a 30-second exposure. 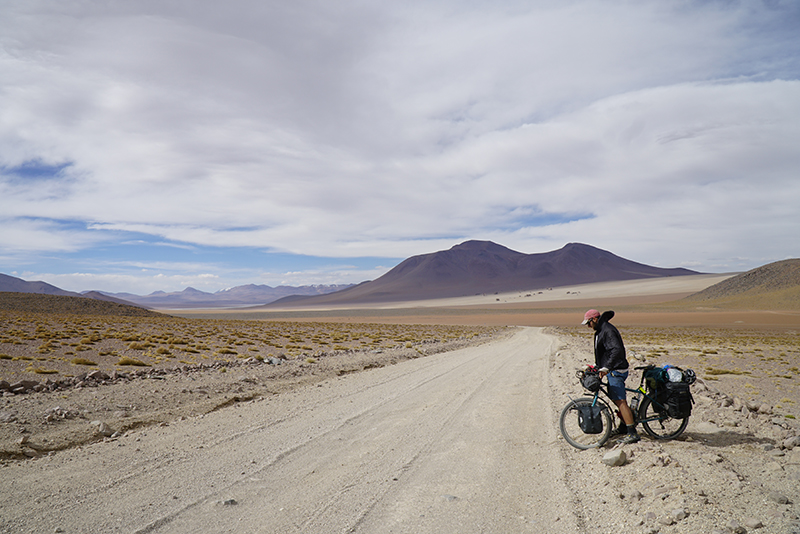 The "Lagoon Route" in Bolivia, between San Pedro de Atacama in Chile to Uyuni, Bolivia. Photo is taken at around 15,000-feet, where the altitude was very trying and made riding very slow. It was also very cold at altitude, dropping to near 0 degrees at night. 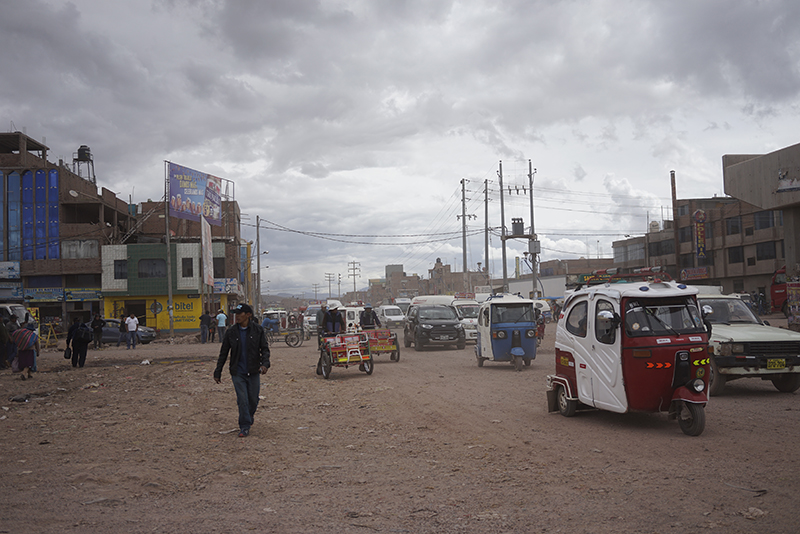 Juliaca, Peru, a very working-class town near Lago Titicaca. Representative of the type of riding we did during many parts of the trip. 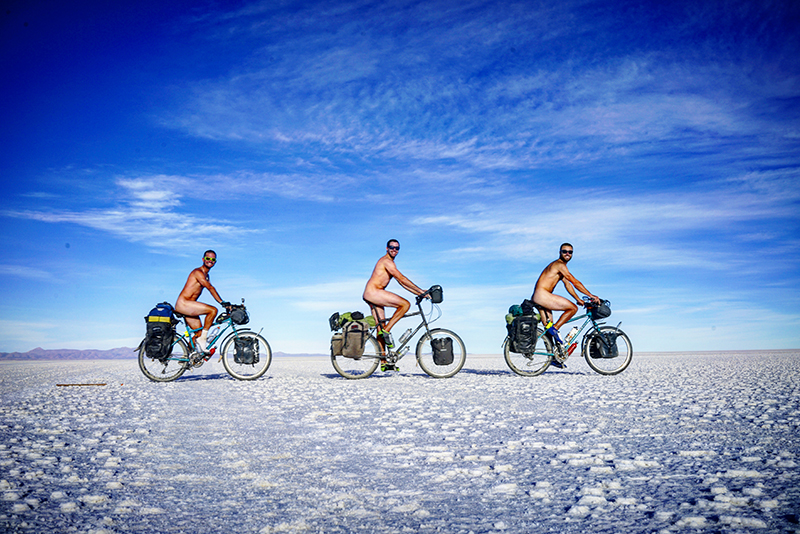 Bolivia’s Salar de Uyuni, the world’s largest salt flat, taken in mid-April using a timer. The photo came about because we had sponsorship from Darn Tough socks and Julbo sunglasses and wore only the gear from the companies that had sponsored us with the caption to an Instagram post reading "we could use a bit more coverage."

Early June, Canyon del Pato in Peru, a seemingly unending series of tunnels cut into the rock and a winding downhill for most of the day. 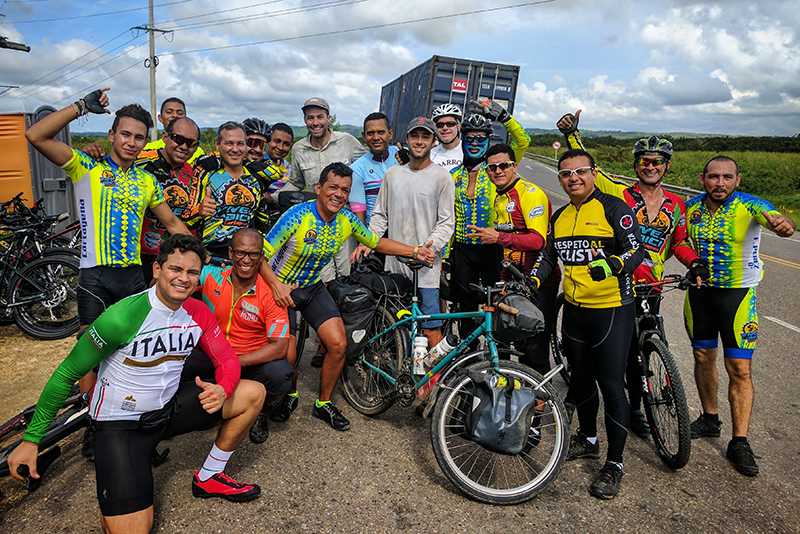 A cycling group we met just as we were coming into Cartagena, Colombia, where we found the most cycling-centric culture of all the countries through which we passed. After this photo, on July 17, we rode with the group for the next twenty or thirty kilometers. 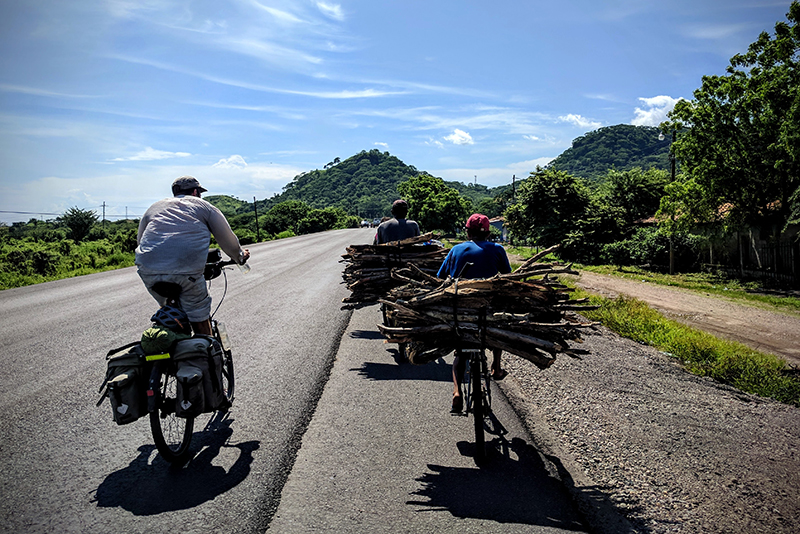 Honduras, Aug. 22. We met many locals collecting firewood by bike, and always felt the juxtaposition was interesting and, at times, conflicted. We were traveling through, with lots of privilege; the guys in these photos are surviving.

Nov. 19, 2017. At the Vermont-Canada border: Eli Bennett, left; Cameron Russell, center; Noah McCarter, right. Closed out the journey with a 50-mile ride north from Burlington through rain, wind and cold. We'd definitely had a lot anticipation leading up to the final ride and though, in many ways, it was surreal, it also kind of felt like any other day. It's a weird feeling to finish something like this, not knowing what to expect, or how you're supposed to feel—maybe hoping that spontaneous fireworks will go off at the border, but really, the best thing about finishing is knowing that you're home and back with your family and friends. Yes, there were times when we were physically and emotionally beat down on the trip, but I think the final day had us feeling more grateful than anything else. It was a dream come true.