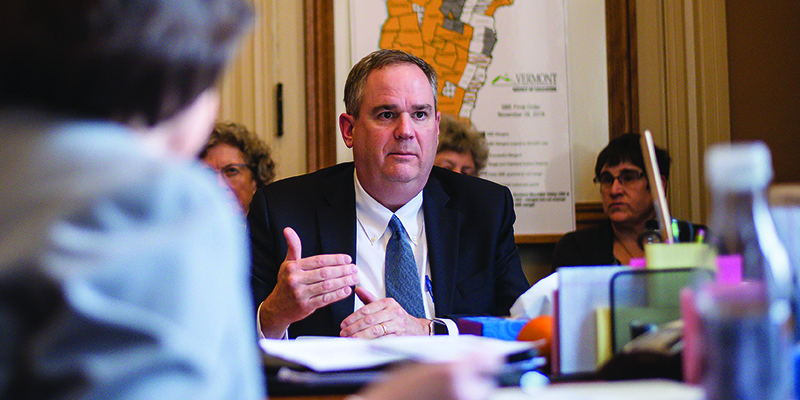 Defining the traits of a skilled educator, curiosity seems a solid place to start. Describing what initially intrigued him about Asian cultures as an eighth grader, Daniel French, Vermont’s Secretary of Education, puts it simply: “It was just a thing I didn’t know about, and I wanted to know more.” History, technology, there are many things French has wanted to know more about throughout his life, joking that if he isn’t intellectually engaged, it can be bad news for his wife and daughter. Innate curiosity coupled with an early knack for making complex concepts plain—he was the kid you called when struggling with your calculus homework—are at the root of French’s career in education.
Selected for the secretary post by Gov. Phil Scott ’80 in 2018, French brought broad and deep experience to the job—high school social studies teacher, principal (sole administrator of the preK-12 school with three hundred students in Canaan, Vermont), superintendent in two Vermont supervisory unions (Essex North and Bennington Rutland), and fifteen years as a consultant focused on strategic change and technology.

That knowledge served him well as he stepped into a challenging job during challenging times. “Vermont is a very small system in some ways. But we’re also a very complex system, because we have many school districts, many board members, many teachers,” French says. “My experience does give me a lot of fluency on issues that I can engage on pretty efficiently. I know who the players are, and I know the dynamics.”

Leaning on lessons learned as a superintendent, French says a key part of the secretary’s role is building out strong leadership throughout the agency. “I think the role of the state is best leveraged by helping to create that coherence in the complexity and be a convener of expertise. One of the things people should count on us to do at the state level is the data piece, provide clear indicators of outcomes for kids,” French says. “Under Vermont’s constitution, the state is ultimately responsible for the education of students. As much as we’re all conveners, we are also sort of insistent conveners: this isn’t really optional. We’re not going to say ‘here’s the right way to do it,’ but we want to make sure that the results are positive.”

Asked how much Act 46, Vermont state law regarding school district mergers, has consumed his life, French smiles. Juggling educational opportunity and economic efficiency as demographics shift is a trick French was deeply familiar with from his years as a consultant assisting with mergers. Speaking to the work of the state board in dealing with these issues, French says, “Honestly, I’ve spent a lot of time with boards over the years. It was really amazing to watch them do what they did, reconciling diverse requirements and the larger responsibility to ensure students had opportunity. I couldn’t have imagined a better group of people to engage in that.”

As a Northeast Kingdom principal in the 1990s, French had his first interaction with the university via the Asian Studies Outreach Program. Professor Juefei Wang, who led the program at the time, found a likely friend and ally in French, who had followed that early interest in Asia into language study in college and service as a Korean linguist in the U.S. Army. With funding from the Freeman Foundation, Wang and colleagues worked to bring Asian studies into schools throughout the state. French was quick to join the cause, helping build connections for his students in Canaan and throughout the state.

Under mentorship from professors Ray Proulx and Judith Aiken, French earned his UVM doctorate in education leadership and policy studies six years ago. His ties to the university remain strong in his state secretary role, building partnerships with Scott Thomas, dean of the College of Education and Social Services, and finding resonance in President Suresh Garimella’s affirmation of the university’s land grant mission.