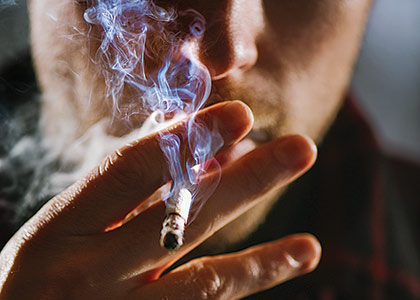 On a hazy June afternoon, Carrie Dyer sits at a picnic table near the playground in Battery Park in Burlington. With one arm she’s holding her three-month-old baby, and with the other she’s sipping water from a bottle. Dyer turns to encourage her seven-year-old daughter who is working her way across the monkey bars. Then she takes another sip of water, brings her baby into a close embrace, and continues talking.

“I started smoking when I was eight years old,” she says, “I was at my dad’s girlfriend’s house and she had older daughters and they were trying to push me into smoking. And I didn’t want to. And I went into the house and told my dad and I was told, ‘Do whatever they want.  You’re getting in my way.’ So that’s how that one happened. And the smoking just stuck.”

Now Dyer is trying to get unstuck. “When I used to work traffic control I was up to four packs a day,” she says. But on January 5, 2014, well into her second trimester of pregnancy, at age thirty-eight, she quit. Her baby—her fourth child—was born in March.

“Well, I’ve pretty much quit,” she says with an unguarded smile. “I’ve slipped up a few times here and there, but I’ve passed all my UAs since I started.”

The “UAs” are urinalysis tests for nicotine. And what she started was participating in a clinical research study at the College of Medicine’s Vermont Center on Behavior and Health, directed by professor and vice-chair of psychiatry Stephen T. Higgins.

“You can think of behavior as a biological system, like respiration or circulation,” Higgins says. “How well could you practice medicine if you ignored circulation? In medicine in the past, and to some extent today, we have left out one whole system—behavior—which needs to be studied as a key part of keeping people well, to understand the source of illnesses, and where you need to intervene.”

Higgins is particularly interested in one kind of behavioral intervention: incentives. For her healthy behavior—not smoking—Carrie Dyer gets paid. A clean urine test means a very tangible reward—cash or vouchers for merchandise.

While the UVM Center on Behavior and Health is relatively new—with $34.7 million in funding awarded in September 2013 from the FDA and the NIH—Steve Higgins’s work on how to improve health through behavior change is not.  Three decades ago, the crack cocaine epidemic was raging in many US cities. In the late-1980s and early-1990s, Higgins led studies on cocaine abuse and dependence that are now landmarks in the field of addiction treatment.  Many other experimental treatments, including a raft of different medications and group therapies, were, “failing miserably,” Higgins says,  “but our trials showed that financial incentives work.”

To this day, there are no FDA-approved medications to treat cocaine addiction, but Higgins and colleagues’ success with retail vouchers as a fundamental part of treatment for cocaine addicts led them to explore how this approach could work with other types of addiction. The Center on Behavior and Health will expand on several decades of research by a large team of UVM scientists that includes fundamental discoveries on the treatment of opiate and tobacco addictions—and how to help especially vulnerable or difficult-to-treat groups like pregnant women, low-income people, and those with co-occuring mental illness.

Higgins, the professor who leads this multi-disciplinary effort, grew up in a tough working-class neighborhood in Philadelphia. He’s the first in his family to have gone to college. He saw heroin epidemics sweep through his community, killing people he knew. He saw the Vietnam vets coming home hooked to painkillers. It’s tempting for a journalist to spin a tidy story of origin about how Higgins chose a career studying behavioral psychology with an aim to treat addictions and other health problems in poor communities—helping people in need.

But he doesn’t exactly see it that way. “We have all kinds of stories about why we do what we do and who knows how accurate they are,” he says. “I grew up around a lot of drug abuse. I know what that looks like,” he says. “But I’m not sure that the issues that I’m interested in now, in terms of health disparities and the influence of socioeconomic status, are driven by that history.”

“I think that we use language in a way that makes us think we’re in charge of things that are really being driven by forces that are external to us,” he says. He understands the trajectory of individual human lives not so much as freely chosen narratives, but as patterns of behavior, driven by our deep evolutionary past. “We are foraging most of the time!  I think we are trying to do the best we can as signals come in saying: go here; go there. And our evolution has made us exquisitely sensitive to certain signals, looking for food, mates, avoiding danger.”

There is overwhelming scientific evidence that while reinforcement evolved to aid survival, it now plays a key role in many behaviors that threaten people’s health. “The substances that people abuse and the fatty and salty foods that are so often over-consumed,” Higgins and three colleagues wrote in a 2012 paper in the journal Preventive Medicine, “share a common effect of directly stimulating the dopamine-based mesolimbic brain reward centers, which directly increases the likelihood that these same activities will be repeated in the future.”

And it’s that same part of the brain that responds chemically to cash or a voucher, rewards that can make a small difference in an individual’s standard of living—helping to pay the electric bill or buy a tank of gas—but, much more importantly, could help save a life through healthier behavior.

Most people who survive a heart attack could benefit from rehabilitation. A program of education and exercise increases quality of life and decreases chances of dying from heart disease—but less than 35 percent of eligible patients participate in rehab programs. And a vanishingly small number of cardiac patients from marginalized parts of society—low-income or homeless or with substance abuse histories—even start.

Psychologist Diann Gaalema and Dr. Philip Ades, a cardiologist, are working to reach these particularly vulnerable populations through a cardiac rehabilitation study built upon the same incentive-based techniques that Professor Stephen Higgins and colleagues have used to treat addiction.

“The reality is that if you’ve had a heart attack you are going to have to change the way you live, and that change will need to be life long,” Gaalema says. She points out that even the four months of a cardiac rehab program can be a long and difficult time for patients to maintain their new behavior. “The idea behind incentives is that it breaks down these difficult behaviors into small, achievable chunks. Putting the focus on what they can do and achieve today helps people take these intermediary steps toward the longer goals they’ll need to meet. It really is a form of treatment and much more subtle than just paying people to do healthy things,” she says.

The new study looks promising. “We’re seeing more minorities and many other people we’ve never seen in rehab before—unemployed people, drug addicts, homeless,” Ades says. Often invisible to the medical system, until they hit the emergency room with very expensive problems, they tend to be “higher risk than the other cardiac patients we see: they have worse cardiac behaviors, exercise less, smoke more, tend to be more overweight,” Ades says. “They are the people we need to reach.”