Catamount Lax on the Rise 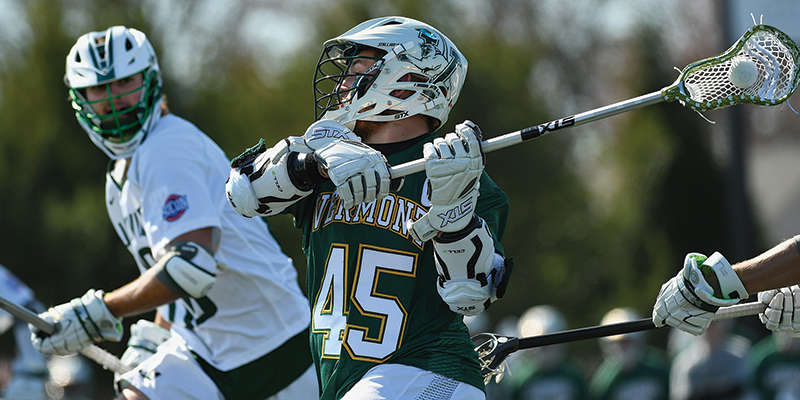 Life was good for Chris Feifs in the spring of 2016. He had helped lead the University of North Carolina to a national championship as its defensive coordinator just down Tobacco Road from where he grew up and played high school lacrosse in Durham. Leaving friends and family and a team poised to repeat as national champions was the furthest thing from his mind.

Then seven Division I head coaching jobs opened up, and Feifs, a college star himself at the University of Maryland, felt compelled to at least look into the possibilities. His only criterion: “That it was a place I thought we could win a national championship.” Conventional wisdom would have eliminated UVM from the conversation since it had never even qualified for an NCAA tournament. But a last-minute trip to Burlington on a sunny summer day in June convinced Feifs otherwise.

“I knew right away that this place could be special and felt confident that I could convince other people to see what I saw,” says Feifs. “I can sell it if I believe in it—and I did right away. UVM has a great academic profile, it’s the closest Division I lacrosse team to the Canadian border for recruiting, and it’s one of most beautiful college settings in America. I wouldn’t have left a national championship contender if I felt like I couldn’t compete for another one somewhere else. Lacrosse just fits here. This place is ripe for success.”

Two seasons into his tenure, Feifs is looking prophetic. UVM opened the 2018 season with a school record seven-straight wins and a first-ever national ranking at No. 12. Their 12-4 mark at season’s end included a one-point loss to perennial power Virginia and a trip to the America East Championship game where they fell to Albany, ranked No. 4 in the country at the time.

A major reason for the team’s success has been the performance of senior scoring machine Ian MacKay, who surpassed Craig Mygatt ’88 for the Catamount career record for goals, notching 150.

“Ian has molded himself into an elite-level player who would start on any top five team in the country,” says Feifs. “He’s a dynamic, game-changing player.”

In some ways, the odds of MacKay coming to UVM were as improbable as Feifs’s. Growing up in tiny Port Elgin, Ontario (pop. 7,862)—home to the largest nuclear generation station in the world, where most of his friends went to work after high school—MacKay dreamt of following in the footsteps of the four hockey players from his hometown who made it to the NHL. But a breakout performance at a lacrosse showcase spurred recruiting calls from the likes of lacrosse power Syracuse and other top programs.

Fortunately for UVM, it was the only Division I school to offer MacKay a scholarship prior to his all-star performance. “I wanted to remain loyal to UVM,” says MacKay, picked thirteenth by the Chesapeake Bayhawks in the 2018 National Lacrosse League draft.

After two successful years under head coach Ryan Curtis, MacKay suffered a season-ending foot injury not long after Feifs’s arrival. The setback resulted in a lackluster 5-8 season, but allowed MacKay, as well as the rest of the team, to adjust to a new system and address some needed changes in team culture.

“It turned out to be a blessing in disguise, because it gave me time to reevaluate my own goals and also what we wanted to become as a team,” says MacKay, who along with teammates Rob Hudson, Liam Limoges, Dawes Milchling, and Ben French have made UVM one of most prolific offenses in the country. MacKay and fellow co-captain James Leary, who spearheaded one of the nation’s stingiest defenses along with Andrew Simeon, Warren Jeffrey, and goalie Nick Washuta, met with teammates to identify ways to become better lacrosse players, and perhaps more importantly, better members of the campus and local community.

“From a cultural standpoint, we wanted to make some on-the-field changes, but also things away from lacrosse like trying to contribute to society through community service,” says Leary, a 2017 America East Helping Hands team selection for his contributions to the local community. “Our team understands that there are a lot of people who are less fortunate than us and realize the importance of giving back. It has brought us closer together as a team, which I think is a big reason for our success on the field.”

“There’s such a negative perception of male lacrosse players right now in our society and we want to change that,” says Feifs, whose team posted an all-time-high GPA of 3.2 in the fall. “I want to use our influence in a positive way and show that we are valuable members of the community. Lacrosse is beautiful game, it’s a sharing game, it’s about giving back. I want to make sure we honor it every time we play it on the field, but also off it by being good members of the community.”

Thanks to all who participated in helping rally this critical support for our Catamount athletes.