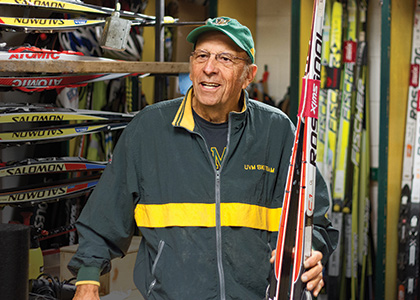 Spend a morning on Lake Champlain visiting Juniper Island aboard Fred Fayette’s research vessel, the Neptune, and you’ll learn something from the man at the helm. Like how sonar works, some of the curiosities that lie on the bottom of Lake Champlain, and the date (October 10, 1776) Benedict Arnold and fleet sailed north past Juniper to meet the British attack.

It’s a fair bet that a number of UVM’s top-flight Nordic skiers across the past four decades have absorbed some of those same facts from Fayette, a Class of 1969 alumnus of the ski program and longtime volunteer coach with the team. Both savvy advisor and beloved uncle to skiers across generations, Fayette is a man with a lively mind and a warm spirit.

While his ski waxing wisdom may have helped athletes kick and glide to NCAA Championships, or split times called out on a frigid morning along the race course at Trapp’s served as a valuable gauge of their efforts, most skiers take away deeper memories of Fayette.

Fred Fayette’s own career as a Nordic skier began somewhat reluctantly. When the South Burlington native enrolled at UVM, after serving in the U.S. Navy’s Fleet Air Reconnaissance Squadron, he joined legendary coach Archie Post’s cross-country team. Fayette would add another sport when ski coach Bob Stone recruited some of Post’s fit harriers in the hope of building his Nordic ranks.

Problem was, Fayette really wanted to ski alpine. A deal was struck. If Fayette and some of his fellow runners would attend the pre-season Nordic camp, then they would also get a tryout for the alpine team. Smiling at the memory, Fayette recounts when alpine coach Hermann Muckenschnabl watched him ski down the mountain around gates then, with thick Austrian accent, said, “Well, Fayette, you turn OK one way.”

With those words, a Catamount Nordic skier was born.

There’s no sport like cross-country ski racing for wringing an athlete dry. Fayette and his fellow-convert runners soon fell in  love with it. “That feeling of being exhausted, but a good exhaustion,” he says.

The bonds built training and racing lasted long beyond graduation. Mention the name of an old teammate like Perry Bland ’71 or Dave Hosmer ’66, and Fayette will feign a hazy memory of this person of whom you speak, before cracking a smile and launching into their virtues. It was Bland, during his years as UVM Nordic coach, who first brought Fayette into the coaching fold. Bland’s pitch, as Fayette remembers it, centered around road trips to ski carnivals and the opportunity to share coffee, donuts, and conversation.

Fayette signed on and has never looked back. Though there have been offers through the years to formalize his coaching status beyond volunteer, he declined. There has always been something else going on in his life—running the Marble Island Resort he used to own with his brother David or the scientific exploration of the lake he’s conducted aboard the Neptune with his business Juniper Research.

Lake Champlain has always been at the center of Fayette’s life. As a kid, he remembers wondering what was on the lake’s bottom; as an adult, he and colleagues used sonar to map the entire bottom of Champlain. Juniper Island, which Fayette’s father bought from the U.S. government for $7,000 in 1956, has long been a gathering spot for the large extended family.

The same MacGyver-like ingenuity that Fayette brought to designing an underwater camera and other lake research efforts has guided projects for UVM Skiing, such as crafting a device to determine the exact kick zone on a ski or a hot box to optimize waxing. But when you speak with Catamount athletes about Fayette, they seldom want to talk about technical matters of skiing so much as, well, the Fredness of Fred.

Knut Nystad ’94, chief of service for the Norwegian national team, cites Fayette’s rare gift for being equally adept at storytelling and listening. “Fred is a walking Wikipedia with facts and tidbits about everything (and nothing) worth discussing,” Nystad says. “Thanks to his patience it was possible to have great discussions with us stubborn foreigners about culture, politics, finance, economics, and other fun subjects.”

Dave Stewart ’00, a former assistant with the UVM team and now head Nordic coach at the University of Denver, recalls the freewheeling discussions—“always with an open mind and always forcing me to question my own ideas”—as he sat shotgun next to Fayette on the drives to races. Stewart continues, “I get to talk with Fred once or twice a year, and he so often amazes me by recalling some minor personal triumph or special moment from my years on the team. If we are judged by how we make others feel, Fred has no equal.”

Fayette’s fans aren’t limited to UVM skiers. Athletes throughout the Eastern ski circuit have felt his influence. Last year, Middlebury College skier Stella Holt created a video that featured Fayette and the lessons she has drawn from him. (Watch: go.uvm.edu/fred)

Fayette is generous with his encouragement along a race course, regardless of the colors the skier is wearing. He recalls a few years back when the UVM and Dartmouth women traded off wins in the Eastern Carnivals, then combined to take places one through six at the NCAA Championships. Faster competition makes for faster skiers. “It helps us all in the long run,” Fayette says.

That close Nordic community, which transcends team, is a large part of what drives Fayette’s years of volunteer coaching. He admits to some embarrassment at having a spotlight on his own work, and talks instead of what his years with UVM Skiing have brought him. Top of the list: meeting his wife, Susan, at ski races in Craftsbury.

“It is such a great joy for me,” Fayette says. “This enriches my life—all the wonderful kids and coaches I’ve been able to spend time with.”