Behind the bombs and bullets

An ordinary life in Kabul 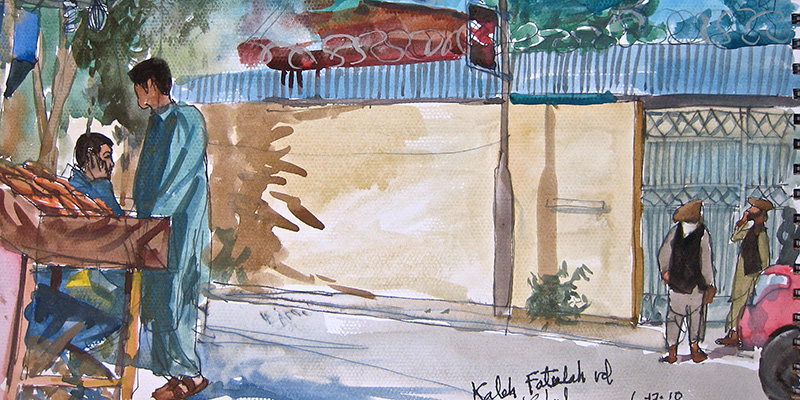 Taverna du Liban represented the new Afghanistan. It was a place where foreigners relaxed and the newly free and wealthy class of Afghans spent their evenings. The owner was, by all accounts, a fantastic fellow who treated every patron like a dear friend. No wonder the place was always packed on Friday nights. No wonder it was targeted by the Taliban.

I felt relatively safe during my six months in Afghanistan, as have most foreigners living in Kabul the past few years. I took few risks and spent most of my time hard at work volunteering as a science teacher and director of academics at the School of Leadership, Afghanistan (SOLA). Other expats I know walk the city alone and hail local taxis without a hint of fear.

Taverna du Liban was the sort of place that folks of all sorts felt safe. It was on a police-patrolled street in Wazir Akbar Khan that is closed to unauthorized vehicles and guarded at the ends by police posts. Past the barricades sits a quiet street lined with steel doors.  Behind each sit guards with automatic weapons. On January 16, 2014 I happily dined at a restaurant just a few doors down from the Taverna.

On January 17, 2014 that sense of security was viciously violated when the Taliban carried out a precisely executed attack on the Taverna. After sneaking past police patrols one attacker blew the door with a suicide bomb and two others rushed in guns chattering. The killing went on till the police responded and shot the attackers. Among the twenty-one dead were thirteen expat civilians. These were people who were here not to fight a war, but to build a nation.

The evening of the attack, I was moderating a discussion between a human rights expert and our students. Just like in my science classes the students were fired up and full of questions for the guest speakers. In the United States, even at the college level, teachers have to deal with bored, disengaged students. At SOLA that has never been a challenge. The girls’ endless hunger to learn makes teaching them easy and fulfilling. The Afghan education system is still vastly inadequate, but efforts like SOLA make a huge difference on an individual basis. Its students are primed to become strong leaders for their country. One fourteen-year-old girl already has a plan mapped out for founding Afghanistan’s first steel factory.

The day after the Taverna attack I learned that my students’ exuberant passion for learning probably saved my life. The school’s president had planned to take us to the Taverna that night, but abandoned the plan when the human rights discussion went overtime.

The Taverna is not the last time I experienced proximity to unfathomable tragedy. In my last two weeks in Kabul, the Taliban made good on their promise to disrupt the elections. Bombs went off in my neighborhood and gunfire ripped the air every few days and finally daily in the lead up to my departure on March 30.
These events never changed my comfort level or outlook. This may sound strange. You know what? I think it’s incredibly strange. On face, it makes sense the Taliban would attack a restaurant filled with expats and Afghans who accept their presence. This is an important year for Afghanistan with the elections and the NATO force drawdown looming on the horizon. The Taverna massacre was a statement from the Taliban in this time of change. Their goal was to say no foreigner is safe in Kabul even now while the soldiers are still here. The now daily violence leading up to the elections on a myriad of targets further cements that message.

When I read about the attacks of the last few months and references to past attacks, I realize that such assaults are new territory for the Taliban. All the bombings for a good while before the Taverna were on embassies, NATO- controlled bases, and the like.  In other words: symbols of Western power in Afghanistan. These places are heavily fortified, and bombings rarely rack up a body count. The Taverna was the first time in ages that an establishment of civilian life was attacked.

This increasingly bloody spring exhibits the fearsome capabilities of the Taliban, but it also exposes them as the gang of thugs that they are. They have shown they are happy to attack places of recreation enjoyed by Afghan and foreign civilians alike. These are not the acts of a coming revolution; they are the acts of desperate ruffians carrying out their own agenda. I have found the Afghan people to be just as distraught over the massacres as the global community if not more.

This brings me back to the strangeness of my lack of fear. I realized a few nights after the Taverna attack why I am not afraid. Just days after the attack I watched SOLA students and staff dressed to the nines fill taxis on their way to my colleague’s wedding. When they returned, the kids were delirious with the joy of celebration, the memory of a brutal massacre of civilians just six days earlier the furthest thing from their minds.

My students are just kids, and despite the violence that passes on occasion, they’re just living their lives the way any kid would. They go to school, they study, they have dreams, they play games, they laugh, they cry, they sing and dance. Make a video of their daily life and place it next to that of a kid in Vermont and the differences will be geographic, not substantive.

When you live in Kabul and meet the shopkeepers, the students with their unbridled love of learning, the expats and Afghans who spend each day working to improve justice, education, public services, and industry, you realize there are too many people that love their freedom for the Taliban to reconquer this nation. Some provinces may be a different story, but in this city the populace rousingly rejects the violent minority that is the Taliban. They are now but criminals pursuing their own fanatical interests while something like normalcy plods along each day. While complacency would be folly with such a potent source of conflict in this society’s midst, I think every Kabulian is well within their right to dream of a bright future so long as they are willing to work towards achieving it. The hundreds-long queue of people waiting for election registration cards each day amidst the ongoing attacks suggest they are.

Some are disappointed that the presidential election on April 5 resulted in the need for a runoff election. True, another round of elections postpones the transition and will cost significant resources to secure, but I think the elections were quite successful. Despite a bloody March, 58 percent of eligible Afghans voted, and there were no major terrorist attacks on the day. The next day people were in the streets thanking their police and soldiers for a peaceful election. Kids who normally play-act gun battles on the street instead played mock voting games. If the results dictate a runoff, so be it—the people will vote, and the security forces have shown their competency.

The statistics and sensational news articles paint an increasingly scary picture of life in Kabul. The thing is, our minds aren’t structured to respond viscerally to numbers on a page. Even though I am not numb to the images of misery I see in news reports and Facebook updates, they were not the cornerstone of my life in Kabul. Every Afghan I met is dedicated to building a better future and welcomed me with open arms. My students continue to inspire me with eagerness and resiliency that is far beyond their ages. Fear is relegated to the back of one’s mind when surrounded by so much good.