A Battle for Ant Sperm 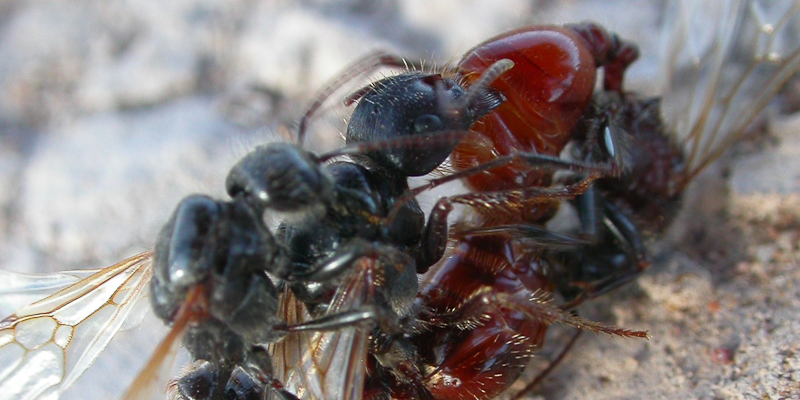 And you thought the sexual battles between people could get weird and fierce? Try ants. In a new study, biologists at the University of Vermont have discovered some queen ants that make sexual bondage into a life and death fight.

In a discovery new to science, their research shows that sexual conflict between two species can drive an evolutionary bedroom-battle royal, leading to competing adaptations in which female ants of one species manage to manhandle sperm away from the unwitting males of a different species during intercourse. The study was published in the Oct. 29 online edition of the Proceedings of the Royal Society B.

In the desert along the Arizona/New Mexico border, the scientists observed mating between two species of Pogonomyrmex harvester ants that are known to hybridize. The queens of both species will happily mate with males of the other species. But these queens have a trick in their antly boudoir: they only use this sperm from the other species to produce sterile worker ants that they need to build their colonies.

This, as you might imagine, isn’t what the male ants are hoping will happen with their precious seed. Sure, these males will produce lots of daughters via this queen, but these daughters will be sterile and “so they’ll have no grandchildren,” says Sara Helms Cahan, professor of biology who co-led the study with her graduate student and lead author Michael Herrmann.

Sterile offspring are directly contrary to the males’ long-term evolutionary interest in passing on their genes. So why do these males agree to hook up with these queens in the first place? In the field studies, Herrmann observed that the males — in the once-a-year mad scrum of competitive mating that these harvester ants exhibit following summer monsoon rains — didn’t seem able to distinguish queens of their own species from queens of the other species. That is, they couldn’t tell them apart until they began to copulate.

Then — perhaps a bit like other dawnings of awareness among males of a well-known species in the middle of the sex act — the male ants figure out they’ve made a big mistake. Realizing that they have mated with the wrong species, they get clever, and reduce the rate at which they transfer their sperm into these crosstown queens. “They can mate again,” Helms Cahan explains, “so this would preserve their sperm for investment into better mating.”

But the queens will not be jilted so easily. They have evolved another trick to counteract the males’ strategy: hold on and don’t let go. “They lock slow males in copula significantly longer,” says Helms Cahan, “until they eventually deliver the same amount of sperm that they normally would have.” Score one for the queens.

“Essentially, they are sperm parasites,” she says.

The new ant study is a “rather unusual R-rated example,” Helms Cahan says, of a larger biological phenomenon called the Red Queen hypothesis. Like the Red Queen in Alice in Wonderland — who says, “you see, it takes all the running you can do, to keep in the same place” — the theory proposes that many plants and animals must constantly adapt and evolve not just to gain reproductive advantage but also to simply avoid extinction when competing against opposing, and also-evolving, organisms in the endless shifting of life.

“In this harvester ant system there really needs to be some sort of stalemate,” Herrmann explains, “because if the males actually were able to tell what type of female they were mating with, they would cut off the sperm to the queens that need it.” Then the system would collapse because these queens have evolved to only be able to produce workers with sperm of the other species, but not their own.

There is “a conflict of interests,” the scientists write in the journal article “as queens must mate with both lineages to produce both daughter queens and the workforce to care for them, but males gain fitness returns only by mating with queens of their own lineage.” For both species' populations to prevent collapse, the battle of the sexes must continue with neither queens nor males gaining too many evolutionary advantages.

The new study is also a powerful illustration of the fact that in the wider biological world, “females are not just passive players in reproduction,” Helms Cahan says. “They have their own distinct evolutionary interests and are just as capable of imposing those interests on their partners when conditions warrant.” 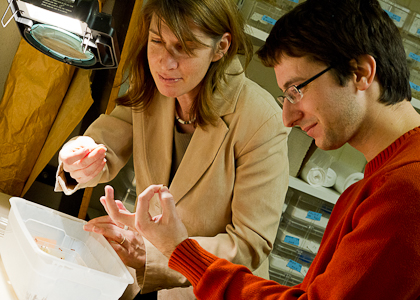