Local wheat on the rise in Vermont 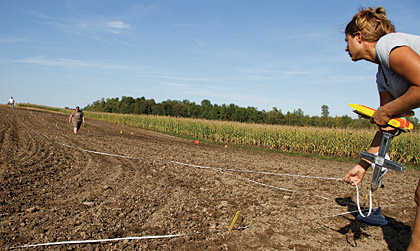 Heather Darby at work on the Borderview Farm in Alburgh, Vermont. Photo by Joshua Brown

Heather Darby runs her finger down the packets of wheat seed like a librarian scanning her collection. Each has a handwritten label: Redeemer, Forward, Harvard, Clark’s Cream, Gold Coin. Darby, a professor of agronomy with UVM Extension, is preparing a planting of winter wheat on Roger Rainville’s Borderview Farm in Alburgh, Vermont. Dozens of red and yellow sticks cover the plowed field, marking where each variety will grow. “Modern-day varieties on one end,” says Darby, “and heirloom varieties on the other.”

They have seeds from all over the world, including Siberia and Idaho. They want to see which ones will stand up well to New England’s unique brew of cold winters, diseases, high humidity, and rocky soils. In the nineteenth century, Vermont grew 40,000 acres of wheat, but that dropped to nearly zero over the last century, as the soils, railroads, and climate of the Midwest triumphed in the intense competition of grain commodity markets.

“Industry came in and said, ‘We can’t do that here,’” Rainville says. “Guess what? Now we’re doing it again!”

Darby began researching the viability of growing wheat in Vermont in 2004. Four years ago, she and Rainville began trials with organic spring and winter wheat varieties on his farm. They, like farmers across the state, had very successful results with wheat in 2010.

“But this has been a crazy year,” Darby says, shaking her head and laughing. “It went from drought, to too much wet, to a hurricane. We’re really not sure what’s going to happen next.”

And a similar sense of uncertainty seems to be one of the major reasons why consumers have shown an increasing interest in getting food—including their daily bread—grown close to home by farmers they know. Darby points to a rash of recent food safety problems in the global food system, climate change, worries about energy supplies, and skyrocketing commodities prices as part of the changing food landscape.

“People want some control of their food and they want to be connected,” Darby says, “The localvore thing is moving beyond the gourmet foodie market—it’s now about knowing where your food came from.”

Vermont has the highest per capita spending on local foods of any state, according to USDA figures, and that desire to eat local has increasingly come to include bread. Until very recently, however, few bakers were willing to incorporate Vermont-grown wheat in their products, complaining of low quality and limited supply—which is why Darby and Rainville are out planting today, looking for varieties that not only will survive in Vermont but produce flour with the protein levels, gluten strength, and taste that bakers demand.

“When the farmers, bakers, millers, and Extension actually started listening to each other, things really took off,” Darby says. “We soon realized that we needed to improve quality.”

To help, Darby opened a cereal grain quality laboratory in UVM’s Jeffords Hall. There, she and her team test wheat samples from farmers on a sophisticated machine that measures what millers and bakers call “falling number.” If it rains just before harvest, or wheat contains too much moisture, it may start to sprout. This releases an enzyme that starts breaking down the starch and protein in the grain—which results in off-flavored flour and weak dough.

Randy George—one of the pioneers in baking bread from local wheat and the co-owner of Red Hen Bakery in Middlesex—started as a skeptic. Some of the Vermont flours he had gotten in earlier years were passable, he says, but he had to mix them with at least eighty percent Midwestern flours to get the dough and taste he needed.

George credits Heather Darby for what happened next. “There were a lot of good intentions, but we were bumbling around in the dark until she got the farmers and bakers together,” he says, “and soon we saw dramatic improvements in quality.” Local farm tours, a trip to Denmark, visits with millers and agronomists in Quebec, and other education spearheaded by Darby helped farmers to understand better the subtle issues that determine wheat quality, including harvest timing, drying techniques, and variety selection. The result: flours with higher falling numbers and better protein levels.

In the fall of 2009, George bought batches of flour from Nitty Gritty Grains in Charlotte and from Gleason Grains in Bridport  and  began “making bread that is beyond my wildest dreams of what we could do with an indigenous Vermont bread.” Soon, Red Hen was selling a hundred loaves a day of their purely Vermont-wheat Cyrus Pringle bread, named in honor of UVM’s nineteenth-century botanist and wheat breeder.

With funding from the USDA’s organic research program, Darby now employs nine technicians and other staff on her research program—and is following in the long-abandoned footsteps of Cyrus Pringle.

Last June, on a tour of research plots she is running with Ben Gleason at Gleason Grains, Darby described her goal of bringing some of Pringle’s genius back to life.

“Champlain is a wheat variety Cyrus Pringle developed right here in this area,” she said, pointing to a small plot of electric-green wheat, blowing in the wind. “We’ve crossed it with a popular modern variety from Canada, A.C. Barrie.”

“We’re hoping to release it next year or the year after,” she says. “We’re at the point now where we’re growing out seed—where we can evaluate quality and yield and start to do some baking trials.”

And, at Borderview Farm, Darby would like to do the same with winter wheat: find the best varieties available and, eventually, breed them together to make new wheat stock that will do well in Vermont. But part of the challenge is that each year is different, and 2011 has been tough.

“The farmers are getting the same quality as last year, but yields are way down,” says baker Randy George. “The fact of the matter is that we get most of our wheat from Kansas.” And he’s not getting as much Vermont flour as he’d like.

“We need to grow this niche industry, so we can guarantee that there will be enough supply of local wheat every year,” he says.

Which is why Roger Rainville—who has been farming here for twenty-nine years and now has given over his entire 235-acre farm to testing and trialing many crops with Darby—starts the tractor rumbling down the field. “We’ve got work to do,” he says.

Riding behind, Heather Darby methodically opens the paper envelopes and pours their contents—wheat berries from around the world—into the spinning cone seeder that drops them down a plastic hose and drills them into the Vermont soil.