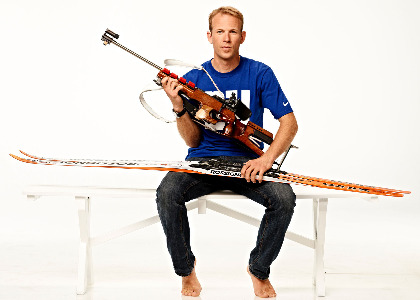 How does Olympic athlete and UVM alumnus Lowell Bailey handle the pressure of high-stakes competition? By tuning out distraction. "I'm 100 percent present in the moment," he says. (Photo courtesy of NBC Olympics / USOC)

Among all the sports in which precision battles tension, golf comes immediately to mind. Tiger Woods stands over a thirty-foot putt at the final hole of a major tournament, championship riding on the stroke, a hushed gallery of thousands circling the green. Incredibly difficult, right? Now let’s make Tiger sprint up the fairway rather than walk; get his heart pounding to 180bpm; encourage the hoards of genteel golf fans to scream all they like; add some heavy snowfall; and, finally, dispense with the endless angle analysis and caddie counsel and, without pause, just putt the damn ball.

No disrespect, golfers. But winter biathlon, which combines Nordic skiing and target shooting, takes it to a different level on the grace-under-pressure gauge. UVM alumnus Lowell Bailey ’05, is among the world’s elite in this event and will compete for the United States in his third Olympics when the games get under way in Sochi, Russia, in February.

While biathlon is a relatively obscure sport in the United States, that’s far from the case in the 2014 Olympics’ host country or throughout much of Europe. At World Cup races, crowds of forty-thousand will fill the stadiums where athletes loop in to shoot, and the European television audiences rival the numbers who watch the NBA Finals in the United States. While acknowledging some bias, Bailey says that’s all due to biathlon being a deeply dramatic sport with its combo of red-line endurance racing and precision performance.

As he prepared for the upcoming Games in Sochi, Bailey found time in his “train, eat, sleep” cycle for a phone interview, speaking from the biathlon team’s training base camp in Soldier Hollow, Utah, about the athlete’s life and the Olympic experience.

Looking back at the Torino Games in 2006, Bailey says he was simply thrilled to be there, the fulfillment of a dream he’d held nearly from the moment he first clicked into a pair of cross-country ski bindings in his native Adirondacks. Vancouver 2010 was a very different story. Bailey and his biathlon teammates came in with high hopes, and plenty of self-heaped pressure, for the United States’ first Olympic medal in the sport. That didn’t happen.

One race, in particular, from Vancouver sticks with Bailey as the most memorable of his career. For two years, Bailey had zeroed his focus on the 10-kilometer sprint. For two years, he knew the date of the race, Feb. 14, 2010. But no amount of training and preparation can control the weather. An isolated squall of heavy, wet snow fell on the Nordic venue as Bailey skied his loops. In a 25-minute race, typically decided by hundredths of seconds, Bailey and the other skiers with the misfortune to draw a start time during the storm were essentially saddled with a three-minute handicap as they slogged out their races.

“I didn’t come away with the results that I wanted, but after some space, after some time had passed after the Vancouver Games I was able to realize I had learned an awful lot about what biathlon meant to me, why I was doing the sport, how to carry myself in the face of certain distractions and pressures,” Bailey says. “I think it was extremely humbling in a lot of respects, but it really helped me progress and move on and grow as an athlete, and I’ve used those skills the last four years to get where I am now.”

Bailey is now among the top ranks internationally. While a medal was, perhaps, a longshot’s dream in Vancouver, it’s now a real possibility for an athlete who has ranked among the top fifteen in the world and finished just off the podium several times in World Cup races. (World Cup races are actually more competitive than the Olympics since the number of athletes competing from powers such as Norway, Germany, and Russia are limited in the Games.)

On the November day he spoke from Utah, Bailey was resting after a morning workout that consisted of about sixty kilometers of roller skiing at the Soldier Hollow Nordic facility. Training wasn’t over for the day; a several-hour bike ride was on the agenda for the afternoon. Mental training is also an essential part of the biathletes’ regimen, Bailey says. A sports psychologist regularly works with the team to help them develop strategies to handle the race’s pivotal moment — “those 22 to 26 seconds, the point at which you drop your poles and you’re on the mat. To the point where you pick those poles up again and exit the range,” Bailey says.

Athletes need to find what works for them under the circumstances, Bailey says. For him, key words help realign his focus. “I’m 100 percent present in the moment, nowhere else but in the process of shooting. I’m not thinking, ‘well, if I hit these targets then I’ll be in first place’ or ‘man, there’s a lot of people here’ or whatever distraction it is.”

Bailey is a talented musician — guitar, mandolin, singer, songwriter — who picked up his skills and passion from his family. His guitar is nearly as essential to his travels on the World Cup circuit as his skis, boots and poles. Watching video of Bailey playing bluegrass runs suggests his speed and focus as a musician might link up with that same facility as a biathlete. It’s a question he’s heard before.

“There is a certain parallel,” Bailey says, “a feeling of complete synergy in your body with regard to skiing, with regard to shooting, and also with regard to playing an instrument. There’s a lot of times you know it’s happened because five or ten minutes have gone by, and, you know, you sort of come out of it and think, ‘oh, I don’t know where that time just went.’”

Bailey will be hoping he hits one of those “flow” days in Sochi, where the multi-event biathlon discipline means he could be in as many as six races that stretch throughout the Games. Regardless of whether the U.S. breakthrough medal comes from him, one of his teammates, or in a future Olympics, Bailey is sure it’s coming soon.

“We’ve proven we can be competitive with the world’s best. We used to just concede that Germany and Norway and Russia are powerhouses, and that’s just the way it’s going to be,” Bailey says. “But we’ve shown that it is possible to recruit athletes, develop biathletes, become internationally viable. We haven’t even scratched the surface yet in terms of potential.”