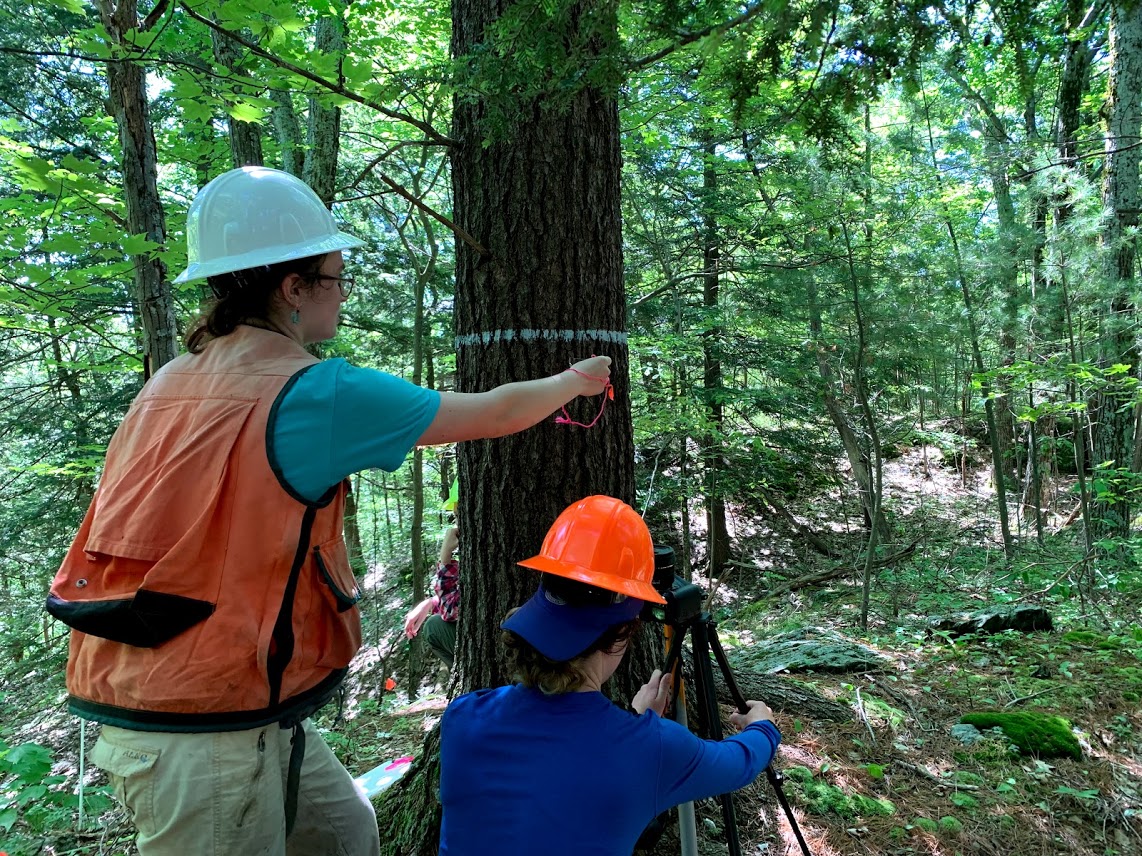 Long-term trends in tree health provide information on the condition and vigor of Vermont’s forests. Assessing tree canopy condition and seedling regeneration help us monitor the status of our forest, as well as detect change. Trees with healthier, denser foliage can sequester more carbon, add more wood annually, and better resist pests and pathogen outbreaks. Measuring regeneration gives us a sense of what our forest may look like in the future. In any one year, crown health metrics may vary due to weather events and/or insect or disease outbreaks. Therefore, the long-term species trends give us context for the annual observations. As our climate continues to change, monitoring forest health trends will be critical. 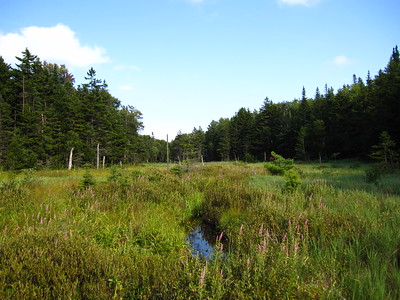 Regeneration counts provide an estimate of the relative success of germination and initial survivorship across species from year to year. Saplings (1 to <5 inches in diameter) have been measured on the 19 original FEMC plots between 1997 and 2007, and then again starting in 2014. From 2008 to 2013, the plots were measured on a 3-year rotation. Seedlings (<1 inch in diameter and greater than 12 inches tall for hardwoods or 6 inches tall for softwoods) have been measured periodically during that time as well. Beginning in 2014, all seedlings of any height have been tallied yearly. Regeneration serves as a proxy for the future composition of the forest canopy. In total, the information obtained from this plot network provides a robust estimate of the current condof Vermont’s forests, providing early indications of potential problems that may affect forests across Vermont and beyond.

The average foliar transparency of tree crowns measured in 2018 was 23%, which was greater than the 2017 average (15%) and the long-term average (20%) (Table 1). Eastern white pine had the highest levels of crown transparency in 2018 (24%) which represents a 10% increase when compared to the long-term trend.

Table 1. Crown health metrics (percent twig dieback, percent foliar transparency, and tree vigor) in 2018 and compared to the long-term mean (1997-2018). Both dieback and transparency are represented as species-specific means. Tree vigor is the percent of poo 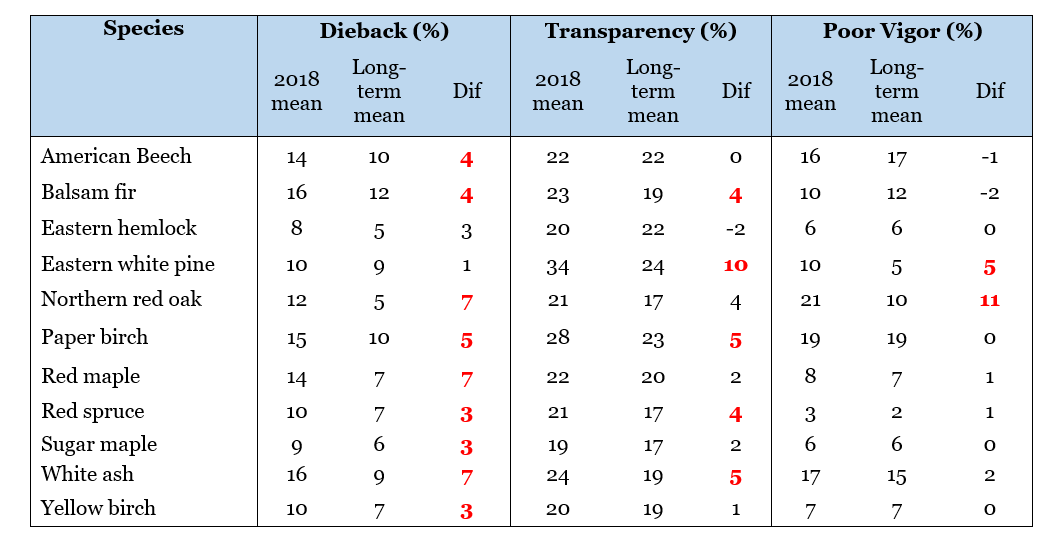 For the 2018 annual report, we have summarized trends in tree vigor, which is an assessment of a tree’s overall health. We compared the proportion of trees that were identified as having poor vigor to all trees assessed in 2018 and for a four-year period when vigor data were collected (2014 to 2018). For the select species listed in Table 1, the proportion of poor vigor trees was 11% in 2018 which is slightly higher than the five-year average of 10%. Northern red oak and eastern white pine showed the greatest increase in proportion of poor vigor trees in 2018 in comparison to the four-year average for those species. While northern red oak and white pine do show a significant increase in poor vigor rating compared to the mean, tree vigor assessments were only conducted on 22 plots in 2014 which likely underrepresents these species. However, the trend over the measurement period does indicate an increasing proportion of poor vigor rating for red oak and white pine. 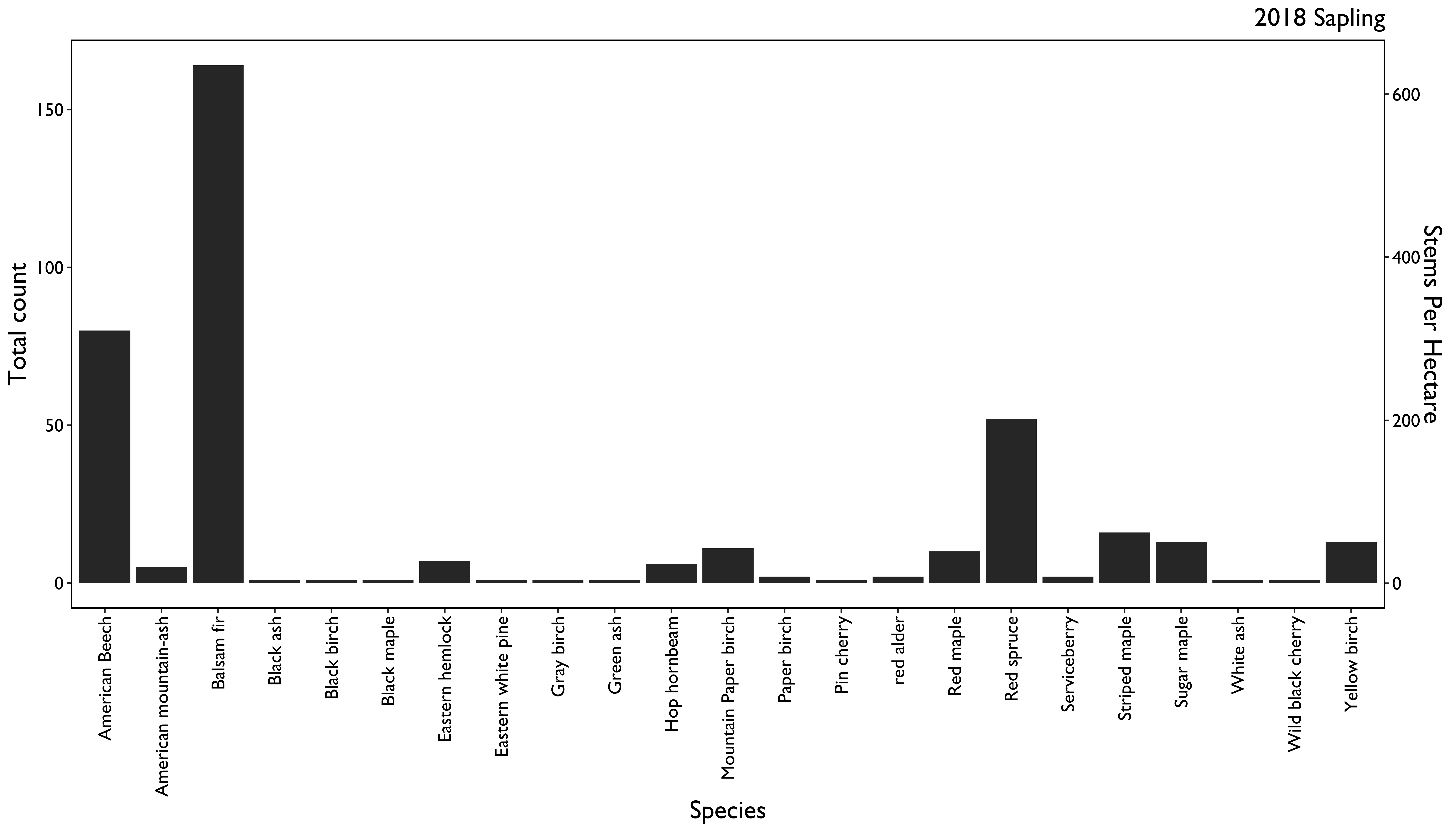 Across the plot network, the sapling layer remained relatively stable over the past year. Balsam fir decreased slightly from the previous year’s measurement of 167 live stems to 164 live stems (635 tph; 257 tpa) (Figure 1).  American beech remained the second most abundant species in the sapling layer with 80 live stems tallied (310 tph; 126 tpa) (Figure 1). Red spruce (52 stems, 201 tph, and 81 tpa), striped maple (16 stems, 62 tph, and 25 tpa), and yellow birch and sugar maple (both with 13 stems, 50 tph, and 20 tpa) are among the most abundant species in the sapling layer. Together, these results indicate little change in sapling composition in the past year, which is to be expected given the low rates of natural disturbance within the forest types represented and due to the lack of canopy disturbance resulting from forest management. The sapling layer represents those tree species that have the potential of growing into the overstory. We have not seen increased rates of sapling mortality in recent years which does suggest the potential for new trees to be recruited into the overstory if additional growing space is made available.

An examination of the full temporal dataset allows us to look past the year-to-year variability to consider species-specific trends and identify more chronic stress conditions. It is evident that there is a high annual variability in the crown health metrics, and particularly for certain tree species. White ash and paper birch show a trend of increasing foliage transparency over the past ten years compared to the long term average. The total number of trees assessed has increased every year due to the inclusion of additional monitoring plots which may have had an impact on observed trends in crown health metrics. Red oak has experienced a slight increase in crown transparency over the past four years while sugar maple appears to be experiencing a decreasing crown transparency trend (Figure 3). Sugar maple, however, appears to have increasing levels of crown dieback over the past five years (Figure 3). White ash, yellow birch, red maple, paper birch and red oak are all likely experiencing higher than average levels of crown dieback over the past four years (Figure 3).

Tree vigor is a measure of a tree’s overall health. During annual data collection, each tree that is measured is assigned a vigor rating from 1-5, with 5 being dead. A vigor rating of 1 (excellent health), indicates a tree that is in good health with less than 10 percent crown dieback, minimal to no branch mortality, defoliation, or crown discoloration. A tree with a vigor rating of 4 (poor health) indicates that the tree has elevated levels of branch mortality, crown dieback, and more than 50% crown defoliation and/or crown discoloration. To assess the long-term trends in average tree vigor across all plots in the FMH program, we assessed the percent of all live trees that were identified as having poor vigor (vigor rating of 3 or 4) relative to the total number of trees. The proportion of poor vigor trees in the sampling population represents another useful metric to assess changes in overall forest health over time.   Vigor rating began in 2014; therefore, we present the trend from 2014 to 2018.

The proportion of poor vigor trees has remained stable for most species across all monitoring plots over the past five years, with the exception of red oak, which show signs of elevated proportions of poor vigor trees (Figure 4). The increase in white pine trees assessed as “poor vigor” in 2018 may be a result of white pine needle disease which had large impacts in the past two years.

In 2018, overall seedling density was greater than in previous years (Figure 5). It is important to note that a protocol change, implemented in 2014, expanded the definition of seedlings to capture recent germinants. Prior to 2014, seedlings were only counted when they exceeded a certain height (6” for conifers, 12” for hardwoods, as per FIA protocol). Since 2014, all seedlings with true leaves and smaller than 1” diameter were counted. Therefore, we have chosen to present the trends in tree regeneration for the five-year period from 2014 to 2018. 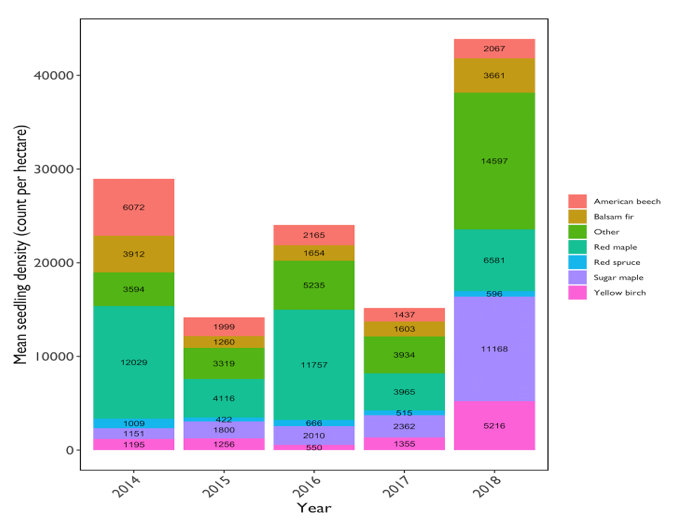 Long-term forest health monitoring has allowed us to detect subtle but steady changes in the condition of our forests. Long-term trends indicate that some species continue to fare better than others. Examination of metrics for other species indicates long-term trends that warrant ongoing monitoring of declining condition, particularly for paper birch, red oak, and white ash.

Forested ecosystems provide immeasurable benefits to society; from their aesthetic beauty and recreational opportunities, to biomass energy and carbon sequestration. While the composition of forests may change over time, ongoing work to monitor tree health and regeneration will inform forest management decisions to maximize forest resiliency, productivity, and health of Vermont’s forests. 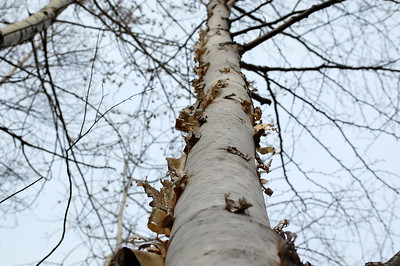 Long-term trends continue to show declining tree crown health for white ash and paper birch, while others species continue to remain stable. 2018 proved to be an impressive year for tree seedling regeneration across Vermont.

Special thanks to Josh Halman from the Vermont Forest Parks and Recreation Department for reviewing and editing the Forest Health Section of the 2018 FEMC Long-Term Monitoring Update.

[1] Eleven tree species were selected for crown health assessments based on their density (trees per hectare) across the FHM plot network.