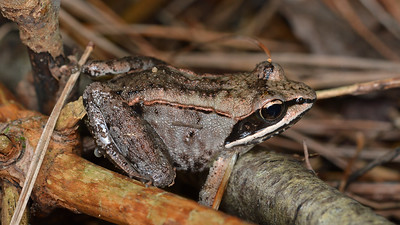 After an initial amphibian survey and establishment of monitoring protocols, populations of amphibian species have been monitored almost annually on Mount Mansfield since 1993.  This monitoring has established baseline information of abundance for the species caught in drift-fences from which trends in abundance over time can be discerned. The monitoring also records changes in number and type of obvious external abnormalities. Amphibians are targeted for this kind of study because their multiple habitat usage and permeable skin make them especially sensitive to changes in environmental conditions and land use patterns.  This is the longest-running set of amphibian monitoring data in New England.

Currently, drift fences are located at two elevations on the west slope of Mt. Mansfield: two at 1200 feet and one at 2200 feet. Amphibians that encounter a fence must turn to one side and most eventually fall into a bucket buried along the fence.  Lids are removed from the buckets in the afternoon when rain is forecast, and the captured amphibians are identified, counted, examined, and released the following day. 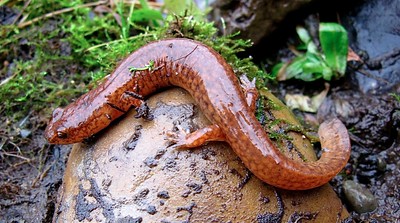 Overall, the total number of salamanders and frogs detected per trapping was considerably lower than last year, but still above the average total number detected over the entire study period.  Numbers were neither the highest nor were they the lowest for any species this year.

Table 7. Monitoring results from drift fences on Mt. Mansfield in 2018. 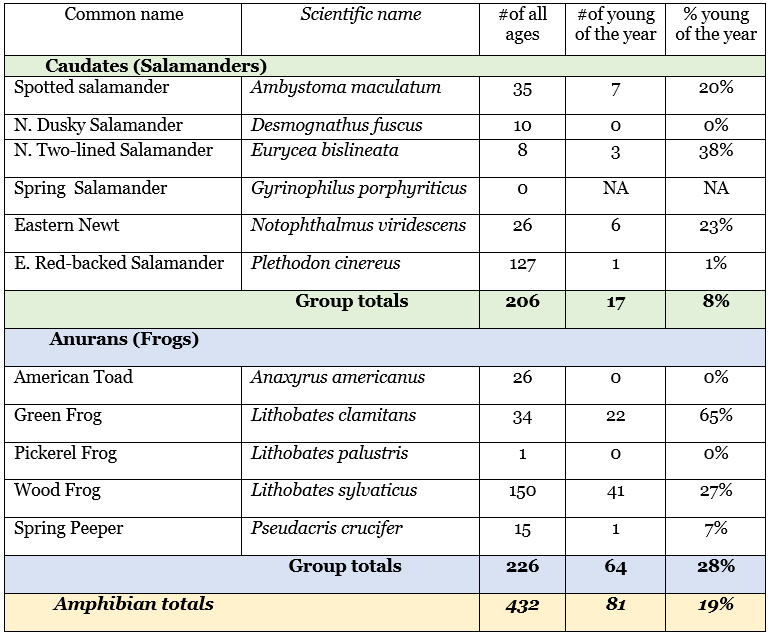 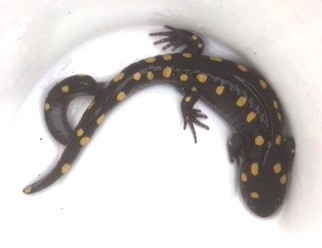 The number of abnormalities continues to be low, with only one abnormality detected in 2018 out of 450 animals captured.  On Oct 12, 2018 a Spotted Salamander was found with an adventitous tail (Figure 265).

The total number of suitable nights to open the drift fence was low in 2018. This resulted in lower total numbers of animals captured relative to 2017.

Populations of Spring Peeper had declined through 2010 (Figure 26). While this species rebounded in 2016 and 2017, 2018 capture numbers were down slightly but still suggest a recovery. Eastern Red-backed Salamander population indices show a continued and dramatic increase over the length of the study while Eastern Newt has declined slightly. Spotted Salamander populations remain fairly stable with a very slight recent increase (Figure 27).

Populations of American Toad, and Wood Frog have increased over the study period. Green Frog populations remain stable, with the exception of 2002 when there was a large increase in the young of the year. 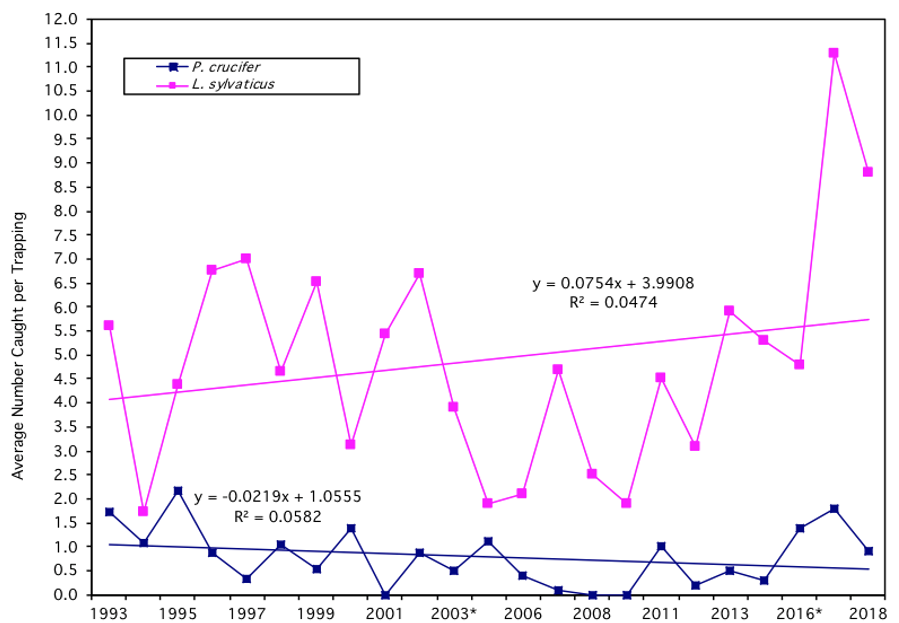 The data collected through amphibian monitoring on Mt. Mansfield and statewide through The Vermont Reptile and Amphibian Atlas have been used to provide conservation information to private individuals, companies, organizations, and governmental units. These data serve as the basis for status and conservation advice to the Vermont Endangered Species Program; management recommendations for biologists from the Green Mountain and Finger Lakes National Forest, private foresters, private landowners, and the Vermont Department of Transportation.  Many species benefit from management and conservation measures for these species. The continuing decline of several species of reptiles and amphibians in Vermont and the apparent extirpation of the Boreal Chorus Frog (Pseudacris maculata) remain a cause for concern.

The long-term decline in Spring Peeper numbers on Mt. Mansfield bottomed out in 2010 and populations appear to be recovering.

Eastern Red-backed Salamanders continue a dramatic increase in numbers on the western slopes of Mt. Mansfield.