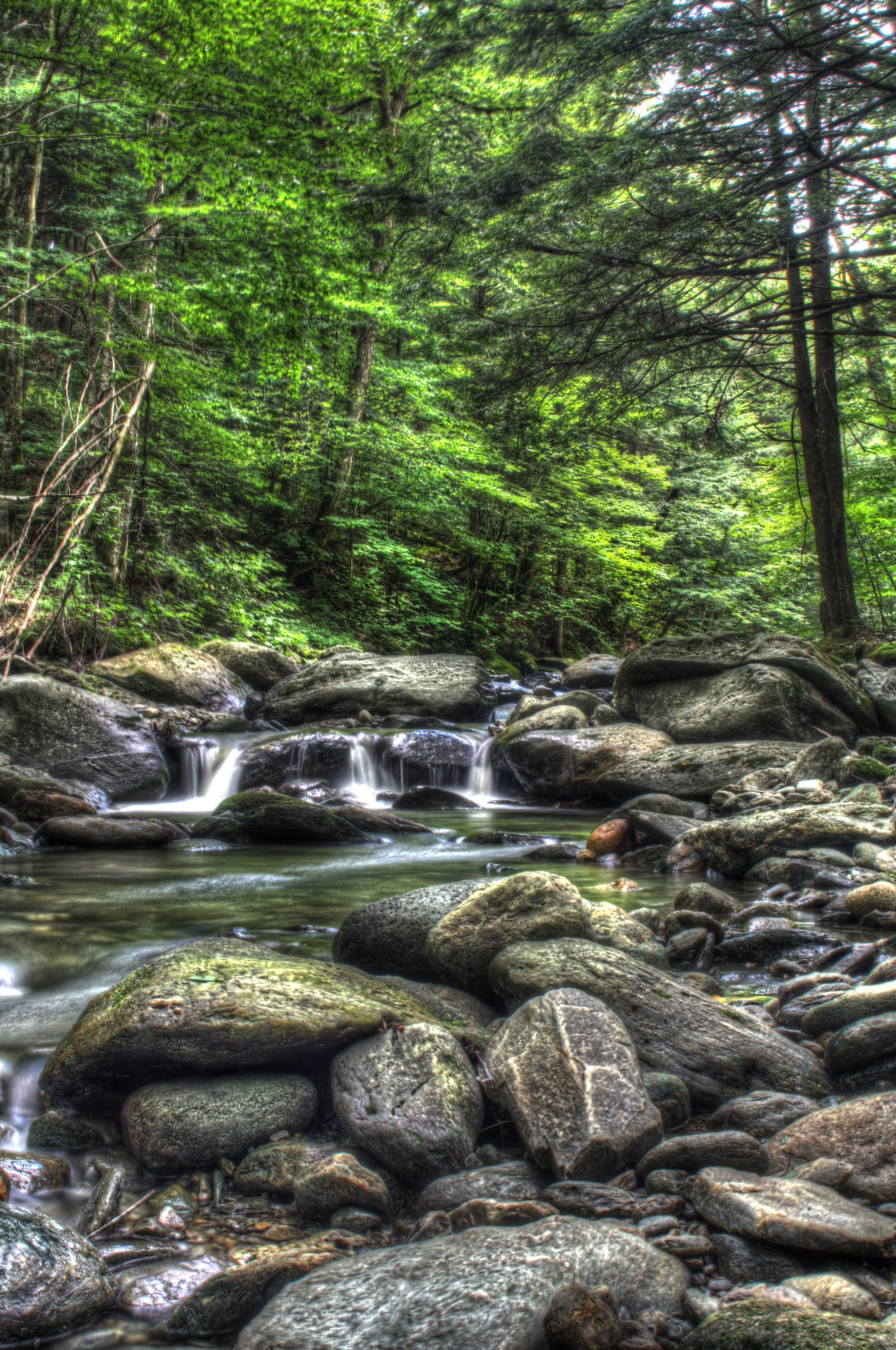 Ranch Brook near Stowe Mountain Resort has been monitored since 2000.

Since September 2000, the U.S. Geological Survey (USGS) has been continuously operating stream gages at Ranch Brook and West Branch near Stowe, Vermont (Wemple et al., 2007). The gaging was designed as a paired watershed study, with Ranch Brook (watershed size 9.6 km2) as the forested control watershed, and West Branch (11.7 km2) as the developed watershed. The West Branch watershed contains nearly the entire extent of the four-season Stowe Mountain Resort. In the classic paired watershed approach, monitoring would have been conducted prior to any development, but the resort was established long before the study began.

However, the resort underwent a significant expansion during the course of the study, so the study design is appropriate to assess the effect of the expansion. This report on the Mt. Mansfield gaging is for Water Year (WY) 2017 (October 1, 2016 through September 30, 2017). The report interprets the WY17 streamflows in the context of the full 17-year record. Historic and near real-time streamflow data are available on the USGS website (links have been provided in the additional resources section follow this report).

In WY17, the gages were jointly funded through a cooperative agreement between the USGS, the Vermont Department of Environmental Conservation and the Forest Ecosystem Monitoring Cooperative (FEMC). The gages provide valuable information on mountain hydrology in Vermont, and how mountain landscapes respond to development and extreme events. To our knowledge, these are still the only gaged watersheds at a ski resort. The gages have supported projects on snow hydrology and water quality by the University of Vermont (UVM), Sterling College, Vermont Agency of Natural Resources, and others. In particular, Beverley Wemple and students at UVM have used the gages as a base for student projects and hands-on learning, and to attract additional funding for value-added research.

Streamflow, also called discharge, is measured in volume per unit time. In the U.S. it is typically measured as cubic feet per second, or cfs (Figure 30). Throughout this report, we use runoff rather than streamflow.
Runoff is the discharge divided by the area of the watershed, which allows for a direct comparison of the streamflow from watersheds of differing sizes. For example, if one watershed is twice the size of another and has twice the streamflow, the runoff of the two watersheds would be the same. Runoff is reported in depth per unit time -- the same as units precipitation which allows runoff to be directly compared to precipitation. For example, if a watershed receives 1500 mm/yr of precipitation and has 1000 mm/yr of runoff, that means 500 mm/yr was lost to evapotranspiration, plus or minus a change in the amount of water stored in the watershed, e.g. in soils.

Relative to the 17-year record, WY17 had above average runoff. WY17 (Oct 1 2016 to Sept 30 2017) featured low runoff in fall and winter, followed by above normal runoff in spring (Figure 30). This was likely due to a very rapid warmup in April of 2017 which caused fast melting of snow, followed by a wet start to summer. However, the wet, cool spring and summer ended in drought conditions across the state in the fall. In fact, the droughty conditions resulted in ground fires (i.e., where roots and organic matter catch fire and smolder) in Chittenden County, a relatively uncommon occurrence. During this period, Lake Champlain water levels were extremely low, causing hazardous navigation in shallow areas.

Overall, runoff in WY17 was greater than the long-term average (Figure 31). Compared to WY16, the cumulative runoff in WY17 was above average for the most of the year, particularly in the spring when runoff was either at or slightly above the long-term average. By May 2017, runoff from both Ranch Brook and West Branch were above the long-term average. Cumulative runoff at both sites continued to be above average for the rest of WY17 as well. The cumulative runoff patterns at the two sites in WY17 were similar to long-term patterns (Figure 31), with both streams generating similar runoff until part way into the spring snowmelt, when West Branch consistently generated greater runoff. Part of the greater snowmelt runoff was from melting of machine-made snow. (Note that water used for snowmaking at the Stowe Mountain Resort is extracted from West Branch upstream of the gage, meaning that when the snow melts, the water is not double-counted). Runoff at West Branch continued to exceed that at Ranch Brook through the summer due to higher sustained base flow (Figure 31).

The most notable aspect of WY17 at both sites was the greater cumulative runoff compared to the long-term record. Between October and Feburary of WY17, the area experienced above-average temperatures, followed by slightly below-average temperatures from March to August, with some extreme warm tempreatures experienced in September (Northeast Regional Climate Center, link in additional resources). 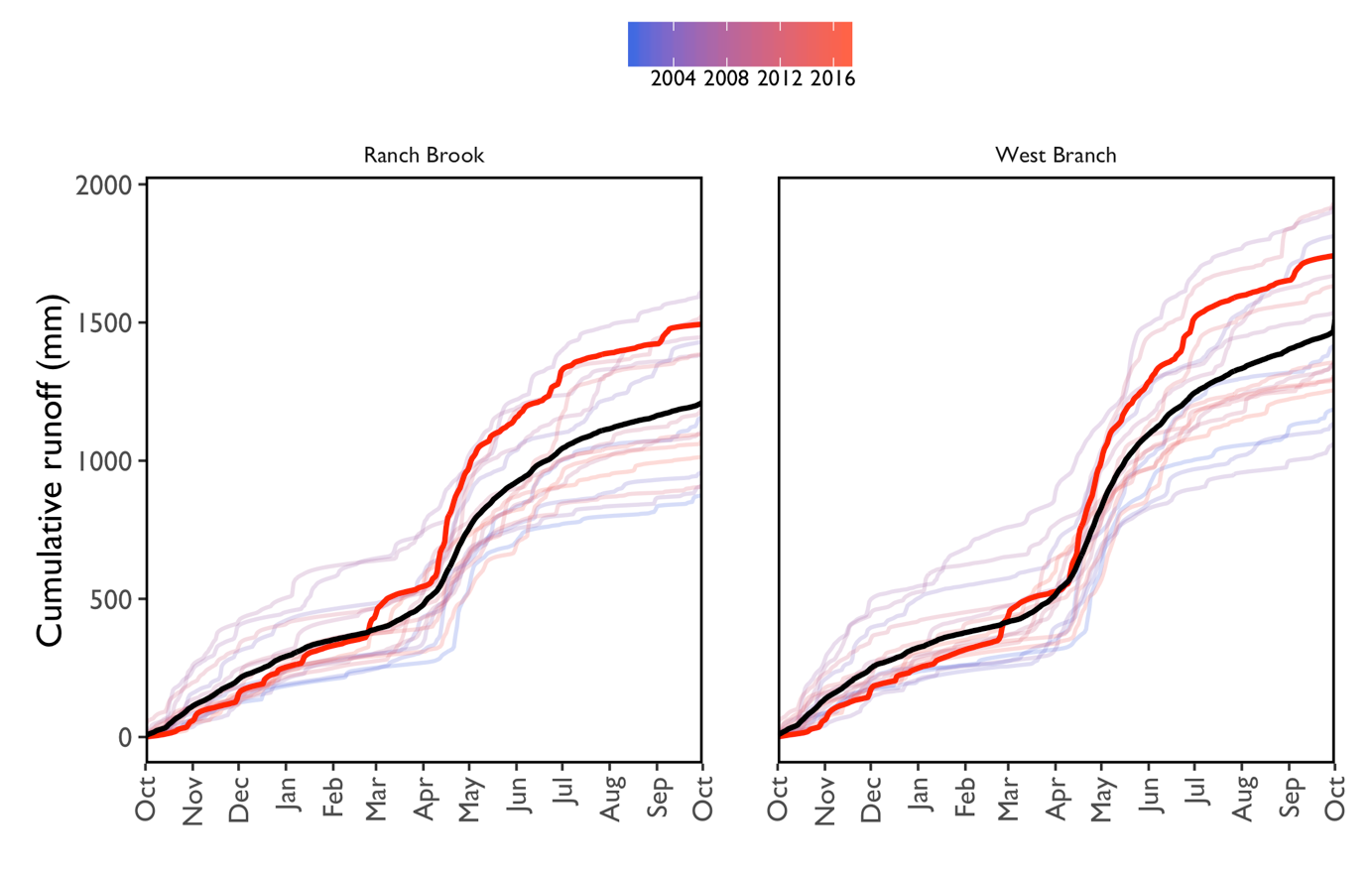 Figure 31. Cumulative runoff at Ranch Brook and West Branch based on the averages across the 17-year record (black line) and for Water Year 2017 only (red line). Faded lines show cumulative runoff for individual years (color denotes the year). 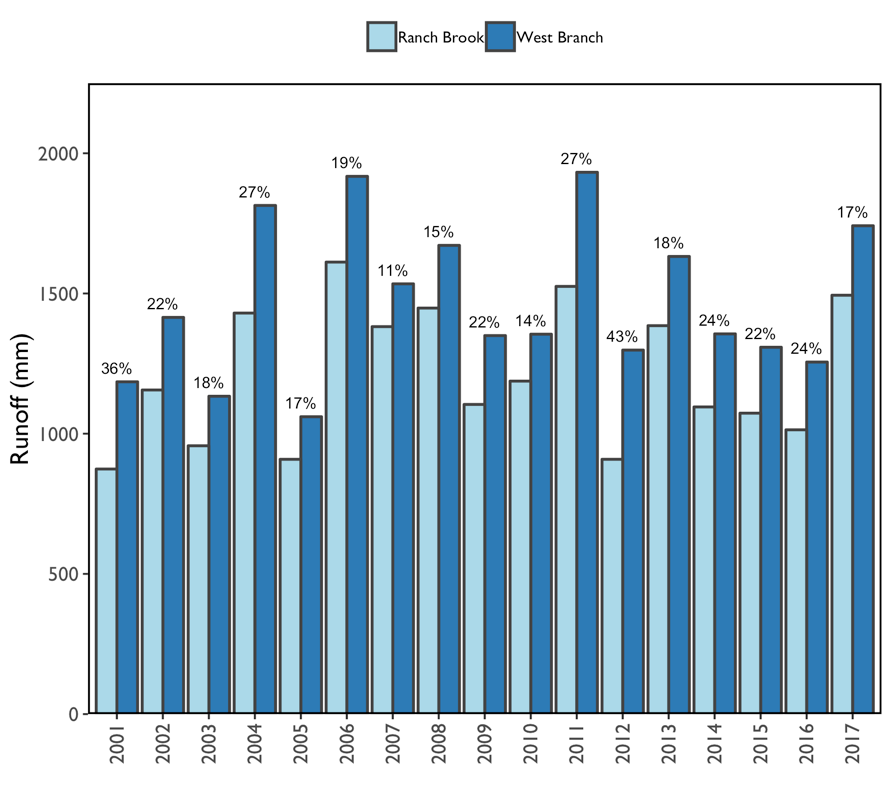 Figure 32. Annual runoff (mm) at Ranch Brook (light blue) and West Branch (dark blue) for the duration of study though the present report year (2001-2017). Percentage of greater runoff at WB relative to RB is given over each pair of bars.

As noted in previous reports, West Branch has consistently yielded higher runoff (flow normalized to watershed area) than Ranch Brook (Wemple et al., 2007) (Figure 31 and Figure 32). Over the long-term, the average difference has been 22% greater runoff at West Branch. The Water Year 2017 differential was 17%, below the long-term average (Figure 32). Greater runoff at West Branch is what we would expect from the creation of open land and development; but the high magnitude of the differential suggests that some part of the difference may be natural. In previous reports, we noted the extreme variability of large summer storms; these may preferentially impact West Branch. FEMC cooperators are currently investigating the role of local meteorology on the flow regimes.

In a first step to assess the hydrologic impact of the resort expansion, we constructed flow duration curves for two three-year periods of approximately equal precipitation, from before and after the construction period (Figure 33). Preliminary analysis suggests that the resort build-out had no clear impact on the hydrology, except for the low-flow regime. Construction of a new snowmaking pond with greater storage has lessened the need to draw water directly from the stream at low flows, thus enabling a higher sustained baseflow in late fall and winter. 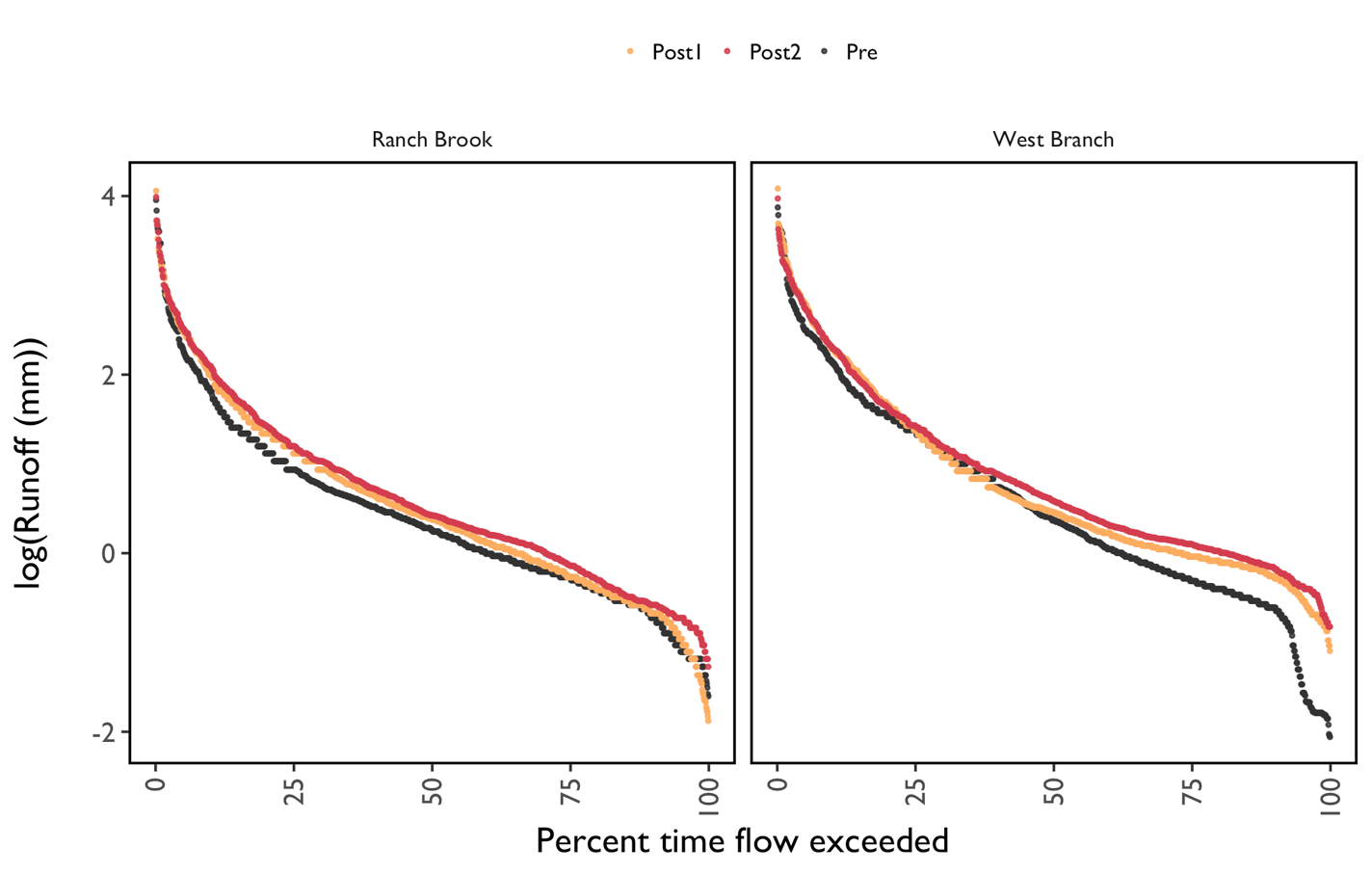 Mountain ecosystems worldwide are increasingly stressed by development of year-round recreational venues, tourism and other development such as communication towers and wind farms. Climate change disproportionally affects these ecosystems with warming temperatures and fewer more intense precipitation events which are increasingly in the form of rain rather than snow. Plants and animals adapted to live at high altitudes suffer. Ski areas with no snowmaking capacity are almost unheard of and certainly not viable and all areas are moving toward becoming year-round operations that rely on golf courses, waterparks, mountain bike trails and other recreational activities that do not require snow. As these build-outs progress there are more impervious surfaces – parking lots, condominiums, and tennis courts – which will alter the patterns, volume, velocity and chemical make-up of runoff.

This study provides valuable information quantifying differences in overall streamflow volumes, peak flows, minimum flows, and timing and duration of each in both an undeveloped and a developed watershed at high elevation. This project has, and will continue, to produce real-world data needed by State regulatory agencies to make data-driven, environmentally sound decisions about development at Vermont’s high elevation sites. Without proper regulatory oversight, safeguards and controls, alterations in streamflow (quantity, velocities, timing, and water quality) can potentially have devastating impacts on aquatic and riparian communities down-stream of highly developed sites. 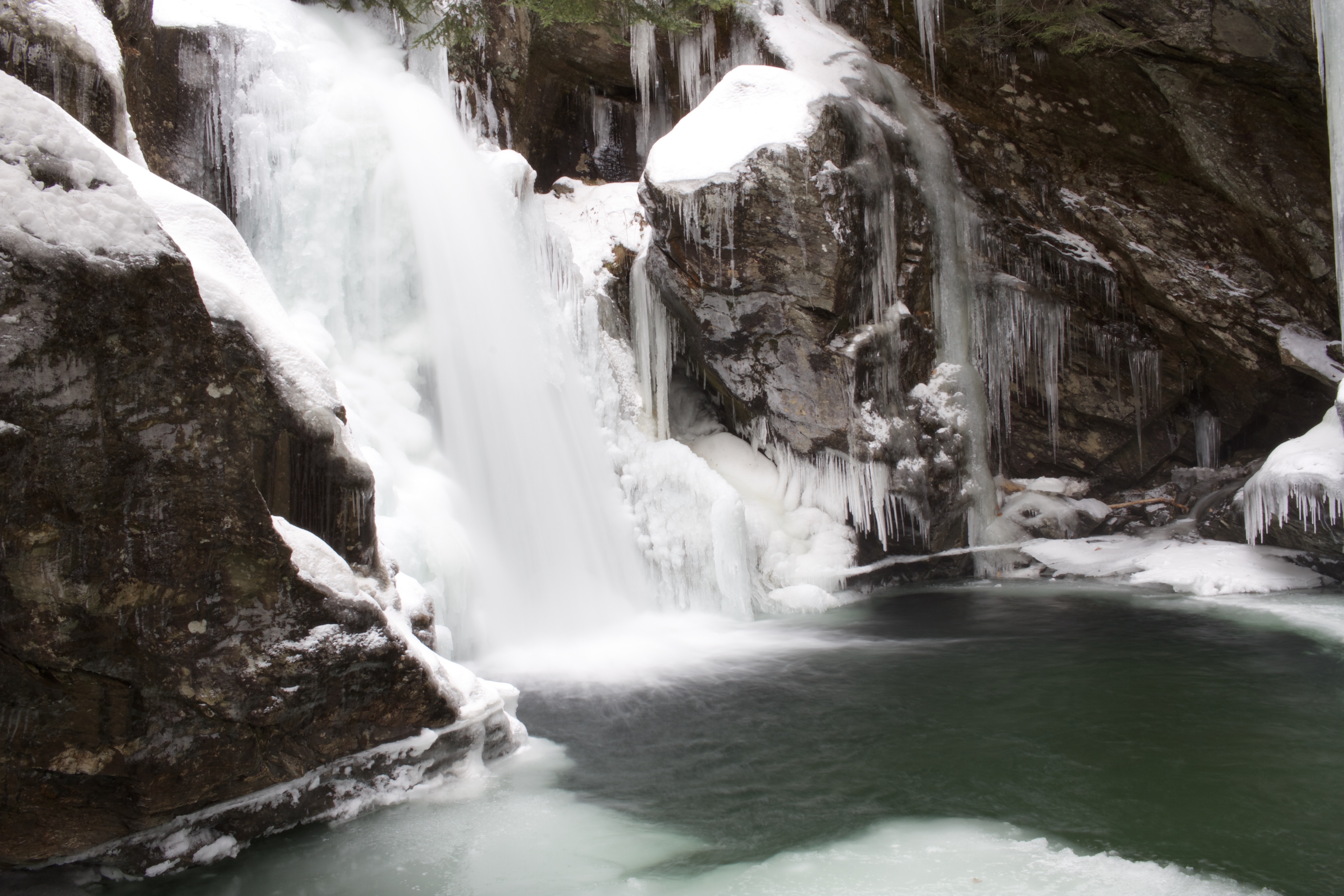