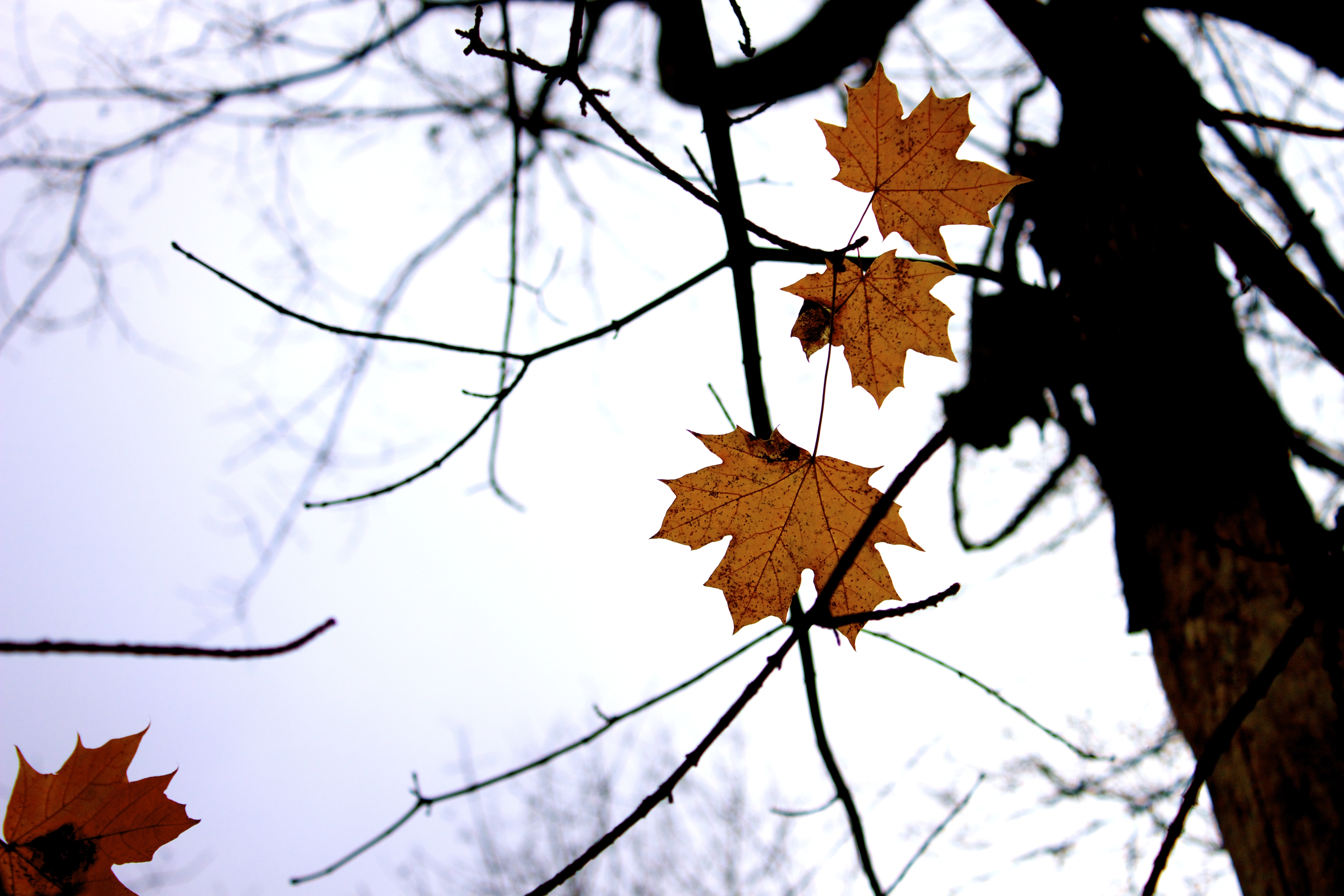 Current FEMC data sets include visual assessments from 1991 to present of sugar maple (Acer saccharum) bud break and fall senescence at two elevations on the western slopes of Mount Mansfield in the Green Mountains of Vermont. Annual phenology assessments start each spring while buds are dormant and continues until leaves are fully expanded. Spring phenology is assessed twice weekly on five dominant sugar maple at the Proctor Maple Research Center, at an elevation of 415 m (1400 feet). Trees are assigned to one of eight bud developmental stages based on an assessment of 10 random buds (Skinner and Parker, 1994) and then averaged to a plot-level mean.

Metrics of fall phenology include visual ratings of percent color and leaf drop, Maple recorded weekly beginning in September on these same trees. Additional sugar maple trees were also monitored at a site above the Underhill State Park at an elevation of 670 m (2200 feet). Percent color is assessed as the proportion of the current leaves exhibiting a color other than green. Percent leaf drop is estimated as the proportion of potential leaves missing. While these are subjective visual estimates, at important stages, such as full color or full leaf drop, the estimates are most reliable. After field data are collected, color estimates are recalculated to represent the proportion of the initial fully foliated crown with color as: 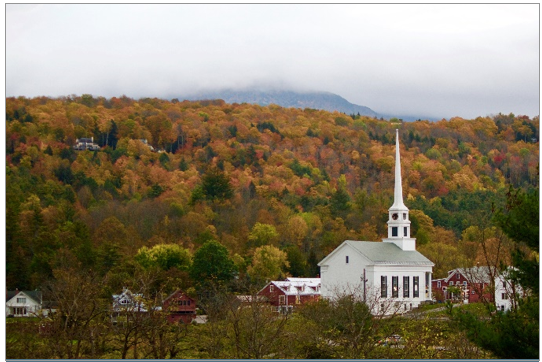 Timing of spring budbreak and fall color are informing us about the impacts of a changing climate here in Vermont.

Fall phenology was similarly examined by comparing the timing of two significant fall phenological events across time: (1) the day of year (DOY) with maximum fall color observed in the canopy; and (2) the day of year (DOY) on which all tree’s leaves had either colored or fallen from the canopy. Yearly anomalies for all phenological events were calculated by comparing each year’s data to the mean value for the entire measurement period. Linear regression was performed to assess the trends in seasonal developmental events across the 26-year period.

Spring phenology in 2017 was similar to the long-term mean and fits a long-term trend toward an earlier start of spring (Figure 8). High variability in our spring phenology data is likely the result of our low sample size (n=5 trees). As such, it is difficult to make statistical inferences for bud burst or leaf out. Nevertheless, there does appear to be a weak but consistent trend for earlier spring phenological measures over the course of our monitoring efforts (Figure 8). 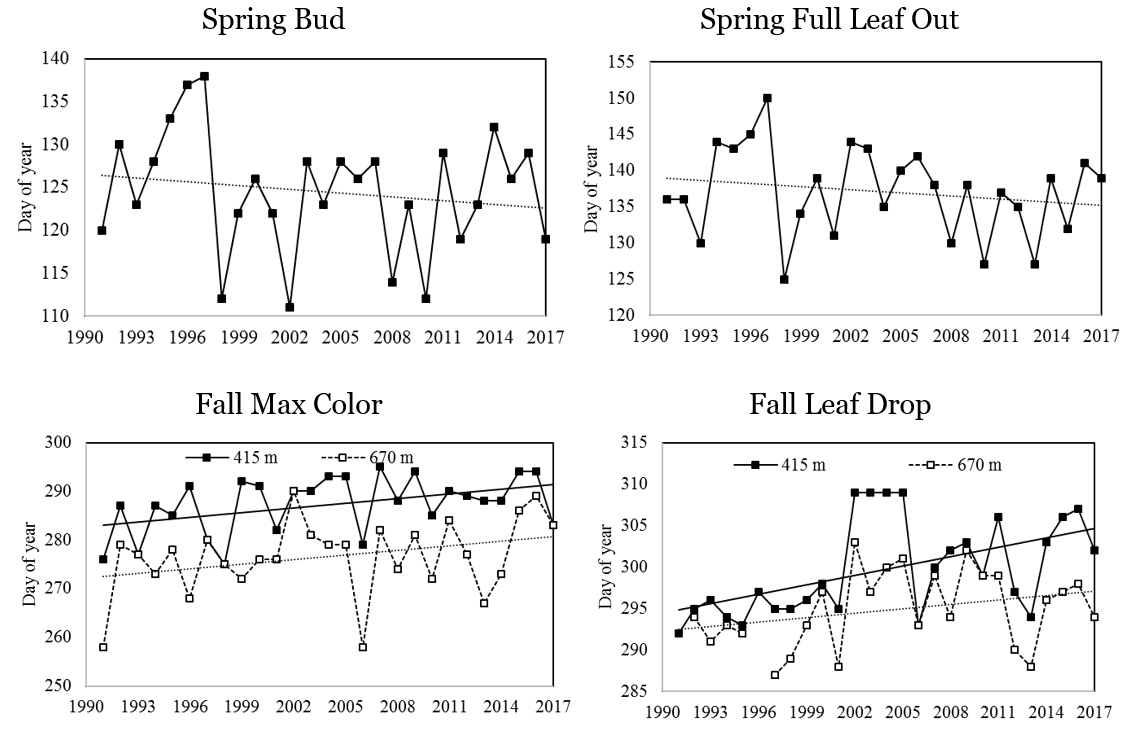 Figure 8. Long-term trends in the timing (mean day of year) of spring and fall phenological events for sugar maple from 1991 to 2017. Spring bud burst (top left) and full leaf out (top right) are assessed yearly at lower elevation (415m), with linear trend line shown. Fall maximum coloration (bottom left) and leaf drop (bottom right) yearly data are shown for sugar maple at two elevations (415m and 670 m) as well as a linear trend line in both.

In the fall, significant trends towards later fall color and leaf drop at lower elevations continued to be observed (Figure 8). The delay of maximum fall colors at low elevations showed consistently later peak foliage over time, culminating in an average delay of 8 days across the data record. Fall leaf drop showed a similar 10-day cumulative delay at low elevations. Interestingly, trees at upper elevations did not show a significant trend of changing fall phenology for either of the fall metrics. This continues to be surprising given that other work has suggested that climate change induced warming may be more severe at higher elevations (Giorgi et al. 1997). Exploring microclimatic differences at each elevation are necessary to tease apart the possible mechanisms behind differing phenological responses of trees at the two sites.

These trends toward earlier springs and later falls are consistent with trends reported in earlier analyses of the FEMC data set (see https://www.uvm.edu/femc/attachments/project/999/reports/SugarMapleSpringPhenology_Mansfield2010.pdf)

There is mounting global evidence for trends of changing vegetation phenology, including earlier spring leaf out and later leaf senescence in the fall, supported by our data. The net effect of these long-term changes in phenology timing is a notable increase in growing season length. It is unclear how these changes may affect forested ecosystems. There are possible implications for water cycling, as earlier springs may escalate evapotranspiration resulting in increased periods of low stream flow during the peak growing season (Daley et al., 2007). Although a longer growing season typically increases forest productivity, carbon sequestration dynamics could be altered by water and nutrient limitations in northern hardwood forests. While expanded growing seasons may benefit some species, it may leave others more vulnerable to climate extremes that occur more often in shoulder seasons. There may also be cascading impacts through forested ecosystems, including phenological asynchrony across taxonomic groups.

The changes we observed in the timing of foliar development carry important economic repercussions for Vermont’s maple syrup and tourism industries. Vermont is the largest producer of maple syrup in the United States, accounting for 41% of the country’s production and earning 50 million dollars in 2011 (Sawyer et al., 2013). Warmer winters and earlier springs are now shortening and advancing the sugaring season (Skinner et al., 2010), and maple syrup producers will need to employ new management techniques for the industry to adapt to the changing climate (Frumhoff et al., 2007; Skinner et al., 2010). 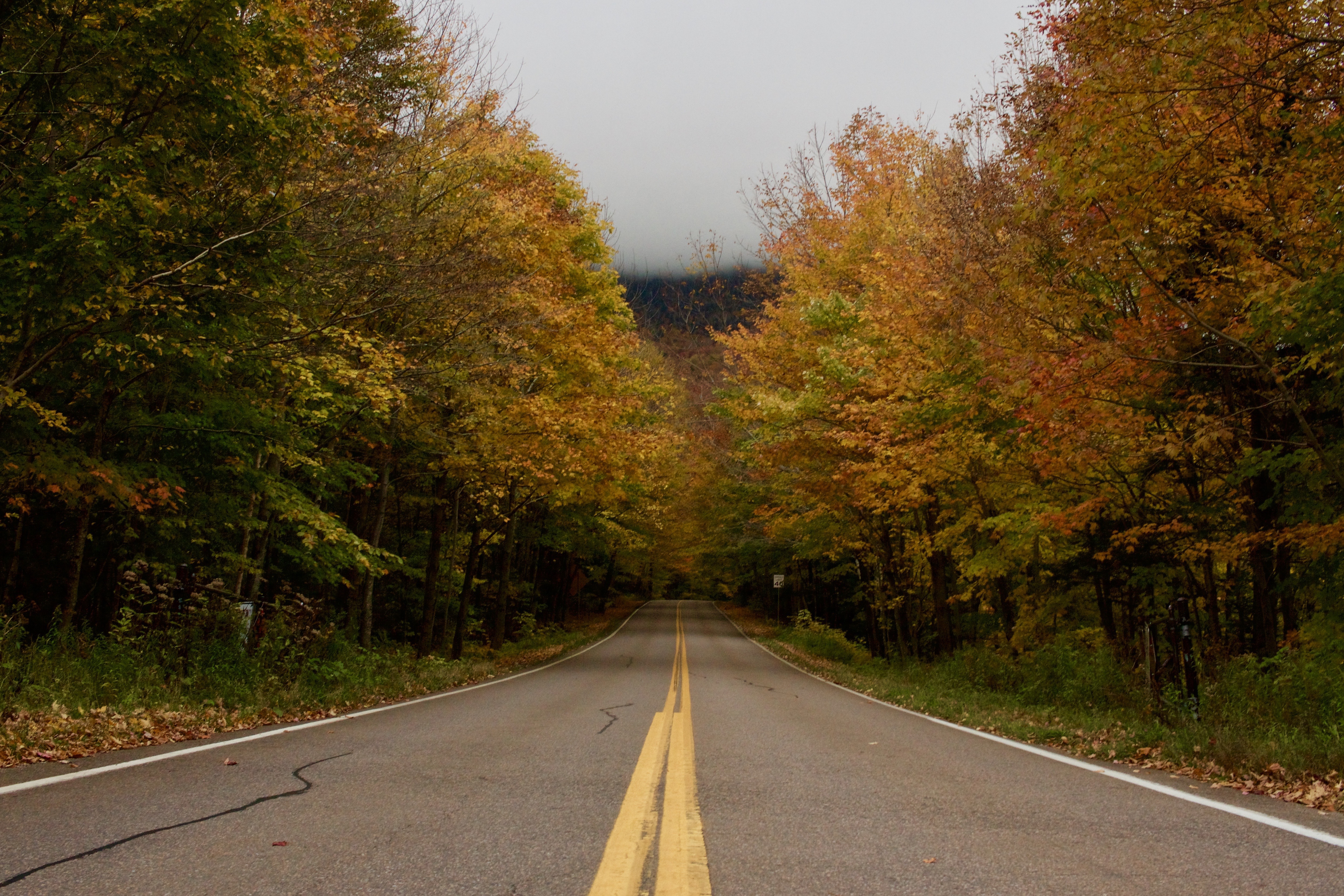